2 _____. 2. _____. ORDER. _____. On APPEAL from: High COURT , Cape Town (Van Reenen J (Yekiso J. concurring) sitting as a COURT of first instance). The following order is made: 1. The APPEAL is dismissed with costs. 2. The costs in paragraph 1 will include in the case of the first and third respondents jointly the costs of two counsel as if they had been represented collectively by two counsel and in the case of the second respondent the costs of one counsel. _____. JUDGMENT. _____. NAVSA JA (VAN HEERDEN, PONNAN, MHLANTLA JJA and WALLIS AJA. concurring): [1] There is no natural or other phenomenon in SOUTH africa quite as iconic as Table Mountain, which stands like a sentinel overlooking the Mother City.

3 The Cape Peninsula National Park, now renamed the Table Mountain National Park (the Park), comprising the mountain and tracts of land beyond it, was established in terms of the National Parks Act 57 of 1976. It borders the northeast corner of portion 7 of the farm Oudekraal (portion 7) and surrounds it on its eastern and southern sides. The development of portion 7 as a township by the appellant, Oudekraal Estates (Pty) Ltd (Estates), is in issue in the present APPEAL . The local authority within whose jurisdiction portion 7 is located and which is responsible for urban planning is the first respondent, the City of Cape Town (the City). [2] The second respondent, the SOUTH African Heritage Resources Agency (SAHRA), established in terms of s 11 of the National Heritage Resources Act 25.

4 Of 1999, is the successor to the National Monuments Council and is statutorily 3. charged with the responsibility of protecting SOUTH africa 's heritage resources which are of cultural significance or other special value for the present community and for future generations. [3] The third respondent, SOUTH African National Parks (SANPARKS), is a statutory body charged with the protection of our country's natural and cultural One of its stated goals is to establish and consolidate the Park to ensure its long-term ecological, economic and social sustainability. The attainment of this goal is premised on a number of objectives, the first of which is to incorporate into the Park all land within the Cape Peninsula Protected Natural Environment (CPPNE), as well as other conservation-worthy areas outside of it.

5 [4] The CPPNE covers an area of approximately 30 000 hectares, running from Signal Hill all the way to Cape Point. The bulk of the CPPNE has already been incorporated into the Park. A part of portion 7 of Oudekraal falls within the cadastral boundaries of the CPPNE. SANPARKS considers it vital that portion 7. be incorporated into the Park. [5] The Park is one of eight areas constituting the Cape Floral Region (the CFR) of SOUTH africa . In 2004 the CFR was listed as a World Heritage site, thereby achieving renewed and elevated recognition as a site of outstanding significance to humanity. The CFR is regarded as the world's hottest hot spot' for plant diversity and endemism. Covering less than of the continental area of africa , it contains nearly 20% of its flora and, in an area smaller than 4% of Southern africa , it has nearly 44% (comprising some 20 000 species) of the sub- continental flora.

6 The CFR has more endemic species of plants than any of the other 18 hotspots' in the world. In addition, it has by far the highest species density and species rarity of any Mediterranean-type climate region in the world. 1. It was established in terms of s 5 of the National Parks Act 57 of 1976, with effect from April 1976. The National Parks Act was repealed on 1 November 2004 by s 90(1) of the National Environmental Management: Protected Areas Act 57 of 2003, but SANPARKS' continued existence was provided for in s 54 of the latter Act. 4. It is indeed one of the richest areas for plant diversity when compared with any similar sized area in the world. [6] The floral vegetation of portion 7 consists of (amongst other species).

7 Coastal Renosterveld, which has been identified as the most critically endangered ecosystem in SOUTH africa . [7] The farm Oudekraal represents one of the few instances in the Peninsula where there is a preserved connection between high altitude zones and the coastline in conservation terms this is known as coast to crest conservation'. This is important not only for aesthetic reasons, but also because it provides protection for the complete set of what are referred to as eco-tonal and habitat changes which occur along steep gradients. [8] Opposite Oudekraal is a deep reef environment which is the breeding ground and habitat of rock lobster and a fish species called Cape Hottentot. Both species are under moderate threat of over-exploitation.

8 There is also a contiguous marine reserve, approved as such, in terms of the Marine Living Resources Act 80 of 1988. The reserve stretches from portion 4 of Oudekraal, which marks the beginning of the CPPNE. At present the portion of coast immediately opposite portion 7 is a buffer zone. It is a conservational imperative to have a buffer zone at the edges of a fully protected nature area because of the natural movement of species. [9] Furthermore, parts of the land around Table Mountain, particularly the ravines below the Twelve Apostle peaks, are of great historical, cultural and religious significance. From the turn of the 18th century, the land was used as a refuge by slaves who had escaped from their masters and the colonial authorities.

9 Among them were Muslim spiritual leaders who had led uprisings against slavery in the Dutch East Indies and who had been captured and brought to the Cape. These leaders taught their disciples in the seclusion and safety of 5. these ravines and in this way fostered and kept Islam alive at the Cape. Prominent leaders who attained spiritual levels equivalent to Christian saints were buried there, these burial places being known as kramats. The kramats are visited regularly by members of the Muslim community who regard that area as sacred. A large number of Muslim graves are also to be found in these parts. [10] Portion 7 lies between Rontree Estate and Llandudno, below the Twelve Apostles peaks and alongside the Cape Atlantic coast.

10 In commercial terms the land in issue would be described as exclusive and prime real estate. Translated into potential monetary value, and given the description of its environs set out above, preceding and present litigation in relation thereto is more readily understandable. The background to that litigation is set out hereunder. [11] The farm Oudekraal was first surveyed in 1818. On 18 August 1836 it was granted into exclusive private possession by way of perpetual quitrent to Michiel van Breda. Thereafter, ownership passed to Dirk Geysbert van Breda. In 1954 it passed from the latter's estate to Sir Henry Price (Price), an English national with business interests in SOUTH africa , for a purchase consideration of 60 000. 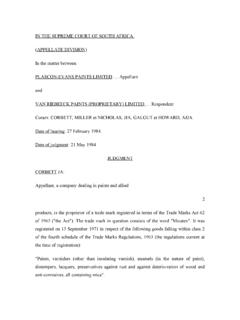 IN THE SUPREME COURT OF SOUTH AFRICA - …

in the supreme court of south africa (appellate division) in the matter between: plascon-evans paints limited .... appellant and van riebeeck paints (proprietary) limited … 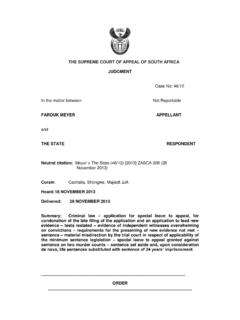 THE SUPREME COURT OF APPEAL OF SOUTH AFRICA JUDGMENT Case No: 46/12 In the matter between Not Reportable FAROUK MEYER APPELLANT 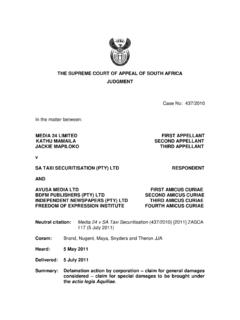 THE SUPREME COURT OF APPEAL OF SOUTH AFRICA JUDGMENT Case No: 437/2010 In the matter between: MEDIA 24 LIMITED FIRST APPELLANT 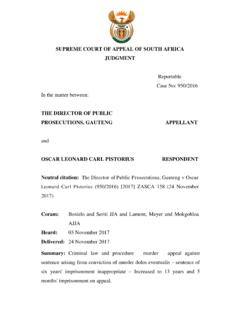 SUPREME COURT OF APPEAL OF SOUTH AFRICA JUDGMENT Reportable Case No: 950/2016 In the matter between: THE DIRECTOR OF PUBLIC PROSECUTIONS, GAUTENG APPELLANT