Inductively Coupled Plasma/Optical Emission Spectrometry Xiandeng Hou and Bradley T. Jones in Encyclopedia of Analytical Chemistry Meyers (Ed.). pp. 9468 9485. John Wiley & Sons Ltd, Chichester, 2000. Inductively Coupled Plasma/Optical Emission Spectrometry 1. Inductively Coupled vaporized, and energized through collisional excitation at high temperature. The atomic Emission emanating Plasma/Optical Emission from the plasma is viewed in either a radial or axial configuration, collected with a lens or mirror, and imaged Spectrometry onto the entrance slit of a wavelength selection device. Single element measurements can be performed cost- Xiandeng Hou and Bradley T. Jones effectively with a simple monochromator/photomultiplier tube (PMT) combination, and simultaneous multielement Wake Forest University, Winston-Salem, USA. determinations are performed for up to 70 elements with the combination of a polychromator and an array detector.

1 Inductively Coupled Plasma/Optical Emission Spectrometry Xiandeng Hou and Bradley T. Jones in Encyclopedia of Analytical Chemistry Meyers (Ed.). pp. 9468 9485. John Wiley & Sons Ltd, Chichester, 2000. Inductively Coupled Plasma/Optical Emission Spectrometry 1. Inductively Coupled vaporized, and energized through collisional excitation at high temperature. The atomic Emission emanating Plasma/Optical Emission from the plasma is viewed in either a radial or axial configuration, collected with a lens or mirror, and imaged Spectrometry onto the entrance slit of a wavelength selection device. Single element measurements can be performed cost- Xiandeng Hou and Bradley T. Jones effectively with a simple monochromator/photomultiplier tube (PMT) combination, and simultaneous multielement Wake Forest University, Winston-Salem, USA. determinations are performed for up to 70 elements with the combination of a polychromator and an array detector.

2 The analytical performance of such systems is competitive 1 Introduction 1 with most other inorganic analysis techniques, especially 2 Theory 2 with regards to sample throughput and sensitivity. Inductively Coupled plasma Operation 2. Inductively Coupled plasma 1 INTRODUCTION. Characteristics 3. 3 Sample Introduction 3 ICP/OES is one of the most powerful and popular Nebulizers 4 analytical tools for the determination of trace elements Hydride Generation 5 in a myriad of sample types (Table 1). The technique is Electrothermal based upon the spontaneous Emission of photons from Vaporization 6 atoms and ions that have been excited in a RF discharge. Chromatographic Couplers 6 Liquid and gas samples may be injected directly into the instrument, while solid samples require extraction or 4 Torch Configuration 7. acid digestion so that the analytes will be present in a Radial View 7. Axial View 7 solution.

3 The sample solution is converted to an aerosol Dual View 7 and directed into the central channel of the plasma . At its core the Inductively Coupled plasma (ICP) sustains a 5 Detection of Emission 7 temperature of approximately 10 000 K, so the aerosol Gratings 7 is quickly vaporized. Analyte elements are liberated The Photomultiplier Tube 10 as free atoms in the gaseous state. Further collisional Array Detectors 11 excitation within the plasma imparts additional energy to Simultaneous Versus Sequential the atoms, promoting them to excited states. Sufficient Detection 12 energy is often available to convert the atoms to ions and 6 Analytical Performance 12 subsequently promote the ions to excited states. Both Analytical Wavelength 12 the atomic and ionic excited state species may then relax Analytical Figures of Merit 12 to the ground state via the Emission of a photon. These Interferences 14 photons have characteristic energies that are determined Acknowledgments 15 by the quantized energy level structure for the atoms or ions.

4 Thus the wavelength of the photons can be used Abbreviations and Acronyms 15. to identify the elements from which they originated. The Related Articles 15 total number of photons is directly proportional to the References 16 concentration of the originating element in the sample. The instrumentation associated with an ICP/OES. system is relatively simple. A portion of the photons emitted by the ICP is collected with a lens or a concave Inductively Coupled Plasma/Optical Emission Spectrometry mirror. This focusing optic forms an image of the ICP on (ICP/OES) is a powerful tool for the determination the entrance aperture of a wavelength selection device of metals in a variety of different sample matrices. such as a monochromator. The particular wavelength With this technique, liquid samples are injected into a exiting the monochromator is converted to an electrical radiofrequency (RF)-induced argon plasma using one of signal by a photodetector.

6 Sugars Other materials Acids, carbon, catalytic materials, electronics, fiber, film, packaging materials, paints and coatings, phosphates, semiconductors, superconducting materials The characteristics of the ICP as an analytical atomic example, have improved by a factor of four to six orders of Emission source are so impressive that virtually all magnitude for many elements. Nevertheless, research and other Emission sources [such as the flame, microwave- commercial opportunities for the further development of induced plasma (MIP), direct current plasma (DCP), ICP/OES remain laser-induced plasma (LIP), and electrical discharge]. have been relegated to specific, narrowly defined appli- Inductively Coupled plasma Operation cation niches. Indeed, even much of the application field originally assigned to atomic absorption Spectrometry As shown in Figure 1, the so-called ICP torch'' is usually (AAS), using both the flame and graphite furnace atomic an assembly of three concentric fused-silica tubes.

7 These absorption Spectrometry (GFAAS), has been relin- are frequently referred to as the outer, intermediate, and quished to the ICP. Compared to these other techniques, inner gas tubes. The diameter of the outer tube ranges ICP/OES enjoys a higher atomization temperature, a from 9 to 27 mm. A water-cooled, two- or three-turn more inert environment, and the natural ability to pro- copper coil, called the load coil, surrounds the top vide simultaneous determinations for up to 70 elements. section of the torch, and is connected to a RF generator. This makes the ICP less susceptible to matrix interfer- The outer argon flow (10 15 L min 1 ) sustains the high- ences, and better able to correct for them when they occur. temperature plasma , and positions the plasma relative to In cases where sample volume is not limited, ICP/OES the outer walls and the induction coil, preventing the walls provides detection limits as low as, or lower than its from melting and facilitating the observation of Emission best competitor, GFAAS, for all but a few elements.

8 Signals. The plasma under these conditions has an annular Even for these elements, the simplicity with which the ICP/OES instrument is operated often outweighs the loss in sensitivity. Height Tail plume T (K) (cm). 5800 3. Normal analytical zone 6200 2. Initial radiation zone 2 THEORY 7000 1. Preheating zone 10 000 0. Induction The ICP was developed for optical Emission spectrom- RF coil region etry (OES) by Fassel et al. at Iowa State University in the US and by Greenfield et al. at Albright & Wilson, Ltd. in the UK in the ,4,5/ The first commer- cially available ICP/OES instrument was introduced in 1974. The ICP is now not only the most popular source for OES but it is also an excellent ion source for induc- tively Coupled plasma mass Spectrometry (ICPMS)..6/ Sample aerosol ICP/OES is a proven commercial success, and the future Figure 1 Schematic diagram of an ICP assembly showing the is still bright for ICP-based spectroscopic techniques.

9 Three concentric tubes composing the torch, the RF coil, the Detectability has been continuously and dramatically different plasma regions, and the temperature as a function of improved over the past 35 years. Detection limits, for height above the load coil. Inductively Coupled Plasma/Optical Emission Spectrometry 3. shape. The sample aerosol carried by the inner argon flow species. These excitation and ionization processes occur ( L min 1 ) enters the central channel of the plasma predominantly in the initial radiation zone (IRZ), and and helps to sustain the shape. The intermediate argon the normal analytical zone (NAZ) from which analytical flow (0 L min 1 ) is optional and has the function of Emission is usually lifting the plasma slightly and diluting the inner gas flow in the presence of organic solvents. Inductively Coupled plasma Characteristics The ICP is generated as follows.

10 RF power, typically 700 1500 W, is applied to the load coil and an alternating The main analytical advantages of the ICP over other exci- current oscillates inside the coil at a rate corresponding tation sources originate from its capability for efficient and to the frequency of the RF generator. For most ICP/OES reproducible vaporization, atomization, excitation, and instruments, the RF generator has a frequency of either ionization for a wide range of elements in various sample 27 or 40 MHz. The oscillation of the current at this high matrices. This is mainly due to the high temperature, frequency causes the same high-frequency oscillation of 6000 7000 K, in the observation zones of the ICP. This electric and magnetic fields to be set up inside the top temperature is much higher than the maximum tempera- of the torch. With argon gas flowing through the torch, a ture of flames or furnaces (3300 K). 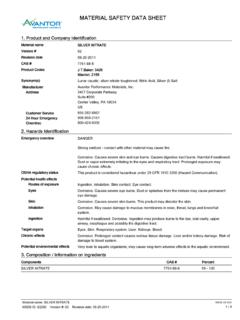 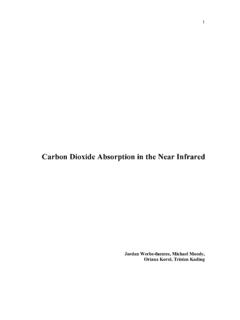 Carbon Dioxide Absorption in the Near Infrared

5 anthropogenic CO 2 emissions from burning fossil fuels and increases in the retention of the sun’s radiation through the greenhouse effect. Much attention has been given to the CO 2 absorption band at 15 microns because this absorption peak has high absorptivity placed in the far-IR region, and the 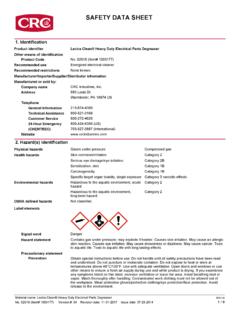 6. Accidental release measures Keep unnecessary personnel away. Keep people away from and upwind of spill/leak. Keep out of low areas. Many gases are heavier than … 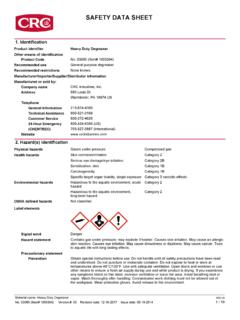 6. Accidental release measures Keep unnecessary personnel away. Many gases are heavier than air and will spread along ground and collect in low or confined areas (sewers, basements, tanks). 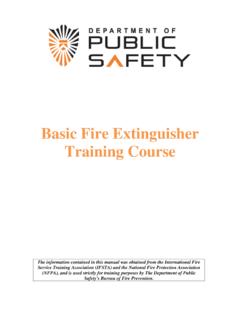 Basic Fire Extinguisher Training Course The information contained in this manual was obtained from the International Fire Service Training Association (IFSTA) and the National Fire Protection Association (NFPA), and is used strictly for training purposes by The Department of Public