Information on PLASMA EXCHANGE or Plasmapheresis What is PLASMA ? PLASMA is the fluid portion of the blood that allows the circulation of red blood cells, white blood cells, and platelets. It consists mainly of water in which numerous chemical compounds are dissolved. PLASMA also makes possible chemical communication among different parts of the body by carrying minerals, hormones, vitamins, and antibodies. Normal PLASMA has a yellow color when it is observed through a test tube or bag where blood has settled. What Is PLASMA EXCHANGE or Plasmapheresis? PLASMA EXCHANGE is a patient procedure involving the separation and removal of the PLASMA from the blood in order to remove a disease substance circulating in the PLASMA . The red blood cells, white blood cells, and platelets are returned to the patient, along with a prescribed replacement fluid.

Information on Plasma Exchange or Plasmapheresis What is Plasma? Plasma is the fluid portion of the blood that allows the circulation of red blood cells, white

1 Information on PLASMA EXCHANGE or Plasmapheresis What is PLASMA ? PLASMA is the fluid portion of the blood that allows the circulation of red blood cells, white blood cells, and platelets. It consists mainly of water in which numerous chemical compounds are dissolved. PLASMA also makes possible chemical communication among different parts of the body by carrying minerals, hormones, vitamins, and antibodies. Normal PLASMA has a yellow color when it is observed through a test tube or bag where blood has settled. What Is PLASMA EXCHANGE or Plasmapheresis? PLASMA EXCHANGE is a patient procedure involving the separation and removal of the PLASMA from the blood in order to remove a disease substance circulating in the PLASMA . The red blood cells, white blood cells, and platelets are returned to the patient, along with a prescribed replacement fluid.

2 Simply stated, the old PLASMA is removed and replaced by the new PLASMA . In other words, there has been a PLASMA EXCHANGE . Why Is PLASMA EXCHANGE Necessary? Some diseases create substances which circulate throughout the body in the PLASMA portion of the blood. In certain diseases these substances are called auto-antibodies , or antibodies which attack healthy cells or tissue. These auto-antibodies are created by a mix-up in the body's immune system. Other diseases cause an overproduction of protein which results in slowing down the blood flow (in the same way that thick liquids move more slowly that thin ones). A physician will decide if it is desirable to remove a large quantity of the auto-antibodies or excess proteins so accompanying medical therapy is more effective in controlling the disease.

3 Only in a few diseases is it possible to remove the specific substance causing the disease. However, it is possible to remove the PLASMA which contains the substance. The PLASMA is replaced with donated fresh frozen PLASMA or, more commonly, physiologically acceptable replacement fluids, such as a mixture of albumin and normal saline. What Actually Happens During A PLASMA EXCHANGE Procedure? PLASMA EXCHANGE is accomplished with a medical device called a blood cell separator. Blood cell separators use a centrifuge or a membrane filter to separate PLASMA from cellular blood components. Qualified medical personnel operate the blood cell separator and monitor the condition of the patient at all times. Blood is usually drawn from a patient's arm vein by a needle which is attached to a blood tubing set.

4 Anticoagulant is added to the blood to keep it from clotting. The blood and anticoagulant enter the compartment of the blood cell separator where the PLASMA is separated from the cellular components and pumped into a collection bag. The cellular components are drawn from the compartment and a replacement fluid prescribed by the physician is added to replace the volume of PLASMA which is removed. The mix of cellular components and replacement fluid is returned to the patient, usually through a needle in the other arm. The latest technology blood cell separators accomplish all the above steps in an automated, continuous, and safe manner. The sterile tubing sets and needles are used one time only and then discarded. Some Difficulties Which May Arise Sometimes it is not possible to achieve adequate blood flow from veins in the arms.

5 Therefore, alternative blood access, which might involve some minor surgery, will be necessary. Although the latest technology blood cell separators remove only a small portion of blood from the patient ay any one time, the changes in blood volume or the type of replacement fluid utilized may make some patients feel dizzy or light-headed. Patients should immediately tell the medical staff if they begin to feel uncomfortable. The anticoagulant used to keep the blood from clotting and certain types of replacement fluids might cause a patient to notice a sour taste in the mouth, tingling around the lips, or sharp pains, like pins being stuck in the fingers or toes. Patients should immediately tell the medical staff if they have any of these symptoms.

6 Other Questions Frequently Asked Q. Will there be any pain? A. The initial insertion of the needles may cause some discomfort. The needles have to remain in place during the procedure (about two to four hours). Keeping the arms in one position and staying relatively still may be uncomfortable. Q. Is PLASMA EXCHANGE a safe medical procedure? A. Approximately 200,000 PLASMA EXCHANGE procedures are performed world wide each year with few problems. Another one million procedures, which are similar to PLASMA EXCHANGE , are performed each year on volunteer donors for PLASMA and platelets, again with few problems. Q. Are there any reactions or lasting side effects? A. Some patients feel fired after a PLASMA EXCHANGE procedure and require rest.

7 Side effects during the procedure might include feeling dizzy, light-headed, nauseous, and cold. Some patients may feel tingling in the fingers and around the mouth. It is extremely important for patients to notify the medical staff immediately if they feel these symptoms or feel uncomfortable. The medical staff can slow down or stop the procedure for a short time before deciding whether to continue. Q. How long does PLASMA EXCHANGE take? A. This varies from patient to patient and with the type of blood cell separator utilized. The latest technology blood cell separators usually perform a PLASMA EXCHANGE in approximately two hours. Q. Are patients left on their own? A. No. The medical staff will be there all the time. A physician will generally examine a patient before the procedure begins and will be available nearby throughout the procedure.

8 Q. How often will PLASMA EXCHANGE need to be performed? A. The number of PLASMA exchanges varies, according to the disease being treated and patient response. The physician monitors the clinical response and determines the necessary number and frequency of PLASMA exchanges to be performed. Q. Can patients catch a disease from the supplies being used? A. No. The blood tubing set and needles are sterile, used one time only, and discarded. Anticoagulant, normal saline, and albumin replacement fluid are also sterile solutions. There is some risk of disease transmission when fresh frozen PLASMA issued as a replacement fluid. Q. Can a patient have something to eat or drink during a procedure? A. There's generally no reason why most chronically treated patients can't eat or drink something during the procedure.

9 The medical staff will help you. A patient should drink some fluids and use the bathroom before the procedure begins. Q. Can a patient have visitors? A. Once the procedure is underway, most patients can usually have visitors. Reviewed for publication by the Medical Advisory Board of the Myasthenia Gravis Association of Western Pennsylvania. 2009. 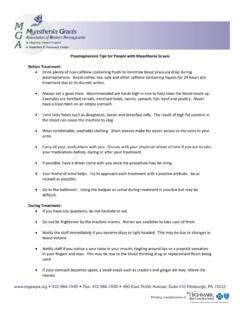 Plasmapheresis Tips for People with Myasthenia …

With, Treatment, People, Before, Myasthenia, Gravis, Plasmapheresis, People with myasthenia gravis before treatment 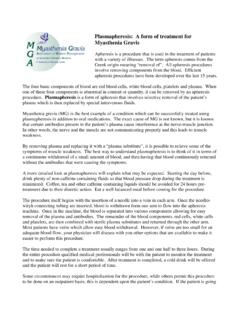 Plasmapheresis: A form of treatment for Myasthenia …

Plasmapheresis: A form of treatment for Myasthenia Gravis Apheresis is a procedure that is used in the treatment of patients with a variety of illnesses. 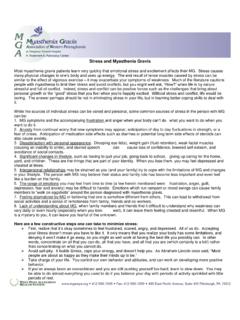 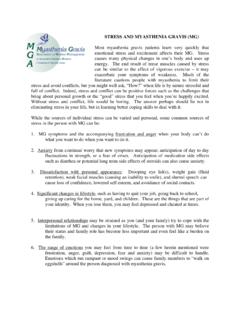 list of your questions and symptoms that you want to mention. This can help prevent the stress of “Why didn’t I remember to ask about . . . .?” Many anxieties and fears 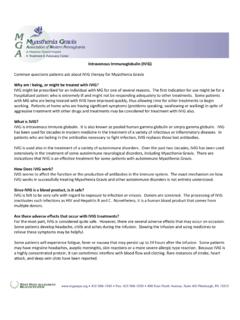 Intravenous Immunoglobulin (IVIG) Why am I …

Intravenous Immunoglobulin (IVIG) Common questions patients ask about IVIG therapy for Myasthenia Gravis Why am I being, or might be treated with IVIG? 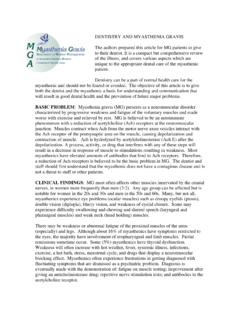 DENTISTRY AND MYASTHENIA GRAVIS The authors prepared this article for MG patients to give to their dentist. It is a compact but comprehensive review

Nutritional Needs of the Individual With …

Thymectomy: A form of treatment for Myasthenia … 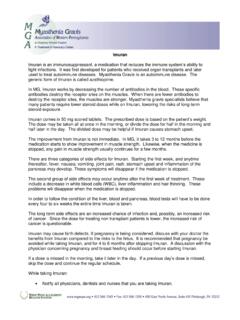 Imuran - The Myasthenia Gravis of Western …

Imuran Imuran is an immunosuppressant, a medication that reduces the immune system’s ability to fight infections. It was first developed for patients who received organ transplants and later

So how do you beat the heat and still enjoy summer? Are ...

Unfortunately those warm days can be a challenge on the bodies of those affected by Myasthenia Gravis. So, here are a few tips to help take care of yourself and enjoy summer as 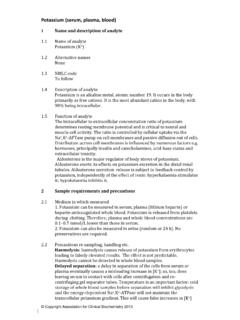 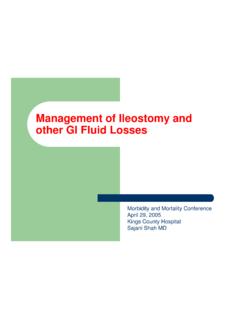 Management of Ileostomy and other GI Fluid Losses

Normal Exchange of Fluid & Electrolytes zSalt exchange: – Average adult consumption varies between 50 to 90 meq of Sodium Chloride per day. Balance is maintained by renal excretion of excess salt. – Losses occur mostly from the GI tract: zGI losses are usually isotonic or slightly hypotonic and should be replaced by an isotonic salt solution.

Management, Other, Exchange, Management of ileostomy and other, Ileostomy 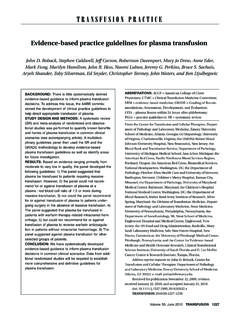 Evidence based practice guidelines for plasma …

Human Breathing System In mammals the gas exchange surfaces are the lungs, which develop in the embryo from the gut wall - which relates us to some fossil fish! 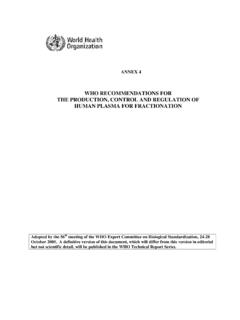 WHO RECOMMENDATIONS FOR THE …

ANNEX 4 WHO RECOMMENDATIONS FOR THE PRODUCTION, CONTROL AND REGULATION OF HUMAN PLASMA FOR FRACTIONATION Adopted tby the 56 h meeting of the WHO Expert Committee on Biological Standardization, 24-28 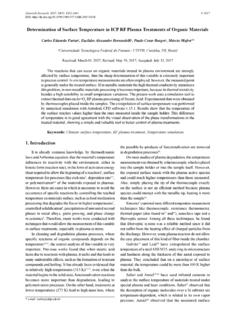 etermination o urace Temperature in P RF Plasma Treatments o rganic Materials 1433 temperature by IR camera was slightly higher than the one measured above the subtract with a thermocouple. 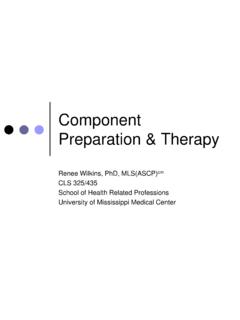