2 Contents Answers to Frequently Asked Questions.. 4. What Options do I have for treating my ash trees? .. 4. I know my tree is already infested with EAB. Will insecticides still be effective? .. 4. My ash tree looks fine but EAB has been detected in the vicinity of my property. Should I start treating my tree?.. 4. When is the best time to treat my trees? .. 5. How can I convince my community that action must be taken before it is too late to save the ash trees?.. 6. I realize that I will have to protect my ash trees from EAB for several years. Is it worth it? .. 7. Insecticide Options for Controlling EAB .. 7. My customers want to know about the environmental effects of systemic insecticides used to protect ash trees from .. 7. Using Insecticides to Control EAB .. 8. Soil-Applied Systemic Insecticides .. 8. Trunk-Injected Systemic Insecticides .. 10. Noninvasive, Systemic Basal Trunk Sprays .. 10. Protective Cover Sprays .. 11. How Effective Are Insecticides for Control of EAB?

4 Surveys continue and trees. additional infestations will be found as EAB. Our understanding of how EAB. continues to invade North America. Ash trees can be managed successfully with are common in urban landscapes and resi- insecticides has advanced since dential areas across much of the continental this bulletin was initially published US. Many homeowners, tree care profession- in 2009. This version has been revised to als, and municipalities would like to protect address frequently asked questions and valuable ash trees from EAB. reflect the current state of understanding of Since 2002, our ability to control EAB and Insecticide Options for controlling EAB and effectively protect ash in the landscape has their effectiveness. It is important to note that progressed substantially. Scientists have research is an ongoing process. Scientists learned much about this insect and how it from universities, government agencies and interacts with its host trees.

5 New Insecticide companies will continue to make discover- products and application methods have been ies and advance EAB management and ash developed and tested. Results of field trials conservation. Herms, McCullough, Smitley, Sadof, Cranshaw 3. Answers to Frequently thin because fewer leaves can be supported by the tree. Large branches or even the Asked Questions trunk can be girdled and killed by the larval galleries. What Options do I have for treating my ash trees? Multi-year studies have shown that if more than 50% of the canopy has been killed by Several Insecticide Options are available to EAB or if the canopy appears to be thin and effectively treat landscape ash trees threat- carrying less than half as much foliage as it ened by EAB. Products listed in Table 1 have should, it is probably too late to save the been evaluated by university and govern- tree. The ability of trees to recover from low ment scientists in field trials. Keep in mind, to moderate EAB injury can vary, depend- however, that controlling insects that feed ing on the extent of the damage and which under the bark with insecticides has always control Options are used.

6 Studies have also been challenging. This is especially true with shown that if the canopy of a tree is already EAB because most of our native North Ameri- declining when Insecticide treatments are can ash trees have little natural resistance to initiated, the condition of the tree may this pest. Effective control of EAB requires continue to deteriorate during the first year some care when selecting an Insecticide of treatment. If treatment is effective, the product and application method to ensure tree canopy will usually begin to improve in the product is applied at the proper rate and the second year of treatment. This lag in the time. reversal of canopy decline probably reflects the time needed for the tree to repair its I know my tree is already infested with vascular system after the EAB infestation has EAB. Will insecticides still be effective? been reduced. It is best to begin using insecticides while ash trees are still relatively healthy. By the My ash tree looks fine but EAB has time most people notice canopy thinning or been detected in the vicinity of my dieback, EAB has already caused consider- property.

7 Should I start treating my ably injury to the vascular system of the tree. tree? An effective Insecticide may stop additional Detecting new EAB infestations and identify- damage, but it cannot reverse damage that ing ash trees that have only a few larvae is has already occurred and it takes time for very difficult. Ash trees with low densities of trees to recover. Most insecticides used for EAB larvae often have few or even no exter- EAB control act systemically - the insecti- nal symptoms of infestation. In addition, cide must be transported within the tree. In scientists have learned that most female EAB. other words, a tree must be healthy enough lay their eggs on nearby trees, within 100. to carry a systemic Insecticide up the trunk yards of the tree from which they emerged. and into the branches and canopy. Trees are A few female beetles, however, appear to damaged by EAB larvae feeding in galler- disperse much further, anywhere from ies under the bark.

8 These galleries injure the miles to 2-3 miles. Therefore, if your property phloem and xylem tissue that plants use to is within 10-15 miles of a known EAB infes- transport nutrients and water. A few galleries tation, your ash trees are probably at risk. have only a small effect on most trees. As the If your ash trees are more than 10-15 miles EAB population grows and more larvae feed beyond an infestation, it is probably too early on a tree, however, the galleries interfere with to begin Insecticide treatments. Treatment the ability of the tree to transport nutrients programs that begin too early waste money and water, as well as insecticides. As a tree and result in unnecessary use of Insecticide . becomes more and more infested, the injury Conversely, treatment programs that begin becomes more severe. Canopies become too late will not be as effective. 4 Insecticide Options FOR Protecting ASH TREES FROM Emerald ASH Borer . Remember, however, that new EAB infesta- tions have been discovered every year since 2002 and existing EAB populations will build and spread over time.

9 Quarantine maps found on the website can help you stay up-to-date regard- ing locations of known infestations. You can use the links in this website to access spe- cific information for individual states. When an EAB infestation is detected in a state or county for the first time, it will be added to these quarantine maps. Note, however, that once EAB has been found in a county, surveys by regulatory officials end. Similarly, once an entire state is declared to be infested, regulatory surveys may cease. Therefore, quarantine maps may or may not adequately reflect the current dis- tribution of EAB in such areas. Personnel from city, county or state agencies sometimes con- tinue to survey or monitor local EAB infesta- tions. City foresters, county extension offices or state departments of agriculture may have information on local EAB distribution. There is no substitute for local knowledge and tree care professionals should actively monitor changes in the condition of local ash trees.

10 When is the best time to treat my trees? As with any pest management effort, optimal timing is required to achieve best control. Two life stages of EAB are targeted by laying eggs. This provides a window of Ash trees on a street treatments: adult beetles and young larvae. in Toledo in 2006 and opportunity to control the adults before any Therefore, systemic Insecticide applications new eggs or larvae are produced. The onset 2009 before and after should be made in time to allow for uptake being impacted by of adult beetle emergence begins from early EAB. and distribution of the Insecticide within the May (southern Ohio) to early June (central tree to ensure adult beetles and very young Michigan) and peaks two to three weeks larvae encounter the toxin. Non-systemic later. Beetle emergence may begin sooner at cover sprays, which are less commonly used, locales farther south or later in more northern should be applied to foliage to target adult areas. Regardless of location, emergence beetles, as well as the trunk and branches to of adult EAB consistently begins at 450-550. 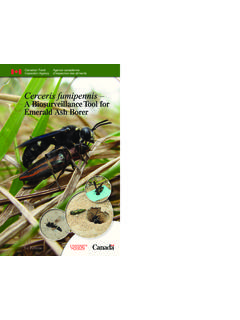 Signs and Symptoms of the Emerald Ash Borer - December …

Signs and Symptoms of Emerald Ash Borer MSU is an affirmative-action, equal-opportunity institution. Michigan State University Extension programs and materials are open to all without regard to race, color, 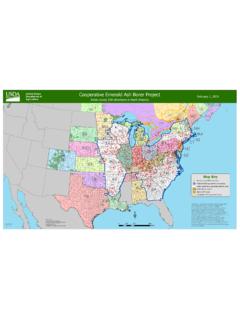 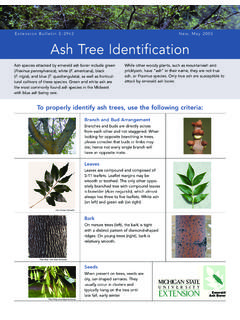 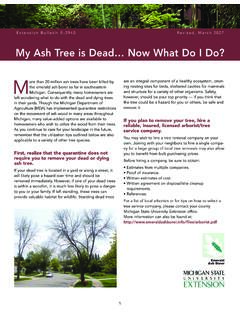 My Ash Tree is Dead… Now What Do I Do?

1 My Ash Tree is Dead… Now What Do I Do? Extension Bulletin E-2940 Revised, March 2007 M ore than 20 million ash trees have been killed by the emerald ash borer so far in southeastern

What, Dade, Tree, Now what do i do, My ash tree is dead

Distinguishing Ash from Other Common Trees

1 Distinguishing Ash from other Common Trees Identification key Begin at number 1 on the key and choose (a) or (b). Then proceed to the number listed in …