In addition to international treaties and conventions, other instruments, such as free trade agreements, require member countries to comply with specific obligations. Building on This circular provides a brief overview1 of the international conventions, treaties, and other bilateral instruments that the United States

2 And it details the participation of other The United States is a member of many treaties and con- countries in these same instruments. ventions affecting Copyright . The World Intellectual Property Organization (WIPO) administers the Berne Convention for the Protection of Literary and Artistic Works; the WIPO. Copyright Treaty; the WIPO Performances and Phonograms Treaty; the Geneva Convention for the Protection of Produc- ers of Phonograms Against Unauthorized Duplication of Their Phonograms; and the Brussels Convention Relating to the Distribution of Program-Carrying Signals Transmitted by Satellite.

3 The United Nations Educational, Scientific, and Cultural Organization administers the Universal Copyright Convention. The World Trade Organization administers the Agreement on Trade-Related Aspects of Intellectual Property Rights (TRIPS), which sets forth obligations related to intellectual property rights, including Copyright and enforcement mea- sures, in the context of a multilateral trade agreement. The treaties and conventions noted above include sub- stantive obligations . Many also define points of attachment, . the factors that connect an eligible work to be protected among treaty member countries.

4 An author's nationality or the place a work was first published are examples of points of attachment. Sections 104 and 104a of the Copyright Act specify the scope of protection for unpublished and pub- lished foreign works. In addition to International treaties and conventions, other instruments, such as free trade agreements, require member countries to comply with specific obligations . Building on TRIPS, the free trade agreements concluded by the United States require the parties to have robust Copyright laws and w enforcement measures. A bilateral free trade agreement between the United States and another country does not usually create a first point of attachment for a work in that other country, or vice versa (the two parties are usually already members of International treaties).

5 Specific facts, cir- cumstances, and national laws are important in any International Copyright analysis. Recent International developments have resulted in two new WIPO Copyright treaties: the Bei- jing Treaty on Audiovisual Performances and the Marrakesh Treaty to Facilitate Access to Published Works for Persons Who Are Blind, Visually Impaired, or Otherwise Print Disabled. If you seek Copyright protection for your work in another country, it is important to deter- mine the points of attachment under that country's Copyright system. If possible, do this before your work is published anywhere, because protection may depend on the facts existing at the time of first publication.

6 The scope of protection available in that country will then turn on the substantive pro- visions available under that country's law and practice. Keep in mind, however, that some countries offer little or no Copyright protection to foreign works. For more information on the scope of Copyright protection provided by other countries, you may want to consult a legal expert familiar with foreign and Copyright laws. The Copy- right Office is not permitted to recommend attorneys or agents to give legal advice on foreign or domestic laws. Relations as of March 2019. This publication documents the countries that are parties to specific multilateral Copyright conven- tions or agreements, as well as those that have specific bilateral relationships with the United States.

7 The relevant agreements and their abbreviations are listed below. A list of countries follows, indicat- ing which agreements each country has signed and the date each agreement took effect. Agreements and Treaties BAC Buenos Aires Convention of 1910. U. S. ratification deposited with the government of Argen- tina, May 1, 1911; proclaimed by the president of the United States, July 13, 1914. Berne Berne Convention for the Protection of Literary and Artistic Works. The Berne Convention, which was first accepted in 1886, has been revised numerous times. Notable revisions were made at Berlin on November 13, 1908; at Rome on June 2, 1928; at Brussels on June 26, 1948; at Stockholm on July 14, 1967; and at Paris on July 27, 1971 (which were subsequently amended on September 28, 1979).

8 Accordingly, the list of countries includes in a parenthetical the latest act of the convention to which the country is party. For example, the substantive provisions of Berne (Paris) include articles 1 to 21. and the appendix; articles 22 to 38 deal with administrative provisions of the convention. The effec- tive date for adherence to the Berne Convention is March 1, 1989. Bilateral Bilateral Copyright Relations with the United States by virtue of a proclamation or treaty. Where there is more than one proclamation or treaty, only the date of the first one is given.

The Digital Millennium Copyright Act of 1998

The Digital Millennium Copyright Act of 1998 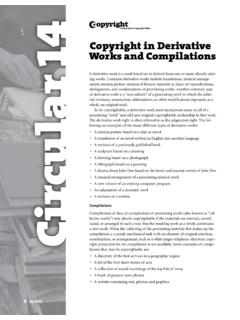 Copyright Registration for Derivative Works · 3 who actually created the work. Where the work or any con-tribution to it is a work made for hire, the employer is con- 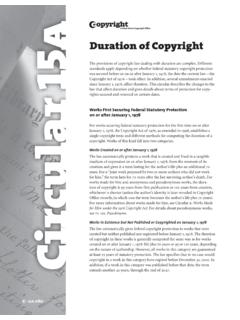 Duration of Copyright · 2 Works Already Under Statutory Protection before 1978 For works that had already secured statutory copyright pro-tection before January 1, 1978, the 1976 Copyright Act retains

TITLE I—AMENDMENTS TO THE INDI- VIDUALS …

w copyright.gov CIRCULAR 1 Copyright is a form of protection provided by the laws of the United Statesto the authors of “original works of authorship” 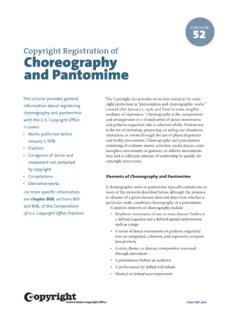 medium of expression.1 Choreography is the composition and arrangement of a related series of dance movements and patterns organized into a coherent whole.

3. Send the work you’re registering - Either (a) upload a digital copy of your work (for certain categories of works only) or (b) print out a shipping slip to be attached to 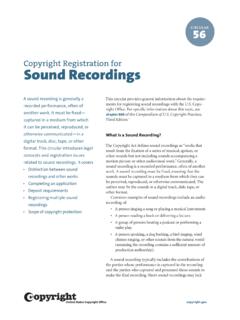 w copyright.gov CIRCLAR 56 This circular provides general information about the require-ments for registering sound recordings with the U.S. Copy- 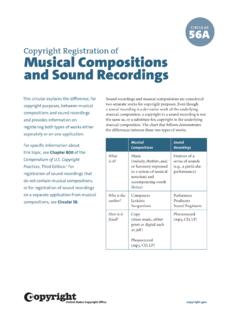 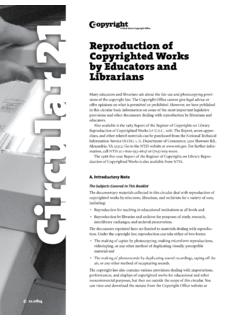 Reproduction of Copyrighted Works by Educators …

w Circular 21 2 21.0814 Reproduction of Copyrighted Works by Educators and Librarians Many educators and librarians ask about the fair use and photocopying provi- 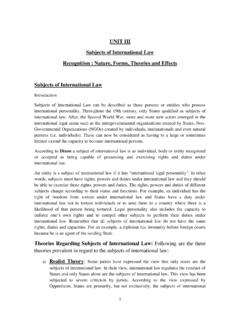 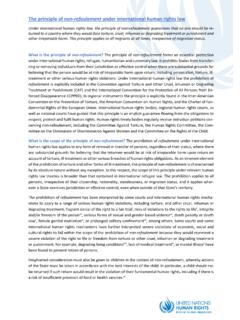 The principle of non-refoulement under international … 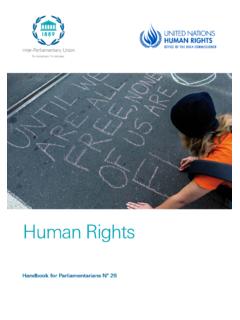 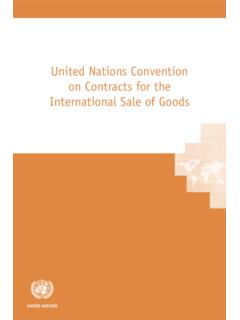 United Nations Convention on Contracts for the ...

the rights and obligations of the seller and the buyer arising from such a contract. In particular, except as otherwise expressly provided in this Convention, ... international character and to the need to promote uniformity in its application and the … 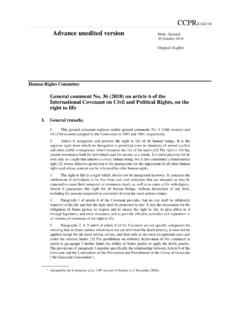 international law International law covers a number of conventions to which Australia is a signatory, such as the Convention on the Rights of the Child. Customary law Customary law is recognition that Aboriginal and Torres Strait Islander peoples have their own form of law. This notion was rejected by the British when they colonised

Refugees, adopted in 1951, is the centrepiece of international refugee protec-tion today. (1) The Convention entered into force on 22 April 1954, and it has been subject to only one amendment in the form of a 1967 Protocol, which removed the geographic and temporal limits of …