International Guidelines for Management of Severe …

3 Please refer to the Guidelines for additional information at The Surviving sepsis Campaign is a collaboration of the European Society of Intensive Care Medicine and the Society of Critical Care Medicine. @2013 Society of Critical Care Medicine, European Society of Intensive Care Medicine. r Strength of recommendation and quality of evidence psis have been assessed using GRADE criteria, presented in brackets after each guideline. For added clarity: Indicates a strong recommendation or we recommend.. we . I ndicates a weak recommendation or suggest.. UG means the evidence is ungraded. * Please refer to the Guidelines for further details on the grading of recommendations. Initial Resuscitation and Infection Issues Initial Resuscitation Protocolized, quantitative resuscitation of patients with sepsis - induced tissue hypoperfusion (defined in this document as hypotension persisting after initial fluid challenge or blood lactate concentration 4 mmol/L) (grade 1C). Goals during the first 6 hrs of resuscitation: a) Central venous pressure (CVP) 8 12 mm Hg b) Mean arterial pressure (MAP) 65 mm Hg c) Urine output mL/kg/hr d) Central venous (superior vena cava) or mixed venous oxygen saturation 70% or 65%, respectively to normalizewith.

4 I n patients elevated lactate levels targeting resuscitation lactate (grade 2C). Screening for sepsis and Performance Improvement Routine screening of potentially infected seriously ill patients for Severe sepsis to allow earlier implementation of therapy (grade 1C). Hospital based performance improvement efforts in Severe sepsis (UG). Diagnosis Cultures as clinically appropriate before antimicrobial therapy if no significant delay (> 45 mins) in the start of antimicrobial(s) (grade 1C). At least 2 sets of blood cultures (both aerobic and anaerobic bottles) be obtained before antimicrobial therapy with at least 1 drawn percutaneously and 1 drawn through each vascular access device, unless the device was recently (<48 hrs) inserted (grade 1C). anti-mannan . U se of the 1,3 beta-D-glucan assay (grade 2B), mannan and antibody assays (grade 2C), if available and invasive candidiasis is in differential diagnosis of cause of infection. Imaging studies performed promptly to confirm a potential source of infection (UG).

5 Antimicrobial Therapy Administration of effective intravenous antimicrobials within the first hour of recognition of septic shock (grade 1B) and Severe sepsis without septic shock (grade 1C) as the goal of therapy. a) Initial empiric anti-infective therapy of one or more drugs that have activity against all likely pathogens (bacterial and/or fungal or viral) and that penetrate in adequate concentrations into tissues presumed to be the source of sepsis (grade 1B). b) A ntimicrobial regimen should be reassessed daily for potential de-escalation (grade 1B). the clinician U se of low procalcitonin levels or similar biomarkers to assist in the discontinuation of empiric antibiotics in patients who initially appeared septic, but have no subsequent evidence of infection (grade 2C). Cwith a) ombination empirical therapy for neutropenic patients Severe sepsis (grade 2B) and for patients with difficult-to-treat, multidrug-resistant bacterial pathogens such as Acinetobacter and Pseudomonas spp.

6 (grade 2B). For patients with Severe infections associated with respiratory failure and septic shock, combination therapy with an extended spectrum beta-lactam and either an Hem aminoglycoside or a fluoroquinolone is for P. aeruginosa bacteremia (grade 2B). A combination of beta-lactam and macrolide for patients with septic shock from bacteremic Streptococcus pneumoniae infections (grade 2B). b) for Empiric combination therapy should not be administered more than 3 5 days. De-escalation to the most appropriate single therapy should be performed as soon as the susceptibility profile is known (grade 2B). Dbeuration of therapy typically 7 10 days; longer courses may appropriate in patients who have a slow clinical response, undrainable foci of infection, bacteremia with S. aureus;. some fungal and viral infections or immunologic deficiencies, including neutropenia (grade 2C). Severe A ntiviral therapy initiated as early as possible in patients with sepsis or septic shock of viral origin (grade 2C).

7 Antimicrobial agents should not be used in patients with Severe inflammatory states determined to be of noninfectious cause (UG). Source Control A specific anatomical diagnosis of infection requiring consideration for emergent source control be sought and diagnosed or excluded as rapidly as possible, and intervention be undertaken for source control within the first 12 hr after the diagnosis is made, if feasible (grade 1C). potential . W hen infected peripancreatic necrosis is identified as a source of infection, definitive intervention is best delayed until adequate demarcation of viable and nonviable tissues has occurred (grade 2B). When source control in a severely septic patient is required, the effective intervention associated with the least physiologic insult should be used (eg, percutaneous rather than surgical drainage of an abscess) (UG). If intravascular access devices are a possible source of Severe sepsis or septic shock, they should be removed promptly after other vascular access has been established (UG).

8 Infection Prevention a) Sdecontamination elective oral decontamination and selective digestive should be introduced and investigated as a method to reduce the incidence of ventilator-associated pneumonia; this infection control measure can then be instituted in health care settings and regions where this methodology is found to be effective (grade 2B). oropharyngeal . b ) Oral chlorhexidine gluconate be used as a form of decontamination to reduce the risk of ventilator-associated pneumonia in ICU patients with Severe sepsis (grade 2B). Hemodynamic Support and Adjunctive Therapy Fluid Therapy of Severe sepsis Crystalloids as the initial fluid of choice in the resuscitation of Severe sepsis and septic shock (grade 1B). Against the use of hydroxyethyl starches for fluid resuscitation of Severe sepsis and septic shock (grade 1B). septic . Albumin in the fluid resuscitation of Severe sepsis and shock when patients require substantial amounts of crystalloids (grade 2C). Initial fluid challenge in patients with sepsis -induced tissue hypoperfusion with suspicion of hypovolemia to achieve a minimum of 30 mL/kg of crystalloids (a portion of this may be albumin equivalent).

9 More rapid administration and greater amounts of fluid may be needed in some patients (grade 1C). Fluid challenge technique be applied wherein fluid administration is continued as long as there is hemodynamic improvement either based on dynamic (eg, change in pulse pressure, stroke volume variation) or static (eg, arterial pressure, heart rate) variables (UG). Vasopressors Vasopressor therapy initially to target a mean arterial pressure (MAP) of 65 mm Hg (grade 1C). Norepinephrine as the first choice vasopressor (grade 1B). norepinephrine). Epinephrine (added to and potentially substituted for when an additional agent is needed to maintain adequate blood pressure (grade 2B). Vasopressin units/minute can be added to norepinephrine (NE) with intent of either raising MAP or decreasing NE dosage (UG). Low dose vasopressin is not recommended as the single initial vasopressor for treatment of sepsis -induced hypotension and vasopressin doses higher than units/minute should be reserved for salvage therapy (failure to achieve adequate MAP with other vasopressor agents) (UG).

10 Norepinephrine Dopamine as an alternative vasopressor agent to only in highly selected patients (eg, patients with low risk of tachyarrhythmias and absolute or relative bradycardia) (grade 2C). Phenylephrine is not recommended in the treatment of septic shock except in circumstances where (a) norepinephrine is associated with serious arrhythmias, (b) cardiac output is known to be high and blood pressure persistently low or (c) as salvage therapy when combined inotrope/vasopressor drugs and low dose vasopressin have failed to achieve MAP. target (grade 1C). Low dose dopamine should not be used for renal protection (grade 1A). All patients requiring vasopressors have an arterial catheter placed as soon as practical if resources are available (UG). Inotropic Therapy A trial of dobutamine infusion up to 20 micrograms/kg/min be administered or added to vasopressor (if in use) in the presence of (a) myocardial dysfunction as suggested by elevated cardiac filling pressures and low cardiac output, or (b) ongoing signs of hypoperfusion, despite achieving adequate intravascular volume and adequate MAP (grade 1C). 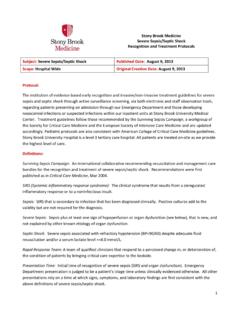 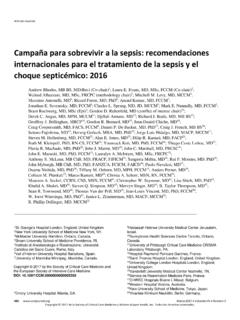 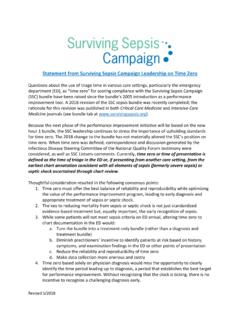 Revised 5/2018 Statement from Surviving Sepsis Campaign Leadership on Time Zero Questions about the use of triage time in various care settings, particularly the emergency 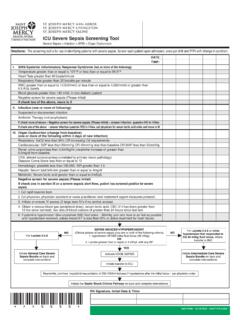 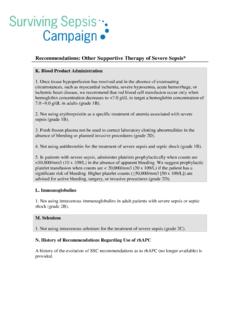 Recommendations: Other Suppo rtive Therapy of …

Recommendations: Other Suppo rtive Therapy of Severe Sepsis* K. Blood Product Administration 1. Once tissue hypoperfusion has resolved and in … 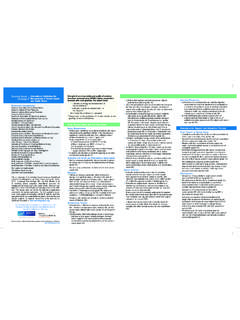 °b) Oral chlorhexidine gluconate be used as a form of

Other Supportive Therapy of Severe Sepsis blood product adminiStration • Once tissue hypoperfusion has resolved and in the babsence of extenuating circumstances, such as myocardial ischemia, 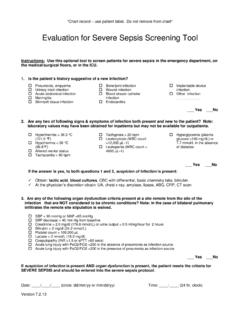 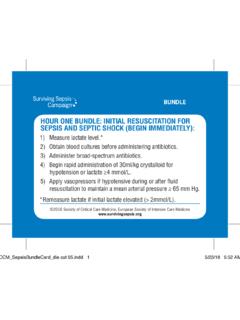 HOUR ONE BUNDLE: INITIAL RESUSCITATION FOR … 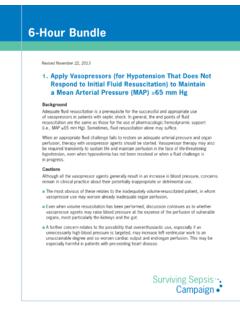 NNF Teaching Aids:Newborn Care Neonatal sepsis Slide NS -1 Definition Neonatal sepsis is defined as a clinical syndrome of bacteremia with systemic signs and symptoms of infection in the first 4 weeks of life. 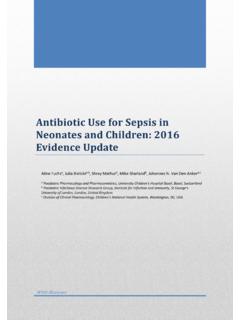 Antibiotic Use for Sepsis in Neonates and Children: … 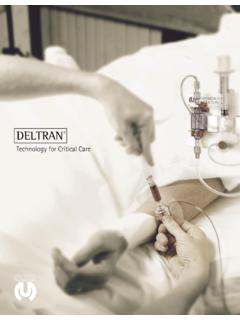 Neonatal Drug Doses 2016 This information about drug dosage, route and administration frequency should not be used without careful consideration of the characteristic of the individual case by the veterinary clinician.