INVOLUNTARY treatment : HOSPITALIZATION AND MEDICATIONS. John A. Menninger 1. Why is INVOLUNTARY HOSPITALIZATION necessary? provides for the protection of the individual, police power generally is invoked on behalf of society against the individual. Although the number of INVOLUNTARY hospitalizations relative to total psychiatric admissions has decreased considerably in the United States from 90% in 1949 to 55% in 1980, civil 3. Who can be involuntarily hospitalized? commitment of the mentally ill remains a frequent route for inpatient treatment . A majority of persons suffering from The legal standards specifying the criteria for civil severe mental illness show limited insight into their illness. commitment vary widely from state to state, and may have Schizophrenic patients, in particular, may show no changed in some states since the publication of this book. recognition that they have a mental illness or need treatment . The clinician must be aware of the specific criteria for his or Depressed patients who are unable to envision hope or recall her own state.

1 INVOLUNTARY treatment : HOSPITALIZATION AND MEDICATIONS. John A. Menninger 1. Why is INVOLUNTARY HOSPITALIZATION necessary? provides for the protection of the individual, police power generally is invoked on behalf of society against the individual. Although the number of INVOLUNTARY hospitalizations relative to total psychiatric admissions has decreased considerably in the United States from 90% in 1949 to 55% in 1980, civil 3. Who can be involuntarily hospitalized? commitment of the mentally ill remains a frequent route for inpatient treatment . A majority of persons suffering from The legal standards specifying the criteria for civil severe mental illness show limited insight into their illness. commitment vary widely from state to state, and may have Schizophrenic patients, in particular, may show no changed in some states since the publication of this book. recognition that they have a mental illness or need treatment . The clinician must be aware of the specific criteria for his or Depressed patients who are unable to envision hope or recall her own state.

2 The presence of a mental illness is a a better time may be suicidal and unwilling to seek treatment . prerequisite for civil commitment. Other criteria frequently Manic individuals who have become markedly grandiose and include dangerous behavior toward self or others, grave deny that they have any kind of problem or illness that needs disability, and the need for treatment . Over the past three treatment may display behaviors that put themselves or decades there has been a general shift among most states others in danger. Other patients may recognize their from standards based on the individual's need for treatment symptoms as part of an illness, but disagree with and refuse to standards that require the person to be considered recommended treatment . dangerous to self or others. However, some states have recently modified their statutes to allow for INVOLUNTARY Untreated depression, mania, and psychosis can have HOSPITALIZATION of persons who are in need of treatment but devastating effects on both the affected individual and those are not imminently dangerous to themselves or others.

3 Around him or her: suicide, assaults on others, inadvertent tragedies stemming from delusional thinking, financial and Less common criteria used by some states include: the social ruin, and inability to adequately care for one's own responsiveness of the mental illness to treatment and the needs. Because insight often is lacking, civil commitment availability of appropriate treatment at the facility to which may be initiated by others who witness or are the brunt of the patient will be committed; refusal of voluntary admission;. concerning behavior, whether they be family members, lack of a capacity to consent to or refuse psychiatric police, or mental health providers. treatment or HOSPITALIZATION ; future danger to property; and INVOLUNTARY HOSPITALIZATION as the least restrictive alternative. 2. What is the legal basis for INVOLUNTARY commitment? 4. What disorders does the term mentally ill include? The state's authority to commit individuals stems from two legal theories; parens patriae and the police power of the The legal definition of the term mental health, as spelled out state.

4 In each state's statutes, varies considerably. Except for Utah, the statutes do not include specific psychiatric diagnoses, but Parens patriae, which literally means parent of the instead define mental illness in terms of its effects on the country, provides the sovereign power with authority to individual's thinking or behavior. Some definitions are rather protect citizens who, for reasons of mental or physical vague; for example, in the District of Columbia mental disability or because they are unsupervised minors, cannot illness means a psychosis or other disease which adequately protect or care for themselves. Intervention by the substantially impairs the mental health of a person. Most state is indicated for individuals who are deemed unable to definitions include some deleterious effect of the illness. For make rational decisions for themselves, including the example, in Georgia mentally ill shall mean having a mentally ill who are gravely disabled or suicidal.

5 The state disorder of thought or mood which significantly impairs the also is obligated to make the decision that is in the best judgment, behavior, capacity to recognize reality, or ability to interest of the individual and most clearly reflects the choice cope with the ordinary demands of life. Some definitions are that the individual would have made if he or she were qualified by a reference to the need for treatment . Hawaii's competent to do so. statute specifies that a mentally ill person has psychiatric disorder or other disease which substantially impairs the person's mental health and necessitates treatment or The legal theory police power provides the state with the supervision. Many definitions include aspects of authority to act for the protection of society and the general dangerousness. Oregon's statute declares that a mentally ill welfare of its citizens. In the process of such protection, person is a person who, because of a mental disorder, is isolation and confinement of dangerous individuals may be either (a) dangerous to himself or others; or (b) unable to necessary.

6 Not only the criminal element and persons with provide for his basic personal needs and is not receiving such highly contagious diseases may be detained, but also the care as is necessary for his health or safety.. mentally ill who are a risk to others. Whereas parens patriae 2. 5. Is someone with a developmental disability considered The specifics of which professionals or persons may initiate mentally ill? civil commitment vary among states, and usually within a state depending on the type of commitment sought ( , emergency detention or extended commitment). In general, Although developmental disability (mental retardation) is the application for emergency detention is less formal and described in the Diagnostic and Statistical Manual of Mental extended commitment more formal; observational Disorders, 4th ed. (DSM-IV), it typically is not considered a commitment (where available) is somewhere between. mental illness for the purposes of civil commitment.

7 Many statutes completely exclude mental retardation from their definition of mentally ill, whereas others note that such a Emergency detention generally may be initiated by another disorder may not constitute mental illness but does not adult, usually a family member or friend who has witnessed preclude a comorbid mental illness. A few statutes the person's deterioration and dangerous behavior. The specifically include mental retardation per se. police also frequently initiate the process, although some states require judicial approval before the person can be detained. A number of states provide for medical 6. Are other diagnoses excluded in the definition of certification; that is, an evaluation from a physician stating mentally ill? that the person meets the statutory criterion is adequate to proceed with HOSPITALIZATION . In a few state statutes, the definition of mentally ill specifically excludes other disorders, most commonly Application for observational commitment often may be alcoholism, drug addiction, and epilepsy.

8 Some exclude made by any citizen with good reason, although some states simple intoxication with either alcohol or drugs. A small limit the application to physicians or hospital personnel. Most number exclude sociopathy, severe personality disorders in states require court approval. general, senility, and organic brain syndrome. Some statutes specifically include alcoholism and drug addiction. Maine's statute includes persons suffering from the effects of the use The procedure to request extended commitment is the most of drugs, narcotics, hallucinogens or intoxicants, including formal and usually more detailed than the applications for alcohol, but not including mentally retarded or sociopathic other forms of commitment. In general, one or more of a persons. specific group of people may complete the appropriate forms to request INVOLUNTARY treatment . Although this group may include spouses, relatives, friends, guardians, and public 7. What is grave disability?

9 Officials, it typically is limited to physicians, hospital superintendents, and other mental health professionals, such The exact definition of grave disability varies from state to as certain licensed social workers and nurses. Even in states state. In general, the term refers to an inability to care that allow for other persons to initiate commitment, generally adequately for one's own needs. In some states, a person is only a physician can extend commitment beyond the initial gravely disabled if he or she cannot care for basic needs period. Often the application must be accompanied by a without the assistance of others, even if family or friend are certificate or affidavit from a physician in which the person's currently providing such care. In other states, the person must psychiatric presentation, pertinent history, recent behavior be without basic needs of food, clothing, shelter, or essential warranting commitment, initial diagnosis, and medical care.

10 Recommendations for treatment are described in detail. Some states require statements from two physicians or an additional statement from a psychologist, mental health board or similar 8. What are the differences between emergency detention, designee. In virtually all states extended commitment is a observational institutionalization, and extended judicial process. A hearing is scheduled, and either a judge or commitment? a jury decides whether to uphold the request. Each has a specific purpose, although there often is 10. How long does INVOLUNTARY HOSPITALIZATION last? considerable overlap. All states provide for some form of emergency detention, in which the intent is immediate psychiatric intervention to treat what is currently, or soon to Emergency detention is designed to provide for become, an emergency situation. Emergency detention an assessment of a dangerous situation. It is allows for an initial psychiatric assessment and at least generally limited to a brief period, usually 3 5. 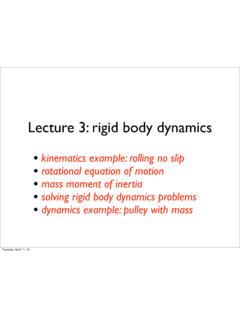 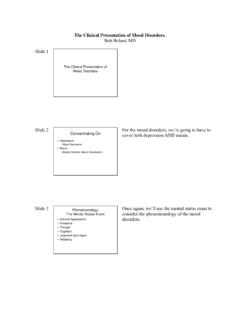 The Clinical Presentation of Mood Disorders. Bob Boland MD Slide 1 The Clinical Presentation of Mood Disorders Slide 2 Concentrating On • Depression – Major Depression ... extreme, they describe feeling as if they are demented. Typically, they see thinks as worse that it really is, and in the extreme, they may become delusional. 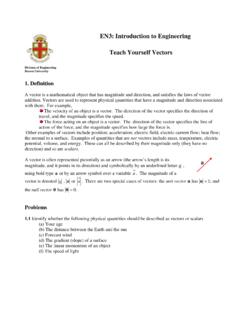 EN3: Introduction to Engineering Teach Yourself Vectors Division of Engineering Brown University 1. Definition A vector is a mathematical object that has magnitude and direction, and satisfies the laws of … 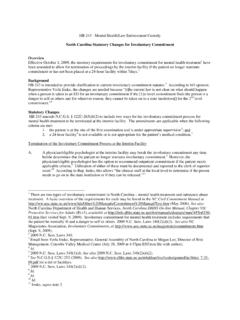 HB 243 - Mental Health/Law Enforcement Custody North Carolina Statutory Changes for Involuntary Commitment Overview Effective October 1, 2009, the statutory requirements for involuntary commitment for mental health treatment 1 have been amended to allow for termination of proceedings by the interim facility if the patient no … 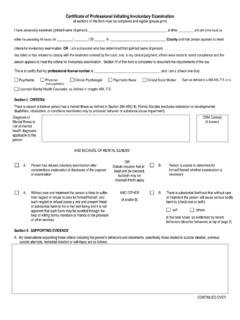 Certificate of Professional Initiating Involuntary Examination (Page 2) Section III: OTHER INFORMATION Other information, including source relied upon to reach this co nclusion is as follows. 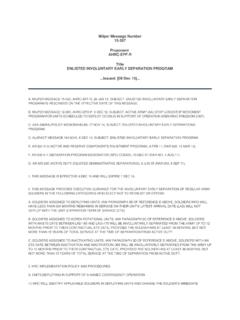 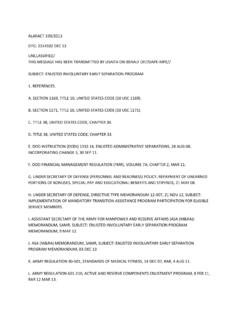