JACKED BOX TUNNELLING Using the Ropkins SystemTM, a non-intrusive TUNNELLING technique for constructing new underbridges beneath existing traffic arteries DR DOUGLAS ALLENBY, Chief TUNNELLING Engineer, Edmund Nuttall Limited JOHN W T ROPKINS, Managing Director, John Ropkins Limited Lecture presented at the Institution of Mechanical Engineers Held at 1 Birdcage Walk, London On Wednesday 17 October 2007 Institution of Mechanical Engineers 2007 This publication is copyright under the Berne Convention and the International Copyright Convention. All rights reserved. Apart from any fair dealing for the purpose of private study, research, criticism or review, as permitted under the Copyright, Designs and Patent Act, 1988, no part of this publication may be reproduced, stored in a retrieval system or transmitted in any form or by any means without the prior permission of the copyright owners.

1 JACKED BOX TUNNELLING Using the Ropkins SystemTM, a non-intrusive TUNNELLING technique for constructing new underbridges beneath existing traffic arteries DR DOUGLAS ALLENBY, Chief TUNNELLING Engineer, Edmund Nuttall Limited JOHN W T ROPKINS, Managing Director, John Ropkins Limited Lecture presented at the Institution of Mechanical Engineers Held at 1 Birdcage Walk, London On Wednesday 17 October 2007 Institution of Mechanical Engineers 2007 This publication is copyright under the Berne Convention and the International Copyright Convention. All rights reserved. Apart from any fair dealing for the purpose of private study, research, criticism or review, as permitted under the Copyright, Designs and Patent Act, 1988, no part of this publication may be reproduced, stored in a retrieval system or transmitted in any form or by any means without the prior permission of the copyright owners.

3 The paper outlines a TUNNELLING system designed to install large open ended rectangular reinforced concrete box structures at shallow depth beneath existing railway and highway infrastructure. The system provides measures to control ground movements around the advancing box so that movements of overlying and adjacent infrastructure are minimised and maintained within acceptable limits. Application of the technique to three projects in the UK is described at Silver Street railway station, Edmonton, London, under the London to Bristol railway at Dorney, Berkshire, and under the M1 Motorway at Junction 15A, Northampton. The influence of site specific conditions and hazards on the design of the TUNNELLING system adopted is noted together with the performance achieved in practice.

4 Consideration is given to the manner in which the Ropkins SystemTM should be selected, developed and executed. The importance of a comprehensive investigation of the ground conditions and infrastructure at the site of the works is stressed together with the need for a client to engage the services of a specialist engineer and specialist contractor experienced in the Ropkins SystemTM. Key words: Ropkins SystemTM; JACKED box TUNNELLING ; TUNNELLING ; underbridges; infrastructure; geotechnical 1. INTRODUCTION TO THE TUNNELLING TECHNIQUE Figure 1 illustrates the first underbridge installed under a live motorway in the UK at Junction 15A of the M1 Motorway. The underbridge measures 14m wide, high by 45m long and was cast as an open ended monolithic reinforced concrete box on a jacking based constructed adjacent to the motorway embankment as illustrated in Figure 2(a).

5 A purpose designed cellular tunnel shield was provided at its leading end with thrust jacks mounted at its trailing end reacting against the jacking base. Internal equipment included face excavation and spoil handling equipment, ventilation fans and ducting, essential services and rear access for personnel. Top and bottom proprietary anti-drag systems were installed to minimise both ground drag and friction developed on the extrados/ground interface during box installation; these are described in Section 2. The box was then JACKED to the embankment and entered through the headwall into the ground using a carefully controlled and phased sequence. TUNNELLING commenced by carefully excavating 150mm off the face and jacking the box forward a corresponding increment, this sequence being repeated many times [Figure 2(b)].

6 On the exit side of the embankment a temporary berm was constructed to buttress the embankment during the final stages of jacking. When the shield had reached its final position [Figure 2(c)] the shield and all internal and jacking equipment were dismantled and removed, the box extrados/ground interface grouted, portal wing walls, parapets and roadway constructed, internal services installed and the underbridge opened to traffic [Figure 2(d)]. The technique is suitable for use in many types of ground, both natural and made ground, where face stability can be controlled using open faced shield TUNNELLING methods. On some projects ground conditions have been improved by geotechnical processes such as dewatering, grouting or artificial ground freezing in order to render them suitable for JACKED box TUNNELLING [Table 1].

7 In all cases a comprehensive, site specific, site investigation and archive survey is essential to identify the ground types, their strength and stability characteristics, and the ground water regime. Surveys of overlying infrastructure are essential to establish infrastructure type, form, structural integrity and ability to withstand displacements. Using this information the specialist engineer will design a fully integrated TUNNELLING system comprising tunnel shield and excavation method, spoil handling, jacking system, anti-drag systems and jacking base together with the embankment headwall entry and exit procedures. Risk assessments form an essential part of this process. 2. GEOTECHNICAL INTERFACES AND GROUND CONTROL MEASURES The principal geotechnical interfaces which have to be addressed during the system design are[1]: - the tunnel face the box extrados/ground interface the jacking base/ground interface Careful consideration must be given to the method of constructing the jacking base, shield and box, and the allowable construction tolerances and surface finishes.

8 The Tunnel Face Face excavation causes three- dimensional stress redistribution in, ahead of, and around the advancing face accompanied by ground relaxation which results in surface settlement. As the box advances a shallow settlement trough develops along the box alignment whose magnitude and extent are dependent upon the physical properties of the ground, box dimensions, depth of cover, rate of box advance and, most importantly, the support or buttressing characteristics of the tunnel shield. Each shield is purpose designed to suit the ground conditions predicted from the site investigation and to provide the face support necessary to maintain the integrity of overlying infrastructure. Shield structural components comprise the extrados body with peripheral cutting edges, intermediate stiffening/working decks and dividing walls.

9 Face rams, gun struts, etc. are commonly installed to provide additional face support particularly during headwall entry procedures. Decks and walls give the shield a robust cellular configuration. Cell width and height are determined from the ability of the ground to span and the buttressing force is developed by the thrust jacks reacting against the jacking base and transmitted through the box and shield into the face. The buttressing force has to be carefully calculated and controlled to prevent distress to the shield s cutting edges and ground heave ahead of the face. Face excavation can be either by hand or machine, or a combination of each and is determined from a study of the ground, sensitivity of adjacent and overlying infrastructure and contractor s preference.

10 For example, Figure 3(a) illustrates a composite steel and reinforced concrete shield for a 17m wide by high rail tunnel installed with of cover to the railway tracks at Lewisham railway station, London. The shield was designed for a mixed face comprising loose silt and sand in the top half and soft clay in the bottom half. The steel section had a sloping face and hood section designed to be thrust into the loose silt and sand to provide face and roof support and protection to the miners. The lower concrete section, with its relatively thick walls, was designed to support the soft clay. Each top compartment was hand mined and 360o excavators positioned on the box floor excavated the remaining face area [Figures 3(b) and 3(c)] The Box and Shield Extrados/Ground Interface During conventional pipe jacking[2; 3] instantaneous stress redistribution takes place around the shield resulting in the development of soil arching around the advancing pipeline. 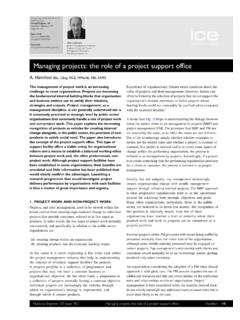 Managing projects: the role of a project support …

Managing projects: the role of a project support ofﬁce A. Hamilton BSc, CEng, FICE, FIMechE, FIEI, FAPM The management of project work is an increasing challenge to most organisations.

Nickel-Aluminium Bronze for Seawater: Flattered by …

About the Author J R C (Ron) Strang (Eur. Ing,. BSc, CEng, FIMechE, MBA), graduated as a Mechanical Engineer from Aston University in 1981 and from Hull

History of the Industrial Gas Turbine Part 1 The First ...