AgBioForum Volume 3, Number 4 2000 Pages 192-196. THE CODEX ALIMENTARIUS COMMISSION: INTERNATIONAL SCIENCE-BASED. STANDARDS, GUIDELINES AND RECOMMENDATIONS. John R. Lupien1. This paper provides background to the Codex Alimentarius Commission, its activities, and current Codex considerations. It argues that food standards work, and the control of food quality and safety must be based on the best available scientific information to assure a constant supply of good quality and safe food to all. Key words: Codex Alimentarius Commission; science-based standards; Food and Agriculture Organization (FAO); World Health Organization (WHO); General Agreement on Tariffs and Trade (ATT); food standards During the 1950s and early 1960s member nations to the United Nations Food and Agriculture Organization (FAO) and the World Health Organization (WHO) held extensive discussions about international mechanisms to assist all member countries to improve the quality and safety of domestic food supplies, and of foods in international commerce.

1 AgBioForum Volume 3, Number 4 2000 Pages 192-196. THE CODEX ALIMENTARIUS COMMISSION: INTERNATIONAL SCIENCE-BASED. STANDARDS, GUIDELINES AND RECOMMENDATIONS. John R. Lupien1. This paper provides background to the Codex Alimentarius Commission, its activities, and current Codex considerations. It argues that food standards work, and the control of food quality and safety must be based on the best available scientific information to assure a constant supply of good quality and safe food to all. Key words: Codex Alimentarius Commission; science-based standards; Food and Agriculture Organization (FAO); World Health Organization (WHO); General Agreement on Tariffs and Trade (ATT); food standards During the 1950s and early 1960s member nations to the United Nations Food and Agriculture Organization (FAO) and the World Health Organization (WHO) held extensive discussions about international mechanisms to assist all member countries to improve the quality and safety of domestic food supplies, and of foods in international commerce.

2 These discussions were based on concerns related to increasing international food trade following the Second World War. Concerns included the increased use of food additives to preserve foods, new pesticide compounds which were being used in agriculture and food storage, differing food standards in various countries affecting basic food composition and nutritional value, and basic problems such as accurate labeling, promoting good food hygiene to reduce or eliminate contamination of foods with insects, rodent and bird filth, and pathogenic microorganisms. Origins And Antecedents Of The Codex Alimentarius Commission Much of the agenda of FAO and WHO related to food standards, food quality, and safety was laid down in a landmark conference organized at Hot Springs, Virginia in May-June 1943 (United Nations Food and Agriculture Organization [FAO], 1943). The 1943 Conference was convened by President Franklin D. Roosevelt to address problems of food and agriculture that had been greatly exacerbated by the war, and were likely to continue after the end of the war.

3 The Final Act of this Conference (FAO, 1943) pointed out the need for more food and better economic access to it to prevent widespread problems of malnutrition which existed then, and which continue to exist in many countries today. It made wide ranging recommendations, among other things, on nutrition and standards for the basic composition of foods, and for containers, additives, pesticides, fertilizers and other materials used in food production. It also urged governments to take steps to ensure that producers and consumers are adequately protected against trade malpractices and against exploitation in the purchase and sale of food. (p. 37). _____. 1. John R. Lupien is a Professor of Food Science at the University of Massachusetts at Amherst, Massachusetts, and Former Secretary to the FAO/WHO Codex Alimentarius Commission. AgBioForum 2000. Lupien The Codex Alimentarius Commission: Standards, Guidelines, & Recommendations The 1943 Conference created an Interim Commission to carry out conference recommendations, and this led on October 16, 1945 to the creation of the Food and Agriculture Organization of the United Nations.

4 The FAO, in fact, preceded the creation of the United Nations General Assembly by one month, and the World Health Organization by several years. In their early years, FAO and WHO concentrated on general problems of food production and malnutrition, but in the 1950s initiated joint FAO/WHO. discussions and activities on food standards, additives, and other aspects of food quality and safety. These discussions by FAO and WHO member countries emphasized the need for international scientific evaluation mechanisms that could provide the best possible science-based advice to member countries, with periodic updating to assure that new scientific information was always taken into account in FAO/WHO recommendations. Following an FAO/WHO Conference of Food Additives in the mid-1950s the Joint FAO/WHO Expert Committee of Food Additives (JECFA) was established (FAO, 1957). The purpose of JECFA was to utilize the services of internationally recognized scientists serving in their individual capacities in expert meetings to evaluate available data on food additives, animal drug residues in foods, and other food contaminants such as, mycotoxins, heavy metals, and industrial chemicals.

5 The recommendations of JECFA on specifications and test methods for these compounds, acceptable daily intakes for additives or animal drug residues, and tolerable weekly intakes for contaminants, have for many years been of great value to developed and developing countries in setting science-based national rules for such compounds. The work of JECFA has continued unabated over the past 45 years, and continues to be a mainstay to member countries and to the Codex Alimentarius Commission (Codex). In the 1960s, FAO and WHO carried out similar discussions about the use of pesticides in agriculture and health programs, and on pesticide residues in foods. Another expert assessment body was created; the Joint FAO/WHO Meeting on Pesticide Residues (JMPR), which is a joint meeting of the FAO Panel of Experts on Pesticide Residues in Foods and the Environment and the WHO Core Assessment Group. As with JECFA, the recommendations of JMPR on the use of pesticides in agriculture and public health programs; on residues in foods; specification and test methods for pesticides and their residues; and for acceptable daily intake levels for various pesticides, have been invaluable to member countries, and to Codex, in setting science-based recommendations for pesticide residues in foods.

6 The FAO/WHO Codex Alimentarius Commission In 1962, FAO and WHO decided at the FAO Conference1 and the WHO World Health Assembly to create the Joint FAO/WHO Food Standards Programme Secretariat to serve as the Secretariat to the newly created FAO/WHO Codex Alimentarius Commission (Codex). Unlike JECFA and JMPR, which were bodies of individual experts serving in their own individual capacity to provide FAO, WHO, and their member countries with recommendations based on current scientific data, Codex was created as an international commission. This means that members of Codex are governments, and participate in Codex activities representing their own national interests. The Statutes of Codex set the purposes of Codex as follows, To protect the health of consumers and ensure fair practice in food trade. To promote coordination of all food standards work undertaken by international governmental and non-governmental organizations (NGOs). To prioritize, initiate, and prepare draft standards, finalize these standards, amend standards when necessary, and publish final recommended international standards.

7 In practice, over the past 40 years Codex has served as a very effective mechanism for obtaining consensus among Codex member countries on a wide range of food standards for individual food products, food labeling, recommendations on pesticide residue food additive and food contaminant Lupien The Codex Alimentarius Commission: Standards, Guidelines, & Recommendations levels, codes of hygienic practice, and other recommendations. Membership of Codex has grown from about 45 countries in 1962 to 165 countries at present. In carrying out Codex work, the Commission has established a number of committees to work on general and specific aspects of Codex work. These committees are generally referred to as vertical committees when they are set up to deal with commodity standards (milk and milk products, processed fruits and vegetables, cereals, pulses and legumes, and so on) or horizontal committees which deal with matters such as food labeling, food hygiene, pesticide residues, food additives and contaminants, Codex general principles, and so on.

8 There are also Codex Regional Coordinating Committees that discuss regional food standards issues, and work towards more effective utilization of Codex work in developing and developed countries. A guiding principle for Codex since its establishment has been to base its work on the best possible scientific advice. For this reason, the work carried out by JECFA, JMPR, and ad hoc FAO/WHO expert consultations have been invaluable inputs into Codex discussions. Without adequate science-based inputs into Codex work it would be difficult, if not impossible, to reach consensus on many Codex issues. The FAO and WHO have organized several international conferences of member countries to review Codex and related work from time to time. The most recent of these conferences was held in Melbourne, Australia in October 1999 (FAO, 1999), and reviewed and endorsed ongoing science-based Codex, JECFA, and JMPR work. It also strongly supported Codex work with the WTO to provide all member countries, especially developing countries, with equal opportunities to compete in international trade of good quality and safe foods.

9 Most developing countries rely on the agricultural industry for overall development. Codex work provides a basis for national regulations that improve the quality and safety of domestic and imported foods, and promotes export trade possibilities. At present many developing countries have problems in international trade because of poor food hygiene, pesticide residues in export crops, microbial contamination, and food labeling. Codex work helps to resolve some of these problems, especially when FAO or other technical assistance is given to strengthen government and industry food control activities. There are a wide range of FAO food control guidance documents and expert reports which are used by all countries in setting up improved food control systems. These can be found on the FAO website (FAO, 2001). Codex member countries have understood from the outset that effective implementation of food legislation requires science-based systems to assure the best consumer protection and to enable clear justification of actions taken to courts, policy makers, and to consumers.

10 It is clear that all matters related to the control of quality or safety of foods, such as net weight, volume, ingredient lists, claims, additives, pesticide or animal drug residues, control of contaminants or food hygiene, must be based on good science. A recent problem that has arisen in Codex work relates to new foods and food ingredients derived from new techniques such as cloning and genetic engineering. National and international evaluation of genetically modified foods, have shown that they are not significantly different from other more traditional foods. Despite the reassurance from the United States Food and Drug Administration (US. FDA) and other national or international bodies, such as FAO/WHO expert consultations, that genetically modified foods are safe, and present no more problems to consumers than other foods on the market, pressure continues from some groups to require specific labeling of genetically modified foods and ingredients. Based on the best available science this is not justified. 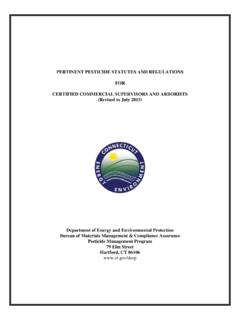 PERTINENT PESTICIDE STATUTES AND REGULATIONS . FOR . CERTIFIED COMMERCIAL SUPERVISORS AND ARBORISTS (Revised to July 2015) Department of Energy and Environmental Protection

C iii onecticut Office of Early Chil dho Family Child Care Homes Licensing Statutes and Regulations property, and (4) the date or proposed date of the application. A copy of the record of each pesticide application at a child care 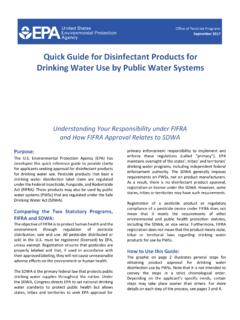 disinfection FIFRA: F-1) Applicants should first determine whether the product is a pesticide or device. Unless exempt, pesticide products and devices that make antimicrobial claims of efficacy are subject to 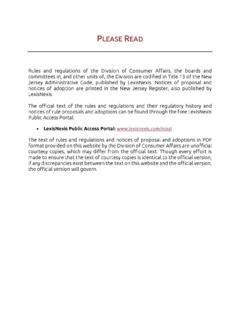 PLEASE READ Rules and regulations of the Division of Consumer Affairs, the boards and committees in, and other units of, the Division are codified in Title 13 of the New 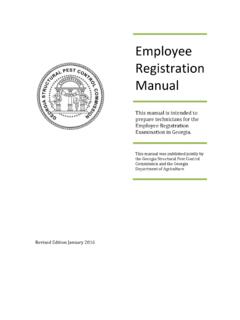 Regulations Governing The Sanitation And Safety …

- i - SOUTHERN NEVADA HEALTH DISTRICT REGULATIONS GOVERNING THE SANITATION AND SAFETY OF PUBLIC ACCOMMODATION FACILITIES WHEREAS, the Southern Nevada Health District has been established by the County of