3 F = applied force t = elapsed time Work, Energy, and Power W = work F = force Work is done when a force W = F d cos . d = distance is applied to an object as it or moves a distance d. Fk is the = angle between F. W = Fk d component of F in the direc- and the direction tion that the object is moved. of motion Fk = parallel force KE = kinetic energy The definition of kinetic en- 1. KE = mv 2 m = mass ergy for a mass m with veloc- 2. v = velocity ity v. PE = potential energy m = mass The potential energy for a PE = mgh g = acceleration due mass m at a height h above to gravity some reference level. h = height pg. 3. SAT Subject Physics Formula Reference Work, Energy, Power (continued). The work-energy theorem: W = work done the work done by the net force W = (KE). KE = kinetic energy on an object equals the change in kinetic energy of the object. E = total energy The definition of total ( me- chanical ) energy.

7 (q is sometimes called a test . q = charge charge, since it tests the elec- tric field strength). E = electric field This formula gives the elec- k = a constant tric field due to a charge q at q a distance r from the charge. E=k q = charge r2 Unlike the test charge, the r = distance of charge q here is actually gen- separation erating the electric field. pg. 7. SAT Subject Physics Formula Reference Electric Fields and Forces (continued). This formula gives the elec- UE = electric PE. tric potential energy for two k = a constant charges a distance r apart. q1 q2. UE = k q1 , q2 = charges For more than one pair of r r = distance of charges, use this formula for separation each pair, then add all the UE 's. The potential difference V. between two points is defined V = potential difference as the negative of the work done by the electric field per WE UE WE = work done by E field V = = unit charge as charge q moves q q UE = electric PE from one point to the other.

8 Q = charge Alternately, it is the change in electric potential energy per unit charge. V = electric potential This formula gives the electric potential due to a charge q at q k = a constant V =k a distance r from the charge. r q = charge For more than one charge, use r = distance of this formula for each charge, separation then add all the V 's. Between two large plates of metal separated by a distance E = electric field V d which are connected to a E= V = voltage battery of voltage V , a uni- d d = distance form electric field between the plates is set up, as given by this formula. Circuits Ohm's Law . This law gives V = voltage the relationship between the V = IR I = current battery voltage V , the current R = resistance I, and the resistance R in a circuit. pg. 8. SAT Subject Physics Formula Reference Circuits (continued). P = IV. P = power All of these power formulas or I = current are equivalent and give the P = V 2 /R power used in a circuit resistor V = voltage or R.

9 Use the formula that has R = resistance the quantities that you know. P = I 2R. Rs = total (series) When resistors are placed end resistance to end, which is called in se- Rs =. R1 = first resistor ries , the effective total resis- R1 + R2 + .. R2 = second resistor tance is just the sum of the in- .. dividual resistances. Rp = total (parallel) When resistors are placed side 1 by side (or in parallel ), the = resistance Rp effective total resistance is the R1 = first resistor 1 1 inverse of the sum of the re- + +.. R2 = second resistor ciprocals of the individual re- R1 R2 .. sistances (whew!). This formula is Ohm's Law . for capacitors. Here, C is a q = charge number specific to the capac- q = CV C = capacitance itor (like R for resistors), q is V = voltage the charge on one side of the capacitor, and V is the volt- age across the capacitor. pg. 9. SAT Subject Physics Formula Reference Magnetic Fields and Forces This formula gives the force F = force on a wire on a wire carrying current I. 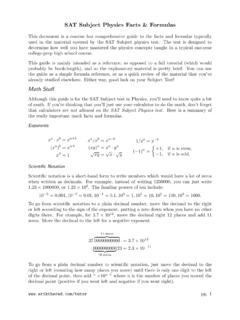 SAT Subject Physics Facts & Formulas resting on a table is zero: the weight of the book and the force of the table pushing up on the book add to zero. 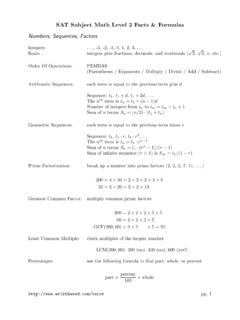 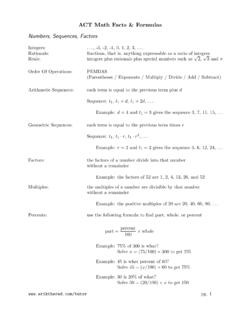 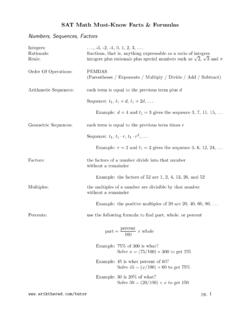 SAT Math Must-Know Facts & Formulas All triangles: h b Area = 1 2 ·b·h The area formula above works for all triangles, not just right triangles. Angles on the inside of any triangle add up to 180 . 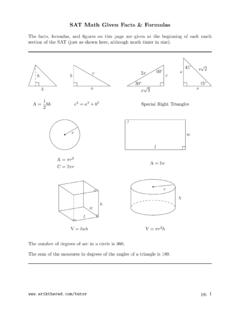 SAT Math Given Facts & Formulas Below is a brief explanation of the formulas and ﬁgures on page 1. Note that on the test you only get what is on page 1, not the explanations below. 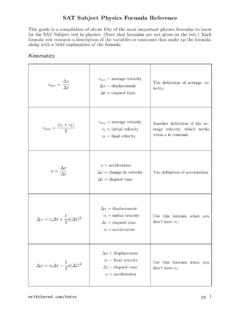 SAT Subject Physics FormulaReference This guide is a compilation of about ﬁfty of the most important physics formulas to know for the SAT Subject test in physics. 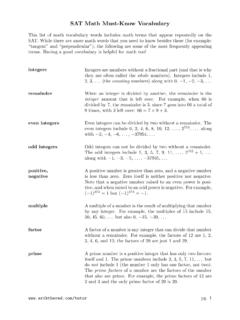 SAT Math Must-Know Vocabulary The following words are rarely seen; however, they deﬁne various concepts that you are expected to know on the SAT. 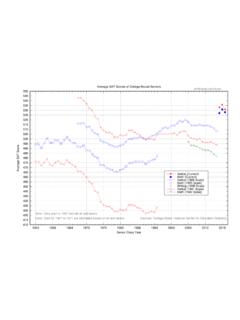 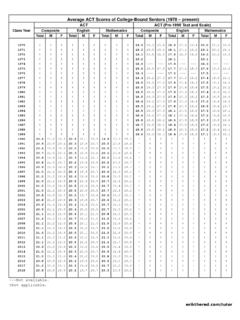 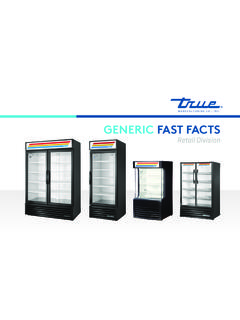 Generic FASTTop Reasons to Buy FACTS Warranty True’s exclusive 5-year compressor/condensing unit warranty is the envy of the industry. At no additional cost, our customers enjoy the option of having the entire condensing unit replaced. 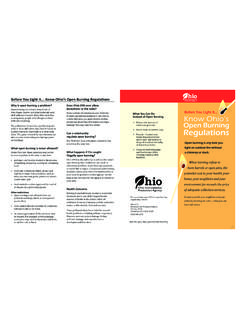 Before You Light It Know Ohio’s Open Burning Regulations

What You Can Do Instead of Open Burning For a complete copy of Ohio’s open burning regulations, contact: Ohio EPA Division of Air Pollution Control