LATENT DIRICHLET ALLOCATION This line of thinking leads to the latent Dirichlet allocation (LDA) model that we present in the current paper. It is important to emphasize that an assumption of exchangeability is not equivalent to an as-

2 Each topic is, inturn, modeled as an infinite mixture over an underlying set of topic probabilities. In the context oftext modeling, the topic probabilities provide an explicit representation of a document. We presentefficient approximate inference techniques based on variational methods and an EM algorithm forempirical Bayes parameter estimation. We report results in document modeling, text classification,and collaborative filtering, comparing to a mixture of unigrams model and the probabilistic IntroductionIn this paper we consider the problem of modeling text corpora and other collections of discretedata.

3 The goal is to find short descriptions of the members of a collection that enable efficientprocessing of large collections while preserving the essential statistical relationships that are usefulfor basic tasks such as classification, novelty detection, summarization, and similarity and progress has been made on this problem by researchers in the field of informa-tion retrieval (IR) (Baeza-Yates and Ribeiro-Neto, 1999). The basic methodology proposed byIR researchers for text corpora a methodology successfully deployed in modern Internet searchengines reduces each document in the corpus to a vector of real numbers, each of which repre-sents ratios of counts.

4 In the populartf-idfscheme (Salton and McGill, 1983), a basic vocabularyof words or terms is chosen, and, for each document in the corpus, a count is formed of thenumber of occurrences of each word. After suitable normalization, this term frequency count iscompared to an inverse document frequency count, which measures the number of occurrences of ac 2003 David M. Blei, Andrew Y. Ng and Michael I. ,NG,ANDJORDAN word in the entire corpus (generally on a log scale, and again suitably normalized). The end resultis a term-by-document matrixXwhose columns contain thetf-idfvalues for each of the documentsin the corpus.

5 Thus thetf-idfscheme reduces documents of arbitrary length to fixed-length lists thetf-idfreduction has some appealing features notably in its basic identification of setsof words that are discriminative for documents in the collection the approach also provides a rela-tively small amount of reduction in description length and reveals little in the way of inter- or intra-document statistical structure. To address these shortcomings, IR researchers have proposed severalother dimensionality reduction techniques, most notablylatent semantic indexing (LSI)(Deerwesteret al.)

6 , 1990). LSI uses a singular value decomposition of theXmatrix to identify a linear subspacein the space oftf-idffeatures that captures most of the variance in the collection. This approach canachieve significant compression in large collections. Furthermore, Deerwester et al. argue that thederived features of LSI, which are linear combinations of the originaltf-idffeatures, can capturesome aspects of basic linguistic notions such as synonymy and substantiate the claims regarding LSI, and to study its relative strengths and weaknesses, it isuseful to develop a generative probabilistic model of text corpora and to study the ability of LSI torecover aspects of the generative model from data (Papadimitriou et al.

7 , 1998). Given a generativemodel of text, however, it is not clear why one should adopt the LSI methodology one can attemptto proceed more directly, fitting the model to data using maximum likelihood or Bayesian significant step forward in this regard was made by Hofmann (1999), who presented theprobabilistic LSI (pLSI)model, also known as theaspect model, as an alternative to LSI. The pLSIapproach, which we describe in detail in Section , models each word in a document as a samplefrom a mixture model, where the mixture components are multinomial random variables that can beviewed as representations of topics.

8 Thus each word is generated from a single topic, and differentwords in a document may be generated from different topics. Each document is represented asa list of mixing proportions for these mixture components and thereby reduced to a probabilitydistribution on a fixed set of topics. This distribution is the reduced description associated withthe Hofmann s work is a useful step toward probabilistic modeling of text, it is incompletein that it provides no probabilistic model at the level of documents. In pLSI, each document isrepresented as a list of numbers (the mixing proportions for topics), and there is no generativeprobabilistic model for these numbers.

9 This leads to several problems: (1) the number of parame-ters in the model grows linearly with the size of the corpus, which leads to serious problems withoverfitting, and (2) it is not clear how to assign probability to a document outside of the training see how to proceed beyond pLSI, let us consider the fundamental probabilistic assumptionsunderlying the class of dimensionality reduction methods that includes LSI and pLSI. All of thesemethods are based on the bag-of-words assumption that the order of words in a document canbe neglected.

10 In the language of probability theory, this is an assumption ofexchangeabilityfor thewords in a document (Aldous, 1985). Moreover, although less often stated formally, these methodsalso assume that documents are exchangeable; the specific ordering of the documents in a corpuscan also be classic representation theorem due to de Finetti (1990) establishes that any collection of ex-changeable random variables has a representation as a mixture distribution in general an infinitemixture. Thus, if we wish to consider exchangeable representations for documents and words, weneed to consider mixture models that capture the exchangeability of both words and line of thinking leads to thelatent Dirichlet Allocation (LDA)model that we present in thecurrent is important to emphasize that an assumption of exchangeability is not equivalent to an as-sumption that the random variables are independent and identically distributed. 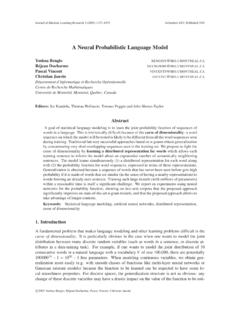 Only to be used for arranged hours, will count as two activities Task 1) Percent Mixture Problems Example 1: How many gallons of a 15% sugar solution must be mixed with 5 gallons of a 40% 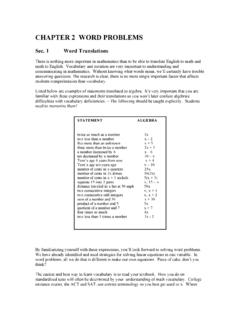 CHAPTER 2 WORD PROBLEMS Sec. 1 Word Translations There is nothing more important in mathematics than to be able to translate English to math and 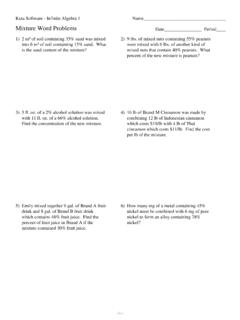 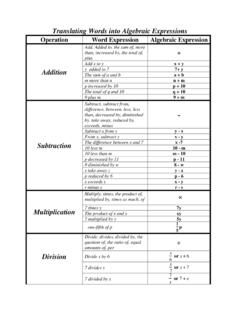 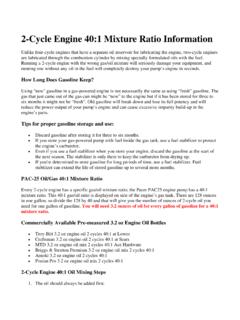 2-Cycle Engine 40:1 Mixture Ratio Information Unlike four-cycle engines that have a separate oil reservoir for lubricating the engine, two-cycle engines 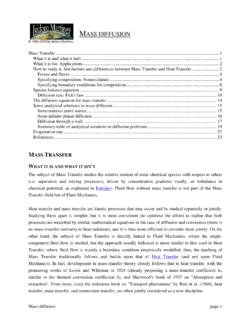 Mass diffusion page 2 As usual, the basic study first focuses on homogeneous nonreacting systems with welldefined - - boundaries (not only in Mass Transfer, but in …