4 Comprises two sets of cards: a set of first names and a set of surnames. There are also some blank cards if you want to give children the chance to make some suggestions of their own. Photocopy enough sets of both to enable all children to be given a first name card and a surname card; the cards will form the name of their character. They will also need a copy of resource 2: DAHLICIOUS DESCRIPTIONS. STARTER ACTIVITY: INTRODUCING AUGUSTUS GLOOP. Read aloud the first extract to the class, in which we are introduced to the first Golden Ticket winner, Augustus Gloop. Ask the children to close their eyes and listen carefully to the description. Give out paper and pencils and ask children to listen to the extract again, then to sketch an image of the boy based upon Roald dahl 's description.

5 Ask children to compare their sketch with a partner - they should end up with similar drawings. Why is this? Display the extract on the interactive whiteboard and ask children which words and phrases are the most effective and which features of language Roald dahl has used to build an image of Augustus. Draw out the fact that the author's use of clever and descriptive similes paints a very clear picture in the reader's mind. MAIN TASK: WHAT'S IN A NAME? 1. Now the children have a clear idea of what Augustus Gloop looks like, ask them to consider his name. Why do they think Roald dahl chose it? Does it suit Augustus? Why? Give children the second winner's name: Veruca Salt. What associations do they make? What do the children think Veruca might be like? Continued .. Illustrations Quentin Blake In association with @roald_dahl 3.

6 LESSON plan 1. 2. Read extract three, in which we meet Violet Beauregarde for the first time. This extract is a little about Violet's appearance but much more about her habits and behaviour. What do children think of Violet? Explain that the name Beauregarde' has been made up of two French words meaning pleasant' and look'. Do children think dahl has done this on purpose? Why? 3. Explain that names are an important part of a person's identity and that Roald dahl often used names to create an impression of a character. Explain that children are going to create their own character, starting with a name. 4. Give each child a first name and a surname card from resource 'S IN A NAME? Discuss any unfamiliar words the children may not know the expression light-fingered' for example.

7 Ask some children to share their character name with the rest of the class there should be a variety of combinations and some should raise a giggle or two! 5. Now give pairs of children a couple of minutes to come up with one or two suggestions as to habits, behaviours or physical features which the new characters may display. Ask children to share their best ideas and make a list on the board. Why these habits and behaviours? Did the names help form their ideas? Which behaviours might go with which names? Ask children to choose a behaviour or habit for their character. DEVELOPING THE ACTIVITY: DAHLICIOUS DESCRIPTIONS. Now children have a name and a behaviour, they should be starting to build a picture of their character in their mind. Remind children of dahl 's use of similes to describe Augustus Gloop.

8 Can children apply a simile to their own character? Children should now be ready to develop their character! Resource 2 prompts children to first make notes to describe their character, then to finish by using the notes to write a more detailed description, including similes. PLENARY: Invite one or two confident children to read aloud their descriptions and ask the rest of the class to close their eyes and listen. Do they have a clear picture of the character in their minds? Which words or phrases do they think are the most effective? Do children think they could draw the character? You may even want to ask them to do so and display a whole new set of Dahlicious characters for future inspiration! Illustrations Quentin Blake In association with @roald_dahl 4. EXTRACT FROM.

9 EXTRACT ONE. from Chapter six: The First Two Finders (91 words). The very next day, the first Golden Ticket was found. The finder was a boy called Augustus Gloop, and Mr Bucket's evening newspaper carried a large picture of him on the front page. The picture showed a nine-year-old boy who was so enormously fat he looked as though he had been blown up with a powerful pump. Great flabby folds of fat bulged out from every part of his body, and his face was like a monstrous ball of dough with two small greedy currant eyes peering out upon the world. Illustrations Quentin Blake In association with @roald_dahl 5. EXTRACT FROM. EXTRACT TWO. from Chapter eight: Two More Golden Tickets Found (287 words)..the third ticket was found by a Miss Violet Beauregarde. There was great excitement in the Beauregarde household when our reporter arrived to interview the lucky young lady cameras were clicking and flashbulbs were flashing and people were pushing and jostling and trying to get a bit closer to the famous girl.

10 And the famous girl was standing on a chair in the living room waving the Golden Ticket madly at arm's length as though she were flagging a taxi. She was talking very fast and very loudly to everyone, but it was not easy to hear all that she said because she was chewing so ferociously on a piece of gum at the same time. I'm a gum chewer, normally, she shouted, but when I heard about these ticket things of Mr Wonka's, I gave up gum and started on chocolate bars in the hope of striking lucky. Now, of course, I'm back on gum. I just adore gum. I can't do without it. I. munch it all day except for a few minutes at meal times when I take it out and stick it behind my ear for safekeeping. To tell you the truth, I simply wouldn't feel comfortable if I didn't have that little wedge of gum to chew on every moment of the day, I really wouldn't. 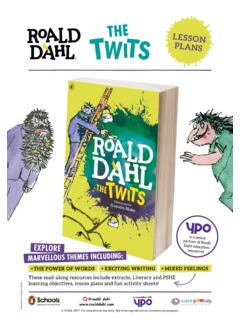 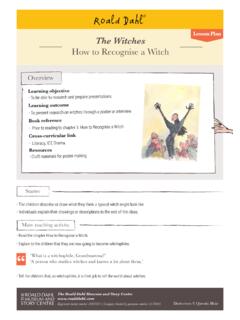 Lesson Plan The Witches How to Recognise a Witch - Roald …

Witche, Roald, Dahl, Recognise, Roald dahl, The witches how to recognise a 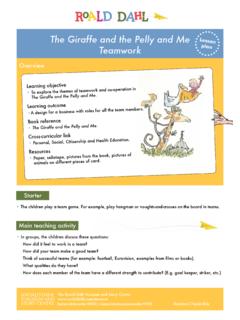 The Giraffe and the Pelly and Me - Roald Dahl

The Giraffe and the Pelly and Me - Teamwork cont. • Look at how Giraffe, Pelly and Me praise each other – for example, this quote: Group or independent activity

Teamwork, The giraffe and the pelly and, Giraffe, Pelly 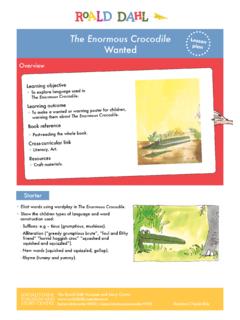 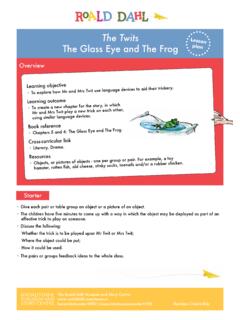 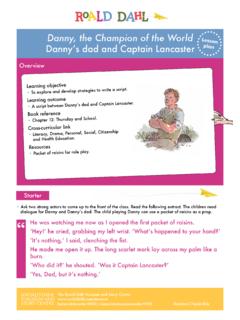 Danny, the Champion of the World - Roald Dahl

Danny, the Champion of the World Danny’s dad and Captain Lancaster • Ask two strong actors to come up to the front of the class. Read the following extract.

World, Champions, Danny, The champion of the world 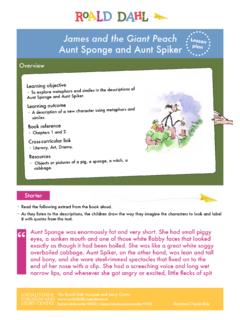 James and the Giant Peach - Aunt Sponge and Aunt Spiker cont. • Working in pairs, the children create another awful aunt for James, following these questions: - If the aunt was an animal, what animal would she 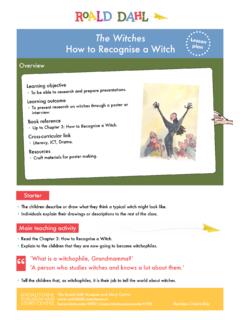 The Witches - How to Recognise a Witch cont. • In groups, the children complete this task: The BBC has seen your poster and wants to do an interview with a witchophile to learn more about these witches. 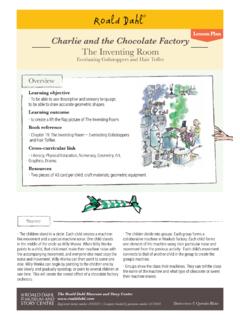 Charlie and the Chocolate Factory - The Inventing Room cont. • The children share their creations with their peers. By lifting the flaps, the children can see a …

Classroom Lesson Plans for Matilda Week 1: Chapters 1–6 ROALD The World’s No. 1 Storyteller ILLUSTRATED BY QUENTIN BLAKE Matilda About the Book: A young girl named Matilda Wormwood is precociously gifted but her wealthy, dimwitted