5 The term party's attorney or similar term whenever used in these Rules shall include a party appearing without counsel. The term clerk includes the Clerk of the United States District court for the District of Puerto Rico, the chief deputy clerk, and deputy clerks. The term marshal includes the United States Marshal and deputy marshals. (c) Numbering The numbering of the Local Rules tracks the numbers of the Federal Rules of Civil Procedure. Supplemental Local Rules concerning admiralty or maritime claims have been assigned letters A through F , corresponding to the pertinent Supplemental Rules for Certain Admiralty and Maritime Claims. Rules concerning specific Local matters have been listed under the letter H . (d) Citation Citation of a particular provision of the Local Rules of civil practice, including the Local Rules concerning admiralty or maritime claims, shall be by name and number, including the year of enactment when referring to a previous version of the rule: , Local Civil Rule or 1(e); Local Admiralty Rule or A (1997).

7 (a) Payment of Fees The filing fee shall be paid to the clerk upon filing the complaint. A party who desires to proceed in forma pauperis pursuant to 28 1915 shall file with the complaint a motion for leave to proceed in forma pauperis together with an affidavit showing in detail the party's inability to pay fees and costs and that the party is entitled to redress. All complaints shall be accompanied by a properly completed Civil Cover Sheet (Form JS-44), and Category Sheet which are available from the Clerk, and from the court 's website at, Except as otherwise required by law or ordered by the court , the clerk shall not docket any filings, issue any process, or render any other service for which a fee is prescribed by statute or by the Judicial Conference of the United States unless the fee is prepaid or in forma pauperis status has been granted. (b) In Forma Pauperis Applications (1) All Applications. All applications to proceed in forma pauperis shall be accompanied by a financial affidavit which shall disclose the applicant's income, assets, expenses, and liabilities, and shall be submitted in the forms approved by the Administrative Office of the Courts or provided by the clerk, or in a format substantially conforming to those forms and these Rules .

8 The court may require applicants who are not incarcerated to file an additional affidavit or produce additional information relevant to the applicant's financial ability to pay the full filing fee. (2) Applications by Incarcerated Persons. Incarcerated persons shall also submit, for the prior six-month period, and certified by the institution or entity, a copy of the trust fund account statement (or institution equivalent) showing the average monthly deposits to and the average monthly balance in the applicant's account. 28 1915, requires an inmate to pay the full filing fee when bringing a civil action. If insufficient funds exist in the inmate's account, the court will assess an initial partial filing fee. (3) Litigation Expenses. The granting of an application to proceed in forma pauperis does not waive the applicant's responsibility to pay the expenses of litigation which are not waived by 28 1915 and 1925. -4- (c) Form of Complaint in Social Security Actions and Civil Rights Cases Pursuant to 42 1983, and Prisoner Petitions Pursuant to 28 2241, 2254 or 2255.

9 (1) In any action based upon social security claims, employment discrimination, and non-prisoner or prisoner civil rights, or any other civil matter, in which a plaintiff files pro se (which means without assistance of an attorney), the complaint should be filed on the forms provided in the Clerk's office or found on the court 's web site at (2) Habeas corpus petitions under 28 2241, 2254, and 2255, and cases filed under the Civil Rights Act, 42 1983, shall be filed on forms available from the clerk, or found on the court 's website at, Section 2255 cases are to be filed without charge. (3) A petition not filed on the appropriate form shall be subject to the issuance of a notice of defective filing by the clerk. Failure to correct the filing by using the appropriate form within thirty (30) days from the notice of defective filing will cause the case to be submitted for final disposition by the court . The statute of limitations shall be tolled during said period.

10 (4) An indigent pro-se plaintiff or petitioner (28 2241 or 2254) may seek in forma pauperis status to file his or her action without payment of fees by filing the form affidavit available in the Clerk's office or found on the court 's web site at , along with the complaint or petition. The case will be given a civil docket number and the in forma pauperis application will be submitted to a judge of the court . If the judge denies in forma pauperis status, the plaintiff or petitioner will be given notice by written order that the case will be dismissed without prejudice if the fee is not paid by the date specified in the order. -5- RULE 3A. ASSIGNMENT AND REASSIGNMENT OF CASES. (a) Assignment and Reassignment in General; Case Assignment System. All actions or proceedings of a civil nature shall be numbered consecutively upon the filing of the first document in each action or proceeding. Neither the clerk nor any judge shall have any discretion in determining the judge to whom any matter is assigned.

UNITED STATES DISTRICT COURT FOR THE …

may 2017. united states district court . for the . district of wyoming. local civil rules

UNITED STATES COURT OF APPEALS FOR THE … 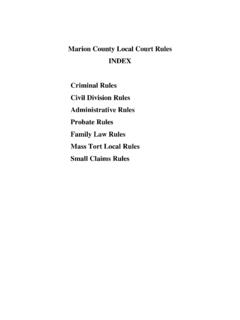 Local Rules of the United States Bankruptcy Court for the Eastern District of Kentucky 2 RULE 3002-1. CLAIMS - BY CREDITOR HOLDING A CLAIM IN …

Local Rules for the U.S. District Court, District of …

IN THE UNITED STATES DISTRICT COURT FOR THE DISTRICT OF KANSAS ORDER OF ADOPTION Pursuant to the authority vested in this Court by Rule and Statute: