2 growth rates of emerging countries will eventually slow, converging towards those projected for the OECD area. growth and living standards are supported by active implementation of fiscal and structural reforms. In parallel, the relative size of economies will change radically over the next 50 years. The combined GDP of China and India will soon surpass that of the G7 economies and will exceed that of the entire current OECD membership by 2060. The GLOBAL saving rate will remain fairly stable until 2030. The rising weight of high-saving countries especially China and India will compensate for the tendency of private saving rates to fall in individual countries, mostly on account of ageing.

4 Ambitious product market reforms, which raise productivity growth , could increase GLOBAL GDP by an average of about 10%. Policies that induce convergence towards best practice labour force participation could increase GDP. by close to 6% on average. GLOBAL imbalances could widen up until 2030 perhaps reaching pre-crisis levels, but deeper and faster structural and fiscal reforms could reduce imbalances by as much as one-quarter by then. The GLOBAL economy faces a number of challenges in the short and the long -term 1. The GLOBAL economy currently faces serious challenges and policy action is needed to restore confidence and put the economic recovery onto a sustainable growth path.

5 Many countries face a long period of adjustment to absorb the legacies of the crisis, particularly in terms of high unemployment, excess capacity and large fiscal imbalances. Further ahead, demographic changes, including ageing, and economic convergence will bring about large shifts in the composition of GLOBAL GDP. In the scenario presented here, countries confront these challenges and the appropriate policy responses and structural reforms are taken in order to ensure that growth returns to a sustainable path. Thus, the scenario embeds sustained, albeit not dramatic, policy improvements in both advanced and emerging economies in a number of areas including labour and product markets, fiscal consolidation and reforms of welfare and financial policies.

6 2. The working hypothesis underlying this note is that the crisis has only reduced the level of trend GDP, currently and over the next few years, and has had no permanent effects on trend growth rates. Moreover, in keeping with the long -term focus, possible repercussions on trend output of prolonged period of deficient demand are ignored. Thus, the resulting long -term scenario provides a relatively benign long - term outlook for the GLOBAL economy. Indeed, a number of other factors are also ignored, including the possibility of disorderly debt defaults, trade disruptions and possible bottlenecks to growth due to an unsustainable use of natural resources and services from the environment.

7 GLOBAL growth will be sustained by emerging countries, though at a declining rate 3. Over the next half century, the GLOBAL economy is projected to grow at around 3% per annum on average. The OECD-wide trend GDP growth rate is projected at about 2% annually to 2060, with declining 1. rates in many countries after the recovery from the current crisis. But, GLOBAL growth will remain fairly stable because relatively fast-growing countries will progressively account for a larger share of GLOBAL output. Indeed, growth in non-OECD countries will continue to outpace the OECD average, though the difference will narrow over coming decades.

8 From over 7% per year over the past decade, non-OECD growth will decline to around 5% in the 2020s and to about half that by the 2050s (see Annex Table). Until 2020, China will have the highest growth rate of any country, but will be then surpassed by both India and Indonesia. Ageing will be a drag on growth in many countries, while improvements in education will sustain it 4. These trends in GDP growth are driven by population ageing, which will exert downward pressure on labour input, and productivity developments that differ widely across countries. Population ageing, due to the decline in fertility rates and generalized gains in longevity, has a negative effect on trend growth as it leads to a declining share of the working age population, with potentially negative effects for labour force participation.

9 Population projections suggest that ageing over the next 50 years will be particularly rapid in Asia, Eastern European countries and Southern European countries with old-age dependency ratios more than doubling, and even quadrupling in China (Figure 1).1,2 Indeed, more rapid ageing in this country partly explains why India and Indonesia will overtake China's growth rate in less than a decade. Taking into account developments of all age groups, total population over the next 50 years is estimated to increase by per year globally. All else equal, comparatively high overall population growth will act as a drag on GDP per capita growth in a number of countries ( English speaking countries and some emerging economies) (see Annex Table).

10 Figure 1. Populations will age in most countries Per cent of the population older than 65 as a share of population aged 15-64. 80. % 2060 2030 2011. 70. 60. 50. 40. 30. 20. 10. 0. 1. The increase in the old-age dependency ratio quoted in the text is based on a fixed age threshold of 65. years. This may given an overly pessimistic impression as it is likely that gains in longevity will result in longer active working-lives, which would require an evolving definition of working-age population. 2. Population projections are sourced from Eurostat (Europop, 2010) for European countries, while for non- European countries projections are from the United Nations Population Database 2.

GLOBAL TRENDS AND FUTURE CHALLENGES FOR …

4 Global financial crisis, economic growth and poverty 11. The current macroeconomic outlook is characterized by a high degree of uncertainty. 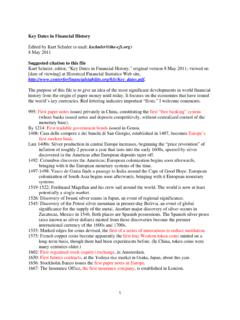 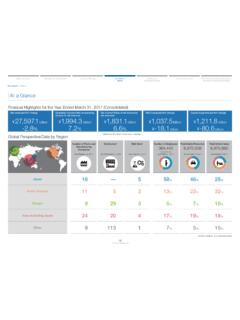 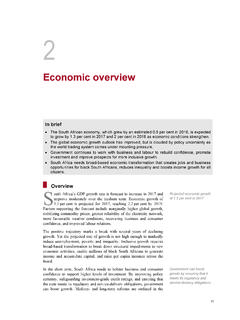 CHAPTER 2: ECONOMIC OVERVIEW 13 The outlook for sub-Saharan Africa, a major export destination for South African manufacturers, has been revised marginally up to …

Outlook (Un)Steady as She Goes Investment Strategy Group | January 2018 Investment Management Division “We cannot direct the wind, but we can adjust the sails.”