Managing bribery and corruption risks The real estate, construction and infrastructure industry Second edition Contents 4 Introduction 6 corruption pressure points 7 Are companies doing enough to mitigate risk? 8 What more should companies be doing? 13 How EY can help? 14 EY service to its clients 15 Contacts Every dollar spent on bribes is a dollar not spent on innovation.. Brackett Denniston Senior Counsel, Goodwin Procter Managing bribery and corruption risks | 1. Introduction This is the second edition of EY Managing bribery and corruption risks in the Since the last edition, the regulatory environment has become more construction and infrastructure industry. Originally published in 2012, it has complex. Enforcement is on the rise, with new legislation in many countries. been extended to include the real estate sector. The foreign bribery laws of the US and the UK are extraterritorial in their application.

1 “Every dollar spent on bribes is a dollar not spent on innovation.” Brackett Denniston Senior Counsel, Goodwin Procter Managing bribery and corruption risks|

1 Managing bribery and corruption risks The real estate, construction and infrastructure industry Second edition Contents 4 Introduction 6 corruption pressure points 7 Are companies doing enough to mitigate risk? 8 What more should companies be doing? 13 How EY can help? 14 EY service to its clients 15 Contacts Every dollar spent on bribes is a dollar not spent on innovation.. Brackett Denniston Senior Counsel, Goodwin Procter Managing bribery and corruption risks | 1. Introduction This is the second edition of EY Managing bribery and corruption risks in the Since the last edition, the regulatory environment has become more construction and infrastructure industry. Originally published in 2012, it has complex. Enforcement is on the rise, with new legislation in many countries. been extended to include the real estate sector. The foreign bribery laws of the US and the UK are extraterritorial in their application.

2 For multinational companies working on projects with multiple Since 2012, as the effects of the 2008 financial crisis have receded, the partners in different jurisdictions, creating a cohesive culture of compliance industry has grown. By 2025, global infrastructure spending is predicted is a major challenge. to reach US$9 trillion, up from US$4 trillion in For both the public and private sectors, this is a market of critical economic, political and social By far the largest share of the growth will be in emerging markets, driven by importance. China and Asia-Pacific, the rise of the new middle class, and the megacities necessary to accommodate it. Furthermore, companies in these markets are According to the Organisation for Economic Co-operation and Development investors in infrastructure in their own right: their developers, contractors, (OECD),2 the real estate, construction and associated industries are among purchasers and suppliers finance, build and operate some of world's largest the sectors with the highest level of corruption risk: 40% of foreign bribery projects in both developed and developing countries.

3 Cases occurred in construction, transportation, and information and communication. According to EY's Global Fraud Survey 2016,3 13% of the companies surveyed thought that bribery was common practice in the industry well above the average for all other industries industries. Figure 1: OECD Foreign bribery Report 2014. Which sectors are most at risk? 67%. 8% 10% 15% 15% 19%. Manufacturing Information and Transportation Construction Extractive communication and storage Two-thirds of foreign bribery cases occurred in ve sectors. While developed countries are not immune to corruption , comparatively, In short, companies are caught between the need to comply with an many of the emerging markets have a weak legislative structure and a increasingly stringent regulatory environment, and the reality of doing business culture that tolerates, if not encourages, corruption . This increases business in a high-risk industry and in high-risk jurisdictions.

5 3 . 2 | Managing bribery and corruption risks Managing bribery and corruption risks | 3. corruption pressure points We will work on There are four main reasons why the risk of corruption is so high in the industry: cross-border Demand side ( bribe takers ). The size of projects, the source of funding and the authority for cooperation making decisions is often in public sector hands. Whether at the design stage, award of the contract or approval of permissions and licenses, government is involved. With decision-making control and information concentrated in the hands of a relatively small number of people, there are many opportunities for solicitation by public officials. sharing between Supply side ( bribe givers ). On the supply side, most projects involve a large number of local law enforcement subcontractors, consultants and agents. Many involve a joint venture partner. These companies and individuals may be willing to pay bribes or offer gifts to win contracts or obtain permits.

6 With and anti- corruption legislation increasingly putting responsibility on the chief contractor for the behavior of third parties in their supply chains, even the most responsible multinational companies find themselves agencies and vulnerable. Third-party fraud judicial authorities. There is a risk of fraudulent behavior by companies toward the client. For example, complex projects often involve changes to specifications and cost overruns. They also employ thousands of people and vendors. Such situations offer opportunities for G20 Leaders' Communique companies at all stages of the project to attempt to falsify invoicing, substitute or steal materials, manipulate labor costs, misrepresent Hangzhou Summit (September 2016) themselves, or organize themselves into cartels and engage in bid-rigging or collusion against bona fide competitors. Some of this behavior may even be generated by organized crime networks.

7 Employee fraud With the significant difference between the large sums at stake in these projects and the relatively modest remuneration of employees involved in all stages of the process, there is potential for fraudulent behavior by individuals against their employers. Poor governance, lack of transparency, legal loopholes and family ties also present the potential for conflicts of interest. 4 | Managing bribery and corruption risks Are companies doing enough to mitigate risk? International companies are becoming increasingly aware of the risks and the human, financial and societal costs of corruption . Many companies are instituting systems that control and review at every stage of the process, from project design to project delivery. Creating a low risk environment is achieved through a rigorous and Implementing clear contracts with consultants and agents disciplined approach to prevention, detection and investigation.

8 That refer to anti- corruption procedures and give the company audit rights over relevant contract records, and undertaking. Managing risk Undertaking regular vendor audits Implementing a system of review and approval of payments to At a generic level, the process starts by setting the correct tone third parties including expenses claims at the top. The concept of corporate culture has been much discussed but not always clearly defined. Companies' culture is Using forensic data analytics to detect transactions that indicate a mix of the stated values of the institution, the personal beliefs a heightened risk of bribery and corruption of the leadership, and the behavior and track record of top Monitoring expenses such as corporate entertainment carefully, management. The chairman, board and senior executives that run paying particular attention to the recipient, context and timing of the business should all be fully and visibly committed to creating a the entertainment or gift corruption -free zone throughout the company and up and down its value chains.

9 Instituting a whistle-blowing system that is acceptable and accessible to local employees, associates, third parties and the wider community Prevention Prevention is better than a cure. Many companies are expending Investigation considerable resource to ensure that they avoid even coming into corruption cannot be eliminated completely. Even the most diligent contact with corrupt partners. Actions include: companies may find themselves having to defend themselves in Undertaking a comprehensive bribery and corruption risk court for actions taken by a rogue employee or third-party vendor assessment considering the type and location of projects so allegedly acting on the company's behalf. The following procedures that specific risks are identified and understood should be in place: Designing and implementing a code of conduct, with a full A process for internal investigations that is proportional and communication and training program effective Creating and implementing a compliance program with training The capability to react quickly to any whistle-blower allegations for employees and third-party employees alike or government requests for information An external and internal communications strategy in case of an Detection investigation initiated by the public authorities Companies are instituting rigorous tracking systems that A clear process for triggering the involvement of external legal highlight unusual behavior and financial flows, and provide data and accounting advice where serious breaches cannot be handled and information about third-party suppliers and employees.

10 Internally Organizations should be implementing the following procedures: Conducting due diligence on contractors, subcontractors, agents and employees Managing bribery and corruption risks | 5. What more should companies be doing? corruption challenges in major growth markets are not diminishing. The publication of the Panama Papers in early 2016 showed that, if anything, those with criminal intent are one step ahead of the authorities. At the same time, international cooperation among anti- corruption and money laundering authorities is increasing. The EY Global and EMEIA Fraud surveys over successive years show Due diligence marked progress in companies' increasingly disciplined approach Figure 3: Companies are doing less to preventing, detecting and investigating criminal activity by their employees and business partners. This includes companies Developed Emerging All Real estate making continual rigorous and self-critical assessments of their own markets markets respondents behavior. 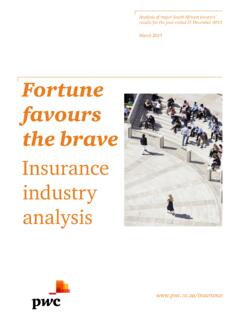 100 Insurance industry analysis – Fortune favours the brave About this publication We are pleased to present the second edition of PwC’s analysis of major insurers’ results.