MANAGING HIV/AIDS IN THE WORKPLACE - …

3 Chapter 12 Treatment, care and support programmes .. 87. Chapter 13 Capacity building .. 95. Chapter 14 Communication strategies .. 101. PART D REPORTING, MONITORING AND EVALUATION. Chapter 15 Introduction to HIV/AIDS reporting, monitoring and evaluation .. 105. Chapter 16 Monitoring and reporting on WORKPLACE HIV/AIDS policies and programmes .. 107. APPENDICES. Appendix One: References, contacts and websites .. 113. Appendix Two: Part VI of Chapter 1 of the Public Service Regulations, 117. Appendix Three: Collective Agreement, PSCBC Resolution No. 8 of 119. Foreword By the Minister for the Public Service and Administration The impact of HIV/AIDS and other chronic diseases is being felt in the country as a whole, and the WORKPLACE is no exception. With infection rates still on the increase, departments must be prepared to deal effectively with HIV/AIDS so as to maintain high productivity and service delivery levels whilst avoiding discrimination of those infected or affected.

4 Partnerships between government and the private sector have to be forged in order to develop and implement policies and programmes that are aimed at combating the spread of the virus and mitigating the impact of the aids pandemic. As the single biggest employer in South Africa, with nearly million public servants employed by approximately 140. government departments at national and provincial level, there is no doubt that the Public Service has a crucial role to play in mitigating the impact of HIV/AIDS as part of its overall focus on the health and well-being of its members. Large numbers of people are also direct dependants of public servants, and as a result the fate of society as a whole is closely intertwined with the health and well being of public servants. Recognising the serious nature of HIV/AIDS and its impact on South Africa, I initiated the Impact and Action Project in January 2000 which is aimed at ensuring that the Public Service is able to sustain a quality service in spite of the progression of the aids .

5 Pandemic. In consultation with stakeholders the Department of Public Service and Administration has developed a policy framework to guide departments on the minimum requirements to effectively manage HIV/AIDS in the WORKPLACE and to ensure a co-ordinated Public Service response. Department of Public Service and Administration 1. To give effect to this policy framework I have, on 21 June 2002. under Section 41 of the Public Service Act,1994, amended the Public Service Regulations, 2001, with regard to the proper management of HIV/AIDS in the WORKPLACE . The policy framework is aimed at ensuring that the working environment supports effective and efficient service delivery, while as far as reasonably possible, taking employees' personal circumstances, including disability, HIV/AIDS . and other health conditions into account. To assist with the implementation of the Regulations, the DPSA. has developed this Guide which provides practical guidance and information on how departments should respond to the threat of HIV/AIDS in the WORKPLACE and as such the Guide complements the Regulations.

6 In essence the Guide is expected to assist departments in planning, developing, implementing and monitoring and evaluating WORKPLACE HIV/AIDS policies and programmes. In conclusion, I wish to express my gratitude to the Impact and Action Project Steering Team and its subcommittees for the important role that they played in the development of this Guide. My special thanks go to all government departments as well as individuals in both the Public Service and the private sector who gave their invaluable inputs to this Guide. The authors deserve a special thanks. I am also pleased to acknowledge the assistance received from the Canadian International Development Agency (CIDA) and United States Agency for International Development (USAID) for sponsoring the development of this Guide. Ms GJ FRASER-MOLEKETI. MINISTER. JULY 2002. MANAGING HIV/AIDS in the WORKPLACE A Guide for Government Departments Glossary of Terms and Concepts aids Acquired Immune Deficiency Syndrome - a syndrome (collection of diseases) that results from infection with HIV.

7 Antibodies Substances produced by cells in the human body's immune system in response to foreign substances that have entered the body Asymptomatic Infected by a disease agent but exhibiting no medical symptoms Care A broad term referring to the steps taken to promote a person's well-being through medical, psychosocial, spiritual and other means Clinical trial Research to determine the safety and efficacy of a new drug or treatment Confidentiality The right of every person, employee or job applicant to have their medical information, including HIV status, kept private ELISA test Enzyme Linked ImmunoSorbent Assay - the test used to identify the presence or absence of HIV antibodies Epidemic A disease, usually infectious, that spreads quickly through a population Epidemiology The study of the distribution and determinants of disease in human populations Evaluation The assessment of the impact of a programme at a particular point in time Health promotion Programmes aimed at ensuring the physical and mental health and well-being of employees HIV Human immunodeficiency virus - the name of the virus which undermines the immune system and leads to aids .

8 HIV testing Any form of testing designed to identify the HIV status of a person, including blood tests, saliva tests or medical questionnaires Immune system A complex system of cells and cell substances that protects the body from infection and disease Incidence of HIV The number of new cases of HIV in a given time period, often expressed as a percentage of the susceptible population Minimum Amendments to Part VI of Chapter 1 of the Public Service Standards on Regulations, 2001, as gazetted in the Government Gazette - HIV/AIDS Regulation Gazette (Vol. 444, No. 23517, Pretoria, 21 June 2002) and subsequently reissued on 12 July 2002. Department of Public Service and Administration 3. Monitoring The systematic and continuous assessment of a programme over a period of time Occupational exposure Exposure to blood or other body fluids, which may be HIV. infected, during the course of carrying out working duties (for example, a health care worker may be exposed to HIV in the case of a needlestick injury).

9 Opportunistic infections Infections that occur because a person's immune system is so weak that it cannot fight the infections Pandemic An epidemic occurring simultaneously in many countries Policy A document setting out a department's or organisation's position on a particular issue (for example, a policy setting out the steps to be taken following occupational exposure to HIV). Positive living skills Skills that empower people living with aids (PLWAs) to cope with the difficulties and challenges they might face, and to live a long and fulfilling life Prevalence of HIV The number of people with HIV at a point in time, often expressed as a percentage of the total population Prevention programme A programme designed to prevent HIV transmission, including components such as awareness, education and training, condom distribution, treatment of sexually transmitted infections, occupational infection control Rapid HIV testing An HIV testing process which enables a test result to be achieved within 10 to 30 minutes Seroconversion The point at which the immune system produces antibodies and at which time the HIV antibody test can register an HIV.

10 Infection Support Services and assistance that could be provided to help a person deal with difficult situations and challenges Treatment A medical term describing the steps being taken to care for and manage an illness Unfair discrimination Unfair discrimination occurs when an employee is treated differently due to their real or perceived HIV status, in a way that impairs their fundamental dignity. Discrimination is not unfair if it is based on the inherent requirements of a job Wellness programme A programme designed to promote the physical and mental health as well as the well-being of employees, including components such as counselling, support groups, nutritional supplements, provision of treatment for opportunistic infections, provision of anti-retroviral therapy Window period The period between infection with HIV and seroconversion (when HIV antibodies can be detected by the HIV antibody test). WORKPLACE programme An intervention to address a specific issue within the WORKPLACE (for example, providing staff access to a voluntary HIV counselling and testing programme).

HIV/AIDS Care and Support in the Workplace 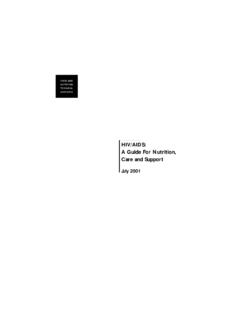 HIV/AIDS: A Guide For Nutrition, Care and Support

Standards of Care for People Living with HIV - …

BACKGROUND The first case of HIV/AIDS in Bangladesh was detected in 1989. Since then 1495 cases of HIV/AIDS have been reported (as of December 2008). 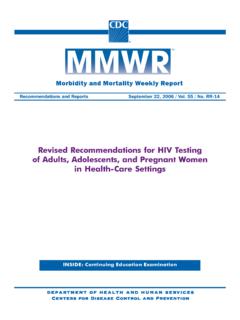 Revised Recommendations for HIV Testing of …

Vol. 55 / RR-14 Recommendations and Reports 1 The material in this report originated in the National Center for HIV/AIDS, Viral Hepatitis, STD, and TB Prevention (proposed),