3 Patient pain levels and comments were recorded. Special considerations were given around thorocotomy incision site, IV's, drains, and patient positioning. Results: Pre Massage palpations indicated tight and restricted facia and presence of Subcutaneous emphysema in bilateral upper extremities, neck and head with crepitus. As Massage services progressed the density of Subcutaneous air dissipated with less crepitus. Patient comments indicate Massage services were beneficial in relieving pressure and tightness . Conclusions: More scientific studies and research are needed to accurately use Massage Therapy as the option of care for Subcutaneous emphysema .

4 However, based on audible reduced crepitus, changes palpated in affected tissues and the palpated decrease in density of Subcutaneous air, more research could be legitimized. Additionally, patient comments consistently indicate relief from Massage services and could be studied in a pain management setting or as a palliative care option. Case Report The patient is a 62-year old Caucasian woman, former smoker of over 30 years, with a history of coronary artery disease, carotid artery stenosis, hypertension and hyperlipidemia. In 2002 she received an implantable cardioverter-defibrillator.

5 During a routine checkup of the device a 6mm nodule was discovered in her lower left lobe. The patient was scheduled for a lobectomy to biopsy the mass. Day 1 post-surgery: Patient suffers acute right side cerebral ischemia in the small vessel territory resulting in left sided hemiplegia. Hospital staff concludes that the stroke occurred due to being taken off aspirin regimen pre surgery. Left side facial weakness is noted with moderate to severe swelling of neck and face. The patient complains of impaired eyesight with pressure and tightness in bilateral upper extremity and neck.

6 Upon palpation, extensive Subcutaneous emphysema is discovered in bilateral upper extremities, neck and face. Hospital staff concludes this is due to surgery procedures and determine it to be benign and self-limiting in nature. Patient was placed on anticoagulation medication to manage atrial fibrillation and transient ischemic attack, beta blockers for hypertension and a pain medication regimen of oxycodone. Massage Therapy for Subcutaneous emphysema , a Case Study 1. Kyle M Hierholzer LMT. Day 2 post-surgery: Patient facial swelling has not decreased and patient pain levels have increased due to Subcutaneous emphysema .

7 Patient states 2/10 pain around thorocotomy incision starting at the inferior angle of the scapula moving laterally in a convex shape to the mid axillary region. Patient reports facial swelling with impaired vision, labored breathing, pain and discomfort in bilateral shoulders and neck and requests Massage services. Day 3 post-surgery: Upon arrival, patient is found seated upright at bedside chair in no acute distress with family member present in the room who left at the start of the session. Patient requests Massage to bilateral upper An abdominal CT scan of a patient with subcu- extremity and neck.

8 Patient was unable to state pre- taneous emphysema Massage pain level commenting it feels tight and like ( there's a lot of pressure . Supportive pillows were placed physema). under bilateral elbow complex to promote relaxation of the glenohumeral joint and on the floor underneath bilateral feet to support the lumbar spine. Due to risks of bleeding and bruising from anti-coagulation and beta-blocker medication, a very light pressure was determined to be used for Massage services. Small air pockets could be felt upon palpation throughout the entire bilateral upper extremities and neck.

9 As very light pressure effleurage was used the Subcutaneous emphysema could be felt moving throughout the tissues with crepitus. Gentle Massage strokes were utilized starting at the base of the occiuput continuing in a longitudinal muscle fiber direction throughout upper trapezius and deltoid to the deltoid tuberosity. These same strokes were also used in bilateral scalene, pec major, teres major and rhomboid muscle groups with the same effect. A high concentration of air could be palpated in superior upper trapezius directly inferior to the base of the occiuput.

10 During the Massage the patient asked several times Is this normal? , Have you seen this before? , Will it go away? . Patient's questions were answered to best of ability within scope of practice and experience. As the Massage progressed the Subcutaneous emphysema began to dissipate and spread evenly throughout the tissue with less crepitus. Tissue in the areas being massaged became softer and pliable upon palpation. Breathing pattern was observed to be shallow at first and the patient was observed to be taking deeper breaths as the Massage progressed. 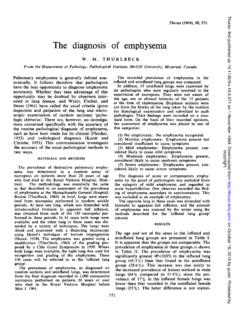 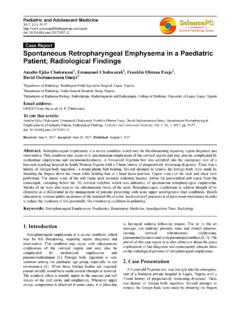 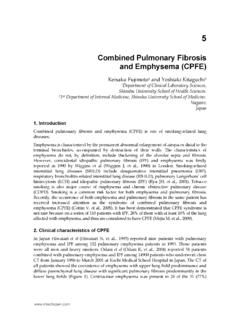 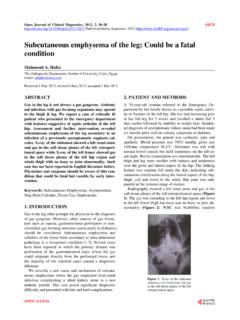 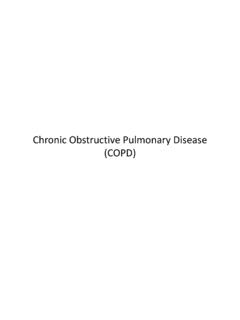 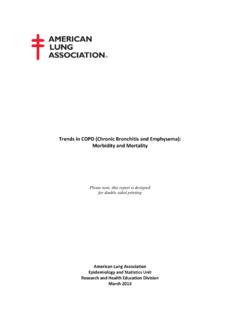 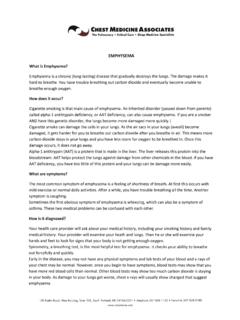 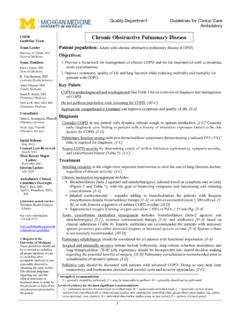