Appendix0512BP Page 1 May 12, 2002 THE LEADERSHIP PRACTICES INVENTORY: THEORY AND EVIDENCE BEHIND THE FIVE PRACTICES OF EXEMPLARY LEADERS There is considerable empirical support for the Five Practices of Exemplary Leadership

2 In-depth interviews and written case studies from personal-best LEADERSHIP experiences generated the conceptual framework, which consists of five LEADERSHIP PRACTICES : Modeling the Way Inspiring a Shared Vision Challenging the Process Appendix0512BP. Page 2. Enabling Others to Act Encouraging the Heart. The actions that make up these PRACTICES were translated into behavioral statements. Following several iterative psychometric processes, the resulting instrument has been administered to over 350,000 managers and non-managers across a variety of organizations, disciplines, and demographic backgrounds. A version of the LPI has also been developed for specific use with high school and college Validation studies that we, as well as other researchers, have conducted over a fifteen-year period consistently confirm the reliability and validity of the LEADERSHIP PRACTICES inventory and the five PRACTICES of exemplary Leaders model.

3 Overall, the LPI, has been extensively applied in many organizational settings and is highly regarded in both the academic and practitioner world. 3. The conceptual portion of the five PRACTICES of exemplary Leaders framework grew out of the collection and analysis of case studies of personal-best LEADERSHIP experiences. The Personal-Best LEADERSHIP Experience questionnaire is twelve pages long and consists of thirty-eight open-ended questions, such as these: Who initiated the project? What made you believe you could accomplish the results you sought? What special, if any, techniques or strategies did you use to get other people involved in the project? Did you do anything to mark the completion of the project, at the end or along the way? What did you learn most from this experience? What key lessons would you share with another person about LEADERSHIP from this experience?

4 Completing the Personal-Best questionnaire generally requires about an hour of reflection and expression. We've collected more than 4,000 of these surveys and over 7,500 additional respondents have completed a short form of this survey. In addition to the case studies, in-depth interviews have been conducted across from managers and individual contributors across a wide variety of public and private-sector companies Appendix0512BP. Page 3. around the world. These interviews have generally taken forty- five to sixty minutes; in some cases, they have lasted four to five hours. The total number of interviews now numbers well over 500 respondents. The experience (and the process) has been relatively consistent over the nearly two decades that we have been collecting case studies. The LPI was created by developing a set of statements describing each of the various LEADERSHIP actions and behaviors.

5 Each statement was originally cast on a five - point Likert scale, and reformulated in 1999 into a more robust and sensitive ten-point Likert-scale. A higher value represents more frequent use of a LEADERSHIP behavior. For example: (1) Almost never do what is described in the statement; (2) Rarely; (3) Seldom;. (4) Once in a while: (5) Occasionally; (6) Sometimes; (7) Fairly Often; (8) Usually; (9). Very Frequently; and, (10) Almost always do what is described in the statement. Statements were modified, discarded, or included following lengthy discussions and iterative feedback sessions with respondents and subject matter experts as well as empirical analyses of various sets of behaviorally based statements. Ongoing analysis and refinements in the instrument continue, with a database involving well over 100,000. respondents. The LPI contains thirty statements six statements for measuring each of the five key PRACTICES of exemplary leaders.

6 Both a Self and Observer form of the LPI have been developed. In addition, subsequent forms of the LEADERSHIP PRACTICES inventory have been developed for use with various populations. For example, there is a version for use with individual contributors or non-managers (LPI-Individual Contributor), another for use with a group of people (LPI-TEAM), and one for use with college students (LPI- Student). These instruments have both a Self and Observer version, and all have been subject to the same psychometric analyses as were applied originally to the Participating individuals first complete the LPI-Self and subsequently request five -to-ten Appendix0512BP. Page 4. people familiar with their behavior to complete the LPI-Observer. The LPI-Observer is voluntary and generally anonymous (respondents can indicate their relationship to the leader; as in, this individual is my manager, co-worker or peer, direct report, or other).

10 Between .78 and .90 for a cross-section of mid-level managers,12 between .70 and .88 for home health care agency directors,13 between .82 and .84 for adults enrolled in a community LEADERSHIP development program,14 above .70 for female college student affairs officers,15 between .93 and .97 for nursing managers,16 between .73 and .90 for healthcare managers,17 and between .82 and .94 for hotel managers,18 Reliabilities for non-Caucasians ranged between .68 and .80, while for their white counterparts in this study the range was between .60 and . In several studies, involving populations, reliabilities have also been more than acceptable. For example, in a study involving Australian bank managers, reliabilities on the LPI-Self ranged from .70 to .82 and for the LPI-Observer ranged from .81 to . Reliabilities ranged between .82 and .93 for a sample of therapeutic radiographers from Hong Internal reliability for a Spanish-language version of the LPI, with Mexican respondents, ranged between. 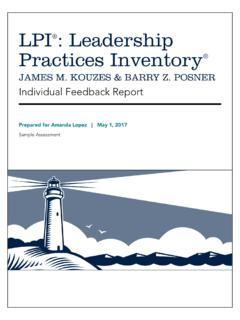 The Five Practices of Exemplary Leadership® Created by James M. Kouzes and Barry Z. Posner in the early 1980s and first identified … 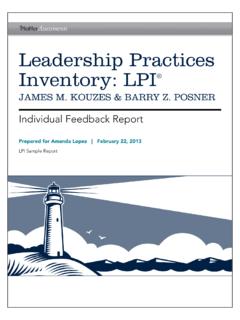 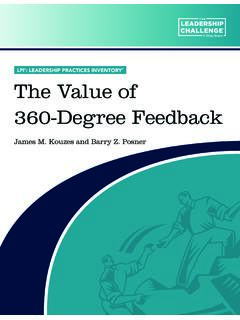 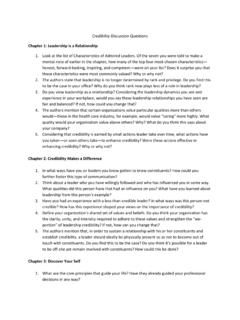 Credibility Discussion Questions . Chapter 1: Leadership is a Relationship . 1. Look at the list of Characteristics of Admired Leaders. Of the seven you were told to make a

CHAPTER 1. WHEN LEADERS ARE AT THEIR BEST

Discussion Questions, p. 2 Think of a time that you or a leader you know successfully Modeled the Way. Describe what happened. What are common obstacles to Modeling the Way? Which kin 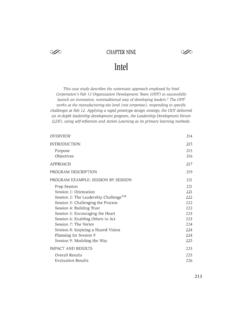 the conference. The LDF program philosophy, key components, and results were shared in a presentation following the conference’s keynote speaker, Intel’s vice

At Oracle, the North America Sales and Consulting (NASC) group had been exposed to and valued the core Leadership Challenge concepts for several years. 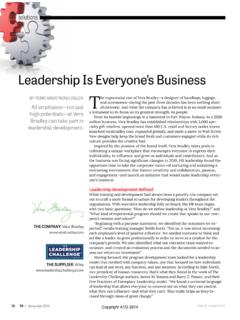 November 2014 | TD 71 The experience Working with FlashPoint, an autho-rized provider of The Leadership Challenge Workshop, the Vera Brad-ley … 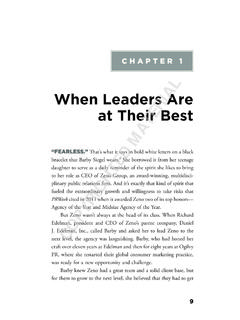 CHAPTER 1 When Leaders Are at Their Best “ FEARLESS. ” Th at ’ s what it says in bold white letters on a black bracelet that Barby Siegel wears. 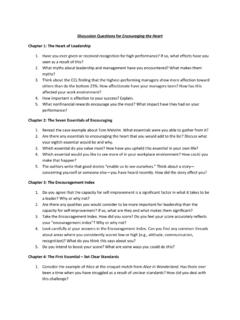 Discussion Questions for Encouraging the

Discussion Questions for Encouraging the Heart Chapter 1: The Heart of Leadership 1. Have you ever given or received recognition for high performance? 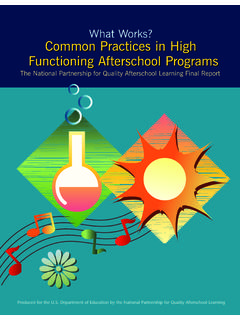 Produced for the U.S. Department of Education by the National Partnership for Quality Afterschool Learning Common Practices in High Functioning Afterschool Programs 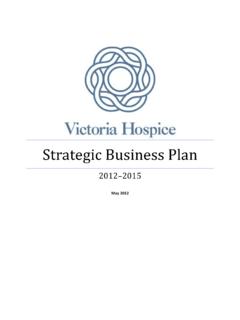 With the North America Technology Organization Sales Consulting (NATO) team as the pilot group for the Leadership Challenge Series, the … 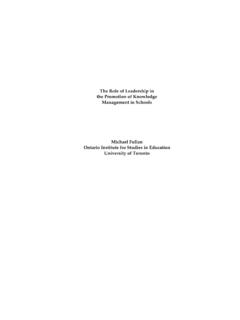 The Role of Leadership in the Promotion of …