May 2013 . LG Leader Contents Outstanding Rates: why avoid section 184? 2. Orders issued requiring unauthorised development to be demolished City of Mount Gambier v Waye [2012] SAERDC 66 3. Elected member participation in section 41 Committees 3. Planning law reform gathers momentum Parliament wrap-up 4. Conflict of Interest: A Continually Evolving Issue 5. Setting the Record Straight: Continuing Offences for Failing to Register a Dog 5. Contact List 6. CONTACT. T: (08) 8113 7100 Address Postal Address F: (08) 8113 7199 Level 6, 19 Gilles St GPO Box 2024. E: Adelaide SA 5000 Adelaide SA 5001. Kelledy Jones Lawyers Outstanding Rates: why avoid section 184? Natasha Jones Some Council's appear to be avoiding the use of section 184 of on a process under section 184, the reasons in favour of relying the Local Government Act 1999 to recover outstanding rates. on it can, in many circumstances, be said to outweigh any reason for avoiding the use of it.

1 May 2013 . LG Leader Contents Outstanding Rates: why avoid section 184? 2. Orders issued requiring unauthorised development to be demolished City of Mount Gambier v Waye [2012] SAERDC 66 3. Elected member participation in section 41 Committees 3. Planning law reform gathers momentum Parliament wrap-up 4. Conflict of Interest: A Continually Evolving Issue 5. Setting the Record Straight: Continuing Offences for Failing to Register a Dog 5. Contact List 6. CONTACT. T: (08) 8113 7100 Address Postal Address F: (08) 8113 7199 Level 6, 19 Gilles St GPO Box 2024. E: Adelaide SA 5000 Adelaide SA 5001. Kelledy Jones Lawyers Outstanding Rates: why avoid section 184? Natasha Jones Some Council's appear to be avoiding the use of section 184 of on a process under section 184, the reasons in favour of relying the Local Government Act 1999 to recover outstanding rates. on it can, in many circumstances, be said to outweigh any reason for avoiding the use of it.

2 This is because: Generally, the reason is because the sale of a property is considered to be an extreme approach and not the right thing to 1. money to pay outstanding rates can be recovered;. do by a public authority. This also includes concerns that the Council could be viewed as callous and harsh in its dealings with 2. it can reduce the Council's outstanding rate liability;. rate debtors. 3. the commencement of the formal process can achieve 1 positive results by the receipt of outstanding rates Given Council rate revenue accounts for approximately 68% of without the need to proceed to a formal sale;. total revenue to fund Council services, activities, infrastructure and projects, it is important that a Council does not allow its 4. the Council is entitled to recover costs at two different outstanding rates liability to reach a significant level where it stages throughout the process;. impacts available resources and affects service levels.

3 Regardless of the level of outstanding rates, it is important that 5. the assessment record can be tidied' by the sale of land Council's use appropriate methods to ensure that costs incurred where the principal ratepayer has been deceased for a during the process can be recovered. Section 184 is one such considerable period of time or where the valuation of the appropriate method. land does not exceed the amount of outstanding rates;. and Section 184 of the Act provides councils with the power to sell land for the non-payment of rates that are outstanding for 3 6. it provides opportunity for the Council to tell a good years or more. This power can be used in circumstances where: news story and share with the remainder of its ratepayer base that it is taking action against recalcitrant the land is owner/occupied or occupied by a tenant; ratepayers. the land is vacant; The above demonstrates just some of the reasons why section 184 should be relied upon rather than avoided.

4 Further, there is the principal ratepayer cannot be located; probably no doubt that the balance of the ratepayer base which is funding and meeting the rates liability would not be too taken the principal ratepayer is deceased; by the Good Samaritan role that a Council may take in such circumstances. the Council has no reasonable prospect of selling the land within a reasonable time; or By the way, I have been advised to pay my income tax bill this year and not rely upon the Good Samaritan' approach of the the current valuation is less than the amount of outstanding ATO! rates to enable the land to be transferred to the Crown or to the Council. 1. Local Government Association Website ( 2013 ), Resourcing Council Services Council Rates.. So whilst there may be exceptional circumstances and good reasons where it may be socially and morally inequitable to rely EHA Conference Dinner 2. Orders issued requiring unauthorised development to be demolished City of Mount Gambier v Waye [2012] SAERDC 66.

5 Joanna Oborne This recent decision from the ERD Court has highlighted the Therefore, although the Council was able to issue Court's willingness, in appropriate circumstances, to order Development Plan consent in respect of the Structure, it was the demolition of unauthorised development. not able to assess it for Building Rules consent. Furthermore, it was the Council's opinion that the Structure did not comply In this case, the respondent, Mr Waye, had constructed a with the Building Rules and that it was unsafe. carport/garage ( the Structure ) on his land without first obtaining development approval from the Council. In all of these circumstances, the Court held that it was appropriate that Mr Waye be ordered to remove the The Council became aware of the Structure during its Structure, especially given its potential to cause injury to a construction and repeatedly advised Mr Waye of his need to person entering and/or using the Structure.

6 Obtain development approval in respect of it. Despite this, Mr Waye continued to construct the Structure, and did not lodge This case, especially when read together with other a development application with the Council. judgments from the ERD Court over the past 12 months in which it has ordered convictions and substantial fines (in the Accordingly, the Council commenced proceedings against Mr order of $10,000) be imposed in respect of other matters Waye in the ERD Court, under Section 85 of the Development involving unauthorised development (see, for example, Act 1993 ( the Act ), seeking orders from the Court that the Corporation of the City of Port Augusta v Quality Roofing Structure be demolished. Services Pty Ltd [2012] SAERDC 67; City of Salisbury v Rocca (No. 2) [2010] SAERDC 11), signify the willingness of the Court Although Mr Waye did, once the proceedings were to avail itself of the range of enforcement powers granted to commenced against him, apply for development approval, he it under the Act, where the circumstances of the matter so repeatedly refused to answer a request for further require.

7 Information from the Council, which was required in order for it to assess the application against the Building Rules. Elected member participation in section 41. Committees Lisa Cameron Section 41 of the Local Government Act 1999 allows for the having not been formally appointed as a committee establishment of committees to assist Council in the member. The answer is simple in that an elected member, performance of its functions, or in a manner as determined who is not a formally appointed committee member has no by council. This includes making enquiry into and reporting more right than a member of the public as concerns the on matters that fall within councils' responsibility, providing attendance at and participation in, the business of the advice or exercising, performing or discharging delegated committee. powers, functions or duties of council. Membership of a section 41 committee is determined by council upon the If elected members could include themselves in committee establishment of the committee and can consist of both meetings on a whim, transparency and fairness of elected members and/or persons who are not members of committee meetings could be put to question and the council.

8 Community confidence in the deliberations undertaken at such meetings would be eroded. The question arises as to the rights of elected members to attend at meetings of a section 41 committee and to participate in the business of the committee, despite 3. Planning law reform gathers momentum . Parliament wrap-up Victoria Shute Following on from a series of significant law reforms passed Commission, which oversees the development of a number in 2012 and the announcement of the Planning Improvement of specified areas in WA. The main reforms proposed by this Project in February this year, a number of Bills proposing Bill which are relevant to local government are: further planning law reforms are progressing through Parliament. the Minister will, after consultation with the affected council or councils as well as DPAC and, in some Two of the Bills currently before Parliament were introduced circumstances, the DAC, be able to establish a by Mark Parnell MLC the Development (Interim precinct.)

9 Development Control) Amendment Bill and the Development (Development Plan Amendments) (Notification) Bill. the Minister will appoint a precinct authority , being Renewal SA or a council which: The Interim Development Control Bill passed the Legislative Council and was introduced into the House of Assembly on o may appoint panels to provide advice on planning 21 March 2013 . This Bill proposes to amend section 28 of and development within the precinct; and the Development Act 1993 ( the Act ) so that the Minister's power to declare Development Plan Amendments to o must prepare and maintain a masterplan for commence interim operation will only be able to be precinct, and precinct implementation plans exercised where it is necessary to counter applications for ( PIP's ) which can apply to parts of the precinct, undesirable development ahead of the outcome of the as well as the precinct as a whole;. consideration of the amendment.

10 Debate on this Bill is expected to continue prior to Parliament's winter break. once a PIP is implemented (which can only occur after public consultation), development applications which The DPA Notification Bill was introduced into the Legislative are certified by the authority as being consistent with a Council in April and proposes to amend sections 25 and 26 of PIP must be processed as complying developments the Act such that the written notice of a DPA must be given and, where relevant, land division consent conditions to owners and occupiers of land directly subject to a DPA or and open space requirements must be taken as having adjacent to land which is directly subject to a DPA, been fulfilled;. regardless of whether Process A, B or C is undertaken in regards to a DPA. Currently, the notice requirement only PIP details can be incorporated into Development Plans applies to DPA's undertaken in accordance with Process C. 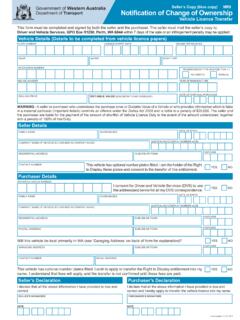