Medical Errors and Patient Safety . Reviewed June 2018, Expires June, 2020. Provider Information and Specifics available on our Website Unauthorized Distribution Prohibited 2018 , , , LLC. By Wanda Lockwood, RN, BA, MA. \. Purpose The purpose of this course is to explain issues related to Medical Errors and Patient Safety concerns, including regulations, causes of Errors , root cause analysis, types of Errors , and methods to avoid Errors . Goals Upon completion of this course, one should be able to: Discuss goals and regulations related to Medical Errors . Explain changes to Medicare-Medicaid reimbursement for preventable Errors . Explain 2 different types of root cause analysis. Explain how Failure Mode and Effects Analysis (FMEA) differs from other forms of root cause analysis. List and discuss 8 causes of Medical Errors . Explain the steps to identification of patients . Discuss issues related to handwriting. Explain procedures for verbal/telephone orders and reporting and hands- off communication.

1 Medical Errors and Patient Safety . Reviewed June 2018, Expires June, 2020. Provider Information and Specifics available on our Website Unauthorized Distribution Prohibited 2018 , , , LLC. By Wanda Lockwood, RN, BA, MA. \. Purpose The purpose of this course is to explain issues related to Medical Errors and Patient Safety concerns, including regulations, causes of Errors , root cause analysis, types of Errors , and methods to avoid Errors . Goals Upon completion of this course, one should be able to: Discuss goals and regulations related to Medical Errors . Explain changes to Medicare-Medicaid reimbursement for preventable Errors . Explain 2 different types of root cause analysis. Explain how Failure Mode and Effects Analysis (FMEA) differs from other forms of root cause analysis. List and discuss 8 causes of Medical Errors . Explain the steps to identification of patients . Discuss issues related to handwriting. Explain procedures for verbal/telephone orders and reporting and hands- off communication.

2 List and explain the 5 rights of medication administration. Explain at least 4 methods of prevent wrong-route Errors . List at least 5 items from the do-not-use list of abbreviations. Explain the difference among critical tests, critical results, and subsets of critical results. Explain the 3 steps to prevent wrong site, wrong procedure, and wrong person surgery Errors . Explain handwashing and alcohol rub techniques for control of nosocomial infections. Introduction The extent of Medical error was brought to the attention of the general public in 1999 with the Institute of Medicine's (IOM's) report To Err is Human. The study found that over half of the adverse events at two major hospitals related to Medical Errors . It went on in chilling detail, describing people who had died from mistakes, had the wrong limbs amputated, or suffered serious health crises. The Joint Commission defines Medical error as An unintended act (either of omission or commission) or one that does not achieve its intended outcome.

3 Some Medical Errors are caused by true accidents, but most are caused by Errors , such as failing to follow a standard of care. Unfortunately, many Errors are systematic and related to ineffective processes, such as a failure in communication or insufficient staffing, making it difficult to pinpoint responsibility. Further compounding the problem is that many malpractice insurance policies explicitly state that the insured should make NO admission of liability, despite this being directly counter to Medical ethics. (In response to this, some states have passed legislation that explicitly states that saying I'm sorry is not an admission of negligence.) Medical Errors can be frightening for patients , but those who commit Errors may be very shaken by the experience, feeling guilty and fearful of losing their jobs, losing respect of others, and being sued. Goals and regulations There is a growing consensus that Medical Errors must and CAN be controlled and increasing regulations requiring that they be reported.

4 The Joint Commission has issued the 2008 National Patient Safety Goals, providing strict standards to improve Patient Safety and reduce Medical Errors . Link: Joint Commission 2008 National Patient Safety Goals It's important to realize that these Safety goals are those that are used as part of accreditation assessment in an effort to reduce Medical Errors , but they do not cover all potential Errors . Procedures are in place for reporting of sentinel events (unexpected events not related to a Patient 's condition, such as death or serious injury), and compliance with Safety goals is assessed during accreditation. The Federal Center for Medicaid and Medicare Services has issued a new rule that will take effect October 2008. Under this rule, hospitals will not be reimbursed for treatment related to preventable conditions, such as those related to Medical error or improper care. Additionally, the costs cannot be conferred upon the Patient , so institutions must absorb the costs related to Medical Errors .

5 This provides a strong motivating force for compliance. Medicare payments have been based on diagnosis-related groups (DRGs), but institutions can apply for a higher reimbursement rate if complications occur. Thus, institutions that increased infection rates or complications received higher reimbursement and those that decreased infection rates also decreased profits not exactly a motivation to improve care. Eight secondary conditions have been identified as no longer qualifying for additional payments because they are preventable: Preventable complication Incidence/. 2006. Object left in during surgery 764. Air embolism 45. Blood incompatibility 33. Catheter-associated urinary tract infection 11,780. Pressure ulcer 322,946. Vascular-catheter-associated infection No data Mediastinitis after coronary artery bypass grafting 108. Fall from bed 2591. This change in reimbursement cancels the monetary advantage of providing poor care to some degree although the changes are not so clear because when costs substantially exceed the DRG, reaching a threshold amount, Medicare will still provide higher reimbursement.

6 However, the real impetus is related to knowing that this is the beginning step in making organizations accountable, not the last step. While awaiting federal action, some states have enacted their own regulations to improve Safety , and some now require reporting of hospital-acquired infections and/or reporting of MRSA infections, and 25 states currently require mandatory reporting of Medical event reporting rules and statutes for all states that include some type of mandatory reporting are available at the National Academy for State Health Policy. There is an alphabetical listing of states with links to rules and statutes: National Academy for State Health Policy, state links Florida is a good example of government and public concerns spurring legislation, sometimes at odds with each other. In 2004, the Florida Legislature passed cutting-edge legislation requiring that information about Patient outcomes, such as mortality rates and infection rates, be made public and that patients be notified when they were involved in an adverse event.

7 It also mandated Patient Safety education for healthcare providers. Florida set up the Florida Patient Safety Corporation, which established a voluntary reporting system for near-misses, assuring anonymity, which most authorities believe is essential to honest reporting. However, in 2004, voters approved two amendments backed by the Florida Trial Attorneys: Patient 's Right to Know about Adverse Medical Incidents Act (Amendment 7), which allows patients access to all records about their care (including previously protected peer review findings). Three Strikes and You Are Out Act (Amendment 8), which provides for revocation of license to practice for physicians with 3 adjudicated malpractice suits. While the legislature has made some modifications trying to align the different regulations, the result has been an increase in out-of-court settlements because physicians fear losing a judgment and endangering their licenses, and a marked decrease in reporting of Medical Errors because anonymity is not protected.

8 Currently, Medical Errors must be reported (Code 15 report) to the state within 15. days. Monthly and annual reports of adverse events (deaths, injury) are available online. Link: Florida Risk Management Data Florida's Amendment 7 is also at odds with the federal Patient Safety and Quality Improvement Act (2005), which established a national database for reporting of voluntary information about Medical Errors in order to develop more effective Safety measures. This act ensures confidentiality. The need for clear national policy is evident. Root cause analysis Root cause analysis (RCA) is a method used to determine the cause of an adverse event, such as a sentinel event (unexpected death, clustered adverse events). RCA is an integral part of reducing Medical error. Because RCA is retrospective, it requires interviews with those involved, questionnaires, observations of processes and procedures, and Medical record review. Every step in a process or procedure may be traced, focusing on why and how things are done rather than on the individuals who are carrying out the processes.

9 Usually RCA includes a review of literature and study of best practices to determine the best solutions to the problems discovered through the RCA when developing an action plan. An action plan to solve a problem without RCA may be ineffective. If, for example, contaminated airflow has caused surgical infections, altering the method of disinfecting the surgical suite will not decrease infections. There are a variety of alternative methods that may be used to conduct RCA: 5 Whys: This method, originally used by Toyota in Japan, utilizes a team with knowledge of the process to be analyzed. The team asks a series of at least 5 Why? questions to reach consensus as to why a problem arose. It begins with a complete detailed outline of a procedure or process and then questions about each separate step: o Why did the Patient take an overdose of medication? Because she didn't understand the directions. o Why didn't she understand the directions? Because she couldn't read English.

10 O And so on . Is Is not:This method attempts to identify root cause by evaluating a problem in terms of what it is and is not. A 2-column table with the problem listed at the top is created. One column heading is Is and the other column heading is Is not.. o Is:A detailed description of the problem is identified through the asking of information questions about the process. o Is not: This identified alls those factors/event that MIGHT have caused the same problem but did not. o The two lists are then examined to determine what differentiates them in order to determine root cause. Failure mode and effects analysis (FMEA): This RCA is different from the others because it is done prospectively instead of retrospectively. That is, when a new process or procedure is proposed, the FMEA is done to determine all possible problems/failures that may arise and to correct processes in advance. This is a form of risk assessment that involves creating a very detailed flow chart of a process/procedure and then brainstorming every step and sub-step for potential problems, asking What could go wrong?

Medical Record Documentation and Legal Aspects WWW.RN.ORG® Reviewed May, 2017, Expires May, 2019 Provider Information and Specifics available on our Website

Patient’s Rights and Responsibilities WWW.RN.ORG® Reviewed May, 2016, Expires May, 2018 Provider Information and Specifics available on our Website Unauthorized Distribution Prohibited

Cultural Competence in Healthcare WWW.RN.ORG® Reviewed May, 2017, Expires May, 2019 Provider Information and Specifics available on our Website 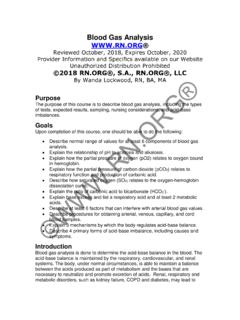 OSHA Regulations and Bloodborne Pathogens WWW.RN.ORG® Reviewed May, 2016, Expires May, 2018 Provider Information and Specifics available on our Website 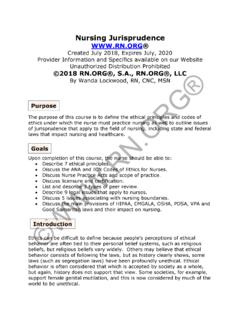 may be included in the Nurse Practice Act. Scope of practice: The basic scope of practice is the same for all registered nurses, and this includes the provision of

Medical Record Documentation for Patient Safety and Physician Defensibility is a publication of the MIEC Loss Prevention Department. The authors

Arizona Association for Home Care 2011 Conference -Friday Session www.azhomecare.org 3 Quality and Continuity of Care Š Clinical documentation should begin with a complete assessment and evaluation of the patient. Clinicians must record all details of their evaluation, clearly establishing he patient’s condition upon 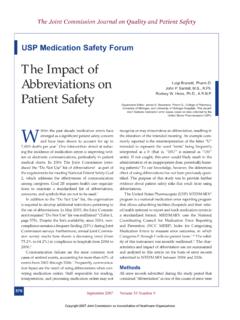 The Impact of Abbreviations on Patient Safety

September 2007 Volume 33 Number 9 577 The Joint Commission Journal on Quality and Patient Safety identified and exported to a worksheet format. 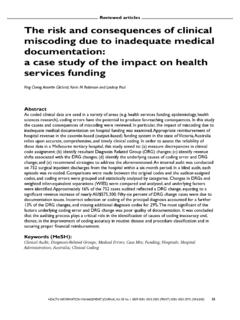 Reviewed articles The risk and consequences of …