Meeting of the OECD Council at Ministerial Level …

Meeting of the OECD Council at Ministerial Level Paris, 25-26 May 2011. Report on the Gender Initiative: Gender Equality in Education, OECD Paris Employment and Entrepreneurship 2, rue Andr -Pascal, 75775 Paris Cedex 16. Tel.: 33 (0) 1 45 24 82 00. EXECUTIVE SUMMARY. The 2011 Meeting of the OECD Council at Ministerial Level is the first milestone in the Gender Initiative, which was launched by the OECD to help governments promote gender equality in Education, Employment and Entrepreneurship (the three Es ). Reducing persistent gender inequalities is necessary not only for reasons of fairness and equity but also out of economic necessity.

2 EXECUTIVE SUMMARY The 2011 Meeting of the OECD Council at Ministerial level is the first milestone in the Gender Initiative, which was launched by the OECD to help governments promote gender equality in Education,

1 Meeting of the OECD Council at Ministerial Level Paris, 25-26 May 2011. Report on the Gender Initiative: Gender Equality in Education, OECD Paris Employment and Entrepreneurship 2, rue Andr -Pascal, 75775 Paris Cedex 16. Tel.: 33 (0) 1 45 24 82 00. EXECUTIVE SUMMARY. The 2011 Meeting of the OECD Council at Ministerial Level is the first milestone in the Gender Initiative, which was launched by the OECD to help governments promote gender equality in Education, Employment and Entrepreneurship (the three Es ). Reducing persistent gender inequalities is necessary not only for reasons of fairness and equity but also out of economic necessity.

2 Greater economic opportunities for women will help to increase labour productivity, and higher female employment will widen the base of taxpayers and contributors to social protection systems which will come under increasing pressure due to population ageing. More gender diversity would help promote innovation and competitiveness in business. Greater economic empowerment of women and greater gender equality in leadership are key components of the OECD's wider agenda to develop policies for stronger, better and fairer growth. Promoting gender equality in education Investing in formal education is essential to promote equality of employment opportunities and strengthen economic growth.

3 It increases cognitive and non-cognitive skills, it improves productivity and it provides individuals with a greater ability to further develop their knowledge and skills throughout their lives. Increased education participation is also associated with better health, and more investments in the education and health of children especially among women and particularly in developing countries. Gender equality in terms of participation in, and attainment of, education has been achieved in most OECD countries: girls have on average better grades and often outnumber boys among new college graduates.

4 However, in many developing countries, girls still have poorer educational attainments, especially at the secondary and tertiary levels. Achieving gender equality in education in these countries will not only promote greater equality in employment outcomes but also help postpone early-marriages, reduce infant mortality rates and improve health and education of future generations. Gaps in cognitive skills of boys and girls around age 15 are similar across countries: boys perform better than girls in mathematics in most countries, and girls outperform boys in reading in all countries.

5 In terms of science literacy, there are no significant gender differences. But young women are much less likely than young men to choose Science, Technology, Engineering, or Mathematics (STEM) as field of study at graduate Level ; the share of women in these fields further declines at the post-graduate Level . Gender differences in educational choices appear to be related to student attitudes (motivation, interest) in studying a particular subject rather than their ability and school performance. Gender gaps in performance are smaller than gender gaps in fields of tertiary study, indicating that young women often do not translate their good school performance into field of studies for higher education that offer better employment prospects, such as STEM studies.

6 Furthermore, even when women complete STEM studies they are less likely than men to work in these sectors. While it is difficult to separate innate and learned behaviours and to assess the influence of stereotypes, the effect of this gender imbalance is very clear. It hinders women's careers, it lowers their future earnings levels and deprives OECD economies of a source of talent and innovation. It is also an inefficient use of investment in education. 2. Policy lessons to improve gender equality in education Selected lessons for OECD countries Selected lessons for developing countries Adopt policies to address stereotyping in education Increase female enrolment and completion rates in and training choices.

7 Secondary education through a range of measures, Encourage parents and teachers to raise self- including: confidence and motivation among girls to pursue Reducing user fees, providing school materials, interests in science and mathematics. uniforms and meals, making (travel to) schools safer for Gear curricula, teaching material and training policies to girls ( through safe transport, the provision of avoiding gender stereo-typing, and encourage girls to restrooms and training of teachers). engage in STEM-studies. Making cash transfers to poor families conditional on A better balance in the gender composition of teachers them investing in the education and health of their and the endorsement of female role models in children.

8 Professions typically dominated by men might also Effective policies need to be multifaceted because contribute to this objective. infrastructure, health issues, laws, social norms and Support research to further explore which factors shape cultural practices can also influence the ability of girls to gender differences in the choice of field of study. attend and complete school. Attention should be paid to maintaining and improving the performance of boys so that they are not left behind, which is a phenomenon increasingly observed in some OECD countries. Enhance the quality of education and efficient Integrate financial education in schools to equip boys management of resources to improve educational and girls with financial knowledge.

9 Outcomes for both girls and boys. Support the design and implementation of specific The quality of teaching appears to be especially financial education programmes for men and women important for student performance. (and particularly vulnerable groups) to enhance their Level of confidence and knowledge on financial issues, to encourage higher savings and to improve the quality of their investments in order to promote a financially secure retirement and to improve their ability to participate more dynamically in economic activities. Promoting gender equality in employment In the past few decades, women have been entering the labour force in greater numbers and have been staying employed longer over their life course.

10 Increased educational attainment rates amongst women have contributed to greater employment rates, better earnings and career progression in many OECD and non-OECD countries. Nowadays, in OECD countries new female entrants in the labour market have comparable and often higher education than their male counterparts. Yet, compared to men, they are less likely to work for pay, more likely to be employed in lower-paid occupation and sectors, and more likely to have temporary employment contracts. Compared to men, employed women also work fewer hours, are less likely to progress in their careers and are under- represented in decision-making positions.

social and economic development - Food and …

Unasylva 237, Vol. 62, 2011 11 social and economic development In senegal and other savannah areas of sub-saharan Africa, baobab …

Economic Justice for All - usccb.org 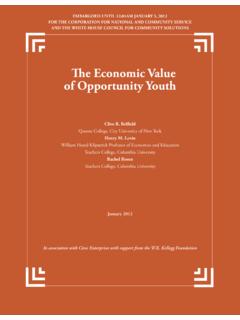 The Economic Value of Opportunity Youth | 1 SuMMaRY I n their early adult years, it is important for youth to gain additional skills through further educational, training, Global Agenda Council on the Future of Software & …