Memories Are Made of This - Simon Aronson's …

2 40. Appendix B - The Aronson 2009 Bonus - Shuffle Tracking - by Simon Simon Aronson - Page 3. Memories Are made Of this Introduction The card conjurer's repertory is never complete without employing the prearranged deck to some extent.. S. W. Erdnase [Note (May 2002): this pamphlet was originally written approximately three years ago, for use in some private workshops I conducted on memorized deck magic . Since that time much has happened to make the use of a memorized stack even more popular. Last year I published my book, Try the Impossible, which contains an in-depth exploration of the Aronson stack, plus two of the tricks that were contained in the original version of these notes. I also now have a website, at , which allows me to share my ideas about magic generally, and about memorized deck magic in particular, on a more current basis over the internet.]

3 I've revised these notes in just a few minor respects, to update the references, correct any errors that have been brought to my attention, and in only a few places to clarify or expand on the ideas presented.]. An awful lot has changed over the past twenty or so years. When I wrote my first book (The Card Ideas of Simon Aronson, 1978), I tipped my mitt on a lot of underground stuff that I had developed, using the memorized deck. In my introductory essay Simon Aronson - Page 4. Memories Are made Of this to that chapter, I mentioned that I sometimes felt guiltily pleased that so few of our advanced cardicians had (at that time) ever considered using the memorized deck. Well, I can't feel such guilt any longer because the memorized deck has certainly come of age.

4 Indeed, the past few years have seen a groundswell of interest in this venerable tool among some of the world's most respected magical thinkers and performers. Lecturers at magic clubs around the country have showcased memorized deck miracles. But the enthusiasm is not limited just to the professionals. In magic chat rooms on the Internet, and at magic conventions, I am regularly besieged by eager, inventive amateurs who want to show me their latest twist or accomplishment with a memorized deck and many are really good! The momentum is growing and contagious, and the sheer number of cardicians now using a memorized stack has produced a synergy that is causing the number of effects, tips, variations, and new principles to multiply exponentially.

5 I'm happy to have been part of the inspiration for this renaissance, but there's no reason to stop there. I'm constantly working on new memorized deck effects. So, it's about time that you joined the ranks also. About this Introduction As the title implies, the purpose of this booklet is simply to introduce you to some of the basic principles and applications you need to know to get started with a memorized deck. In Section I, I define a few of the basic terms, and answer some of the more frequently asked questions about how to approach the topic. In Section II, I try to give you a sense of the power and scope of the memorized deck by discussing five principles that are commonly used in memorized deck applications. These principles are illustrated with several simple, though quite fooling, location effects.

6 In Section III, I offer some thoughts on how one can best go about learning a memorized stack. At various points I refer to some of my favorite memorized miracles and to my books, so for convenience in looking up those references, I've included in Appendix A a current bibliography of all of my published writings on memorized deck magic . Finally, in Appendix B, I've set forth the Aronson stack, in case you want to learn it. I hope this brief introduction will make you feel more comfortable with, and will whet your appetite for further exploration of, memorized deck magic . Simon Aronson - Page 5. Memories Are made Of this Please understand what this Introduction is not. It's not a summary of everything there is to know about memorized decks; to the contrary, it barely scratches the surface.

7 It's also not a substitute for reading my books. I've been publishing material on the memorized deck since 1972. If you're familiar with my writings, you know that I'm usually quite detailed (my friends say exhaustive ) in discussing the underlying principles, tradeoffs, lead-ins and clean-ups, variations, credits and other references concerning each effect. this Introduction however, goes in the opposite direction the discussions are intentionally abbreviated, and are expressly meant to point you toward my books for further exploration and discussion of the material. (If you already have read all my books, you probably don't need this Introduction at all). Simon Aronson - Page 6. Memories Are made Of this I. Getting Started Simon Aronson - Page 7.

8 Memories Are made Of this Getting started So, what is a memorized deck (or, sometimes a memorized stack )? Quite simply, in current parlance among cardmen who actually perform memorized deck magic , a memorized deck means any specific ordering of the 52 playing cards, in which the position of each of the 52 cards (from 1 to 52) has been committed to memory. That's it. The key element is the phrase committed to memory. If you've really memorized the positions of all 52 cards, and if a deck is stacked in that particular memorized order, you'll be able to do two things: A. if someone names any number, from 1 to 52, then you will know instantly what card lies at that numbered position, and B. if someone names any playing card, then you'll know instantly at what numbered position that particular card lies in the deck.

9 That, in a nutshell, is all there is to a memorized deck, but a lot of wondrous possibilities flow from this one simple fact of memorization. And, likewise, the esoteric nature of memorized deck magic also becomes immediately apparent: the average magician who contemplates the supposed difficulty of memorizing 52. abstract numerical relationships, quickly dismisses this tool as being not worth his time or effort. (Many practitioners are secretly happy about that, but hopefully this Introduction will help you overcome any initial hesitancy or inertia). So let's examine the foregoing definition a bit more. Instantly means, in this case, without needing any formulas, calculations, or time to get from a position to a card or vice versa.

10 If someone calls out, say #38, you instinctively know it's the Ten of Hearts (or whatever particular card lies at position #38 in the particular deck order you've memorized), or if someone calls out, say, the Ace of Spades, then position #6 (or whatever) will immediately come to your conscious mind. It happens instantly, without mediation, or thought, or rules, or formulas, of any kind, because the 52 correlations of each Simon Aronson - Page 8. Memories Are made Of this specific card and its respective numerical position have previously been established in your memory. At the outset, this concept of learning the 52 cards by memory is what scares most beginners. Let me offer some encouragement that, at this stage, must simply be accepted on faith by any initiate.

Mind‑Power vi Epigraph “The universe is a great organism, controlled by a dynamism of the psychical order. Mind gleams through its every atom.… 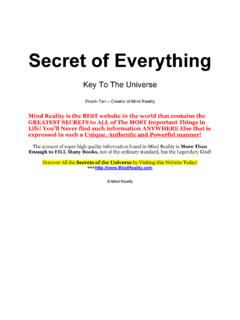 Secret of Everything - Mind Reality

4 Secret of Everything The secret of everything – Everything Is Mental. All talent, skill, power, speed and ability is mental. Nothing is impossible. 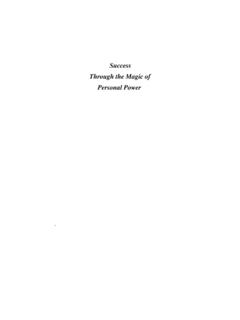 Success Through the Magic of Personal Power 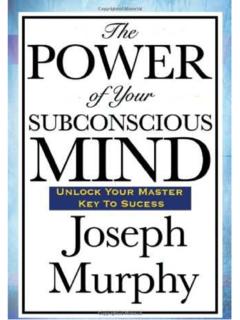 The POWER of Your Subconscious

2 The POWER of Your Subconscious Mind Joseph Murphy D.R.S., D.D., Ph.D., LL.D. Fellow of the Andhra Research University of India … 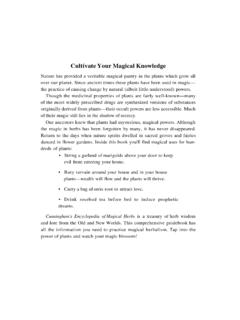 Cultivate Your Magical Knowledge Nature has provided a veritable magical pantry in the plants which grow all over our planet. Since ancient times these plants have been used in magic—

Techniques Of High Magic By Francis King and … 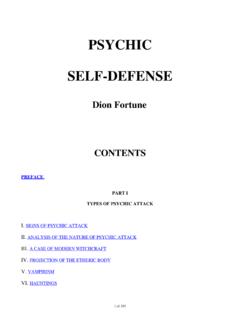 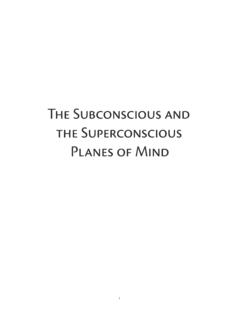 The Subconscious and the Superconscious Planes … 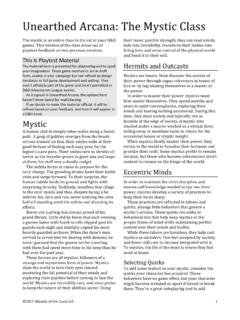 ©2017 Wizards of the Coast LLC 1 Unearthed Arcana: The Mystic Class The mystic is an entire class to try out in your D&D games. This version of the class arose out of