2 Prior to submission of those Model Rules to the Michigan Supreme Court, the State Bar of Michigan made minor changes in the Rules and the comments to conform them to Michigan law and preferred practice. The Supreme Court then adopted the Rules , with such substantive changes as appeared proper to the Court. Additional changes in the comments were then made by staff to conform the comments to the Rules as adopted by the Supreme Court. The Supreme Court has authorized publication of the comments as an aid to the reader, but the Rules alone comprise the Supreme Court's authoritative statement of a lawyer's ethical obligations. Preamble: A Lawyer's Responsibilities This preamble is part of the comment to Rule , and provides a general introduction to the Rules of Professional Conduct . A lawyer is a representative of clients, an officer of the legal system and a public citizen having special responsibility for the quality of justice. As a representative of clients, a lawyer performs various functions.

3 As advisor, a lawyer provides a client with an informed understanding of the client's legal rights and obligations and explains their practical implications. As advocate, a lawyer zealously asserts the client's position under the Rules of the adversary system. As negotiator, a lawyer seeks a result advantageous to the client but consistent with requirements of honest dealing with others. As intermediary between clients, a lawyer seeks to reconcile their divergent interests as an advisor and, to a limited extent, as a spokesperson for each client. A lawyer acts as evaluator by examining a client's legal affairs and reporting about them to the client or to others. In all Professional functions a lawyer should be competent, prompt and diligent. A. lawyer should maintain communication with a client concerning the representation. Michigan Rules of Professional Conduct Last Updated 1/2/2018. A lawyer should keep in confidence information relating to representation of a client except so far as disclosure is required or permitted by the Rules of Professional Conduct or other law.

4 A lawyer's Conduct should conform to the requirements of the law, both in Professional service to clients and in the lawyer's business and personal affairs. A. lawyer should use the law's procedures only for legitimate purposes and not to harass or intimidate others. A lawyer should demonstrate respect for the legal system and for those who serve it, including judges, other lawyers and public officials. While it is a lawyer's duty, when necessary, to challenge the rectitude of official action, it is also a lawyer's duty to uphold legal process. As a public citizen, a lawyer should seek improvement of the law, the administration of justice and the quality of service rendered by the legal profession. As a member of a learned profession, a lawyer should cultivate knowledge of the law beyond its use for clients, employ that knowledge in reform of the law and work to strengthen legal education. A lawyer should be mindful of deficiencies in the administration of justice and of the fact that the poor, and sometimes persons who are not poor, cannot afford adequate legal assistance, and should therefore devote Professional time and civic influence in their behalf.

5 A lawyer should aid the legal profession in pursuing these objectives and should help the bar regulate itself in the public interest. Many of a lawyer's Professional responsibilities are prescribed in the Rules of Professional Conduct , as well as substantive and procedural law. However, a lawyer is also guided by personal conscience and the approbation of Professional peers. A. lawyer should strive to attain the highest level of skill, to improve the law and the legal profession and to exemplify the legal profession's ideals of public service. A lawyer's responsibilities as a representative of clients, an officer of the legal system, and a public citizen are usually harmonious. Thus, when an opposing party is well represented, a lawyer can be a zealous advocate on behalf of a client and at the same time assume that justice is being done. So also, a lawyer can be sure that preserving client confidences ordinarily serves the public interest because people are more likely to seek legal advice, and thereby heed their legal obligations, when they know their communications will be private.

6 In the nature of law practice, however, conflicting responsibilities are encountered. Virtually all difficult ethical problems arise from conflict between a lawyer's responsibilities to clients, to the legal system, and to the lawyer's own interest in remaining an upright person while earning a satisfactory living. The Rules of Professional Conduct prescribe terms for resolving such conflicts. Within the framework of these Rules many difficult issues of Professional discretion can arise. Such issues must be resolved through the exercise of sensitive Professional and moral judgment guided by the basic principles underlying the Rules . The legal profession is largely self-governing. Although other professions also have been granted powers of self-government, the legal profession is unique in this respect because of the close relationship between the profession and the processes of government and law enforcement. This connection is manifested in the fact that ultimate authority over the legal profession is vested largely in the courts.

7 Michigan Rules of Professional Conduct Last Updated 1/2/2018. To the extent that lawyers meet the obligations of their Professional calling, the occasion for government regulation is obviated. Self-regulation also helps maintain the legal profession's independence from government domination. An independent legal profession is an important force in preserving government under law, for abuse of legal authority is more readily challenged by a profession whose members are not dependent on government for the right to practice. The legal profession's relative autonomy carries with it special responsibilities of self-government. The profession has a responsibility to assure that its regulations are conceived in the public interest and not in furtherance of parochial or self- interested concerns of the bar. Every lawyer is responsible for observance of the Rules of Professional Conduct . A lawyer should also aid in securing their observance by other lawyers. Neglect of these responsibilities compromises the independence of the profession and the public interest which it serves.

8 Lawyers play a vital role in the preservation of society. The fulfillment of this role requires an understanding by lawyers of their relationship to our legal system. The Rules of Professional Conduct , when properly applied, serve to define that relationship. SCOPE. The Rules of Professional Conduct are Rules of reason. They should be interpreted with reference to the purposes of legal representation and of the law itself. Some of the Rules are imperatives, cast in the terms "shall" or "shall not." These define proper Conduct for purposes of Professional discipline. Others, generally cast in the term "may," are permissive and define areas under the Rules in which the lawyer has Professional discretion. No disciplinary action should be taken when the lawyer acts or chooses not to act within the bounds of such discretion. Other Rules define the nature of relationships between the lawyer and others. The Rules are thus partly obligatory and disciplinary and partly constitutive and descriptive in that they define a lawyer's Professional role.

9 Many of the comments use the term "should.". Comments do not add obligations to the Rules , but provide guidance for practicing in compliance with the Rules . The Rules presuppose a larger legal context shaping the lawyer's role. That context includes court Rules and statutes relating to matters of licensure, laws defining specific obligations of lawyers, and substantive and procedural law in general. Compliance with the Rules , as with all law in an open society, depends primarily upon understanding and voluntary compliance, secondarily upon reinforcement by peer and public opinion, and finally, when necessary, upon enforcement through disciplinary proceedings. The Rules do not, however, exhaust the moral and ethical considerations that should inform a lawyer, for no worthwhile human activity can be completely defined by legal Rules . The Rules simply provide a framework for the ethical practice of law. Furthermore, for purposes of determining the lawyer's authority and responsibility, principles of substantive law external to these Rules determine whether a client- lawyer relationship exists.

10 Most of the duties flowing from the client-lawyer relationship attach only after the client has requested the lawyer to render legal services and the lawyer has agreed to do so. But there are some duties, such as Michigan Rules of Professional Conduct Last Updated 1/2/2018. that of confidentiality under Rule , that may attach when the lawyer agrees to consider whether a client-lawyer relationship shall be established. Whether a client- lawyer relationship exists for any specific purpose can depend on the circumstances and may be a question of fact. Under various legal provisions, including constitutional, statutory and common-law, the responsibilities of government lawyers may include authority concerning legal matters that ordinarily reposes in the client in private client-lawyer relationships. For example, a lawyer for a government agency may have authority on behalf of the government to decide upon settlement or whether to appeal from an adverse judgment. Such authority in various respects is generally vested in the attorney general and the prosecuting attorney in state government, and their federal counterparts, and the same may be true of other government law officers. 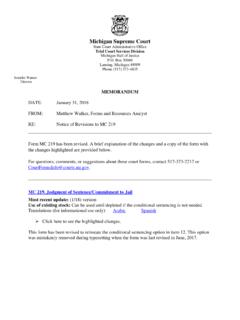 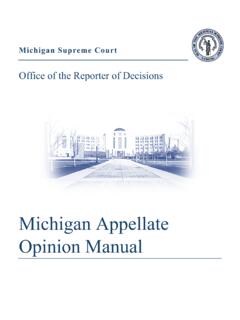 The Office of the Reporter of Decisions works closely with the ... Michigan Appeals Reports are ... The Michigan Appellate Opinion Manual sets forth those standards ... 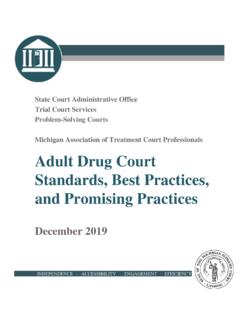 Michigan Court of Appeals - One Court of Justice

All contacts and documents you intend to file with the Court of Appeals must be made through one of the clerk’s offices listed below. You may use whichever is … 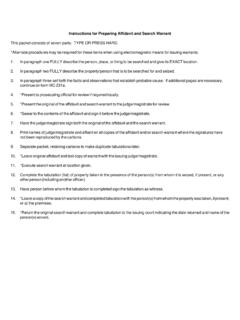 Instructions for Preparing Affidavit and Search …

Instructions for Preparing Affidavit and Search Warrant This packet consists of seven parts. TYPE OR PRESS HARD. *Alternate procedures may be required for these items when using electromagnetic means for issuing warrants. 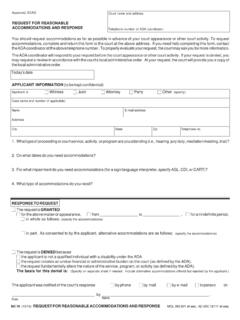 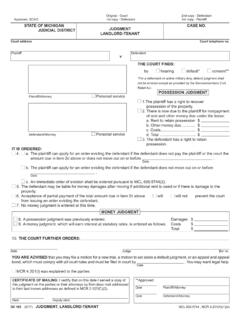 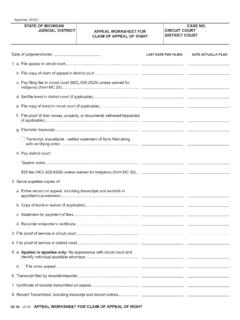 DC 54, Appeal Worksheet for Claim of Appeal of Right 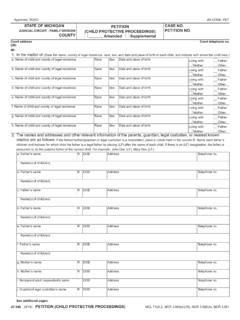 the active efforts made to provide remedial services and rehabilitative programs designed to prevent the breakup of the. Indian family and … 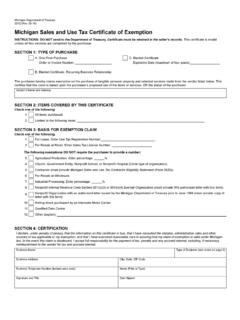 3372, Michigan Sales and Use Tax Certificate of … 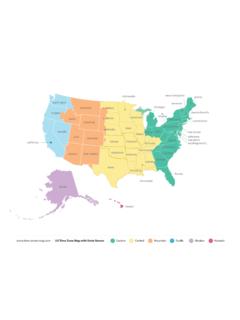