Name _____ Score _____/64. Microorganisms Test Multiple Choice 1. Which of the following CORRECTLY describes the size of fungi compared to the size of bacteria? A. Fungi are larger. B. Bacteria are larger. C. They are about the same size. D. They are the same size but different shapes. Use the diagram of the paramecium to answer questions #2 & #3. 2. What is the paramecium's body composed of? A. thousands of cells X. B. four cells C. one cell and its parts D. several body organ systems 3. What is the function of the cilia marked by X ? A. to move the paramecium B. to take in water and remove wastes C. to control cell division D.

Name _____ Score _____/64 Microorganisms Test Multiple Choice 1. Which of the following CORRECTLY describes the size of fungi …

1 Name _____ Score _____/64. Microorganisms Test Multiple Choice 1. Which of the following CORRECTLY describes the size of fungi compared to the size of bacteria? A. Fungi are larger. B. Bacteria are larger. C. They are about the same size. D. They are the same size but different shapes. Use the diagram of the paramecium to answer questions #2 & #3. 2. What is the paramecium's body composed of? A. thousands of cells X. B. four cells C. one cell and its parts D. several body organ systems 3. What is the function of the cilia marked by X ? A. to move the paramecium B. to take in water and remove wastes C. to control cell division D.

2 To make food from sunshine and air 4. Which of the following BEST describes where Microorganisms live? A. Underwater. B. In warm, humid places. C. Nearly everywhere D. Sunny, dry areas. The foods listed on this data table were left in plastic bags in a warm container for five days. Observations were made and recorded at the end of the experiment. Use this information to answer questions #5 thru # Food Observations for Five Days Bread Covered with black, fuzzy stuff Banana Banana turned slimy, black, and soft Hamburger Turned brown with green spots Cheese Has white and green areas 5. Which of these hypotheses might have been tested in this experiment?

3 A. Foods left in the dark will rot differently than foods in light. B. Will foods react differently to plastic bags? C. If different foods are decayed, they will not decay the same. D. What kind of bacteria is best for making cheese? 6. What variable was tested in this experiment? A. The length of time it takes for food to rot. B. What kind of bags allows rotting to occur? C. The temperature Microorganisms like best. D. How different kinds of food rot. 7. Which of the following is a conclusion you could make concerning these data? A. All foods rot when left in a warm place for 5 days. B. Bread is better for you to eat than cheese.

5 D. Little can be done to prevent disease. 10. Which of the following practices is based on an understanding of Microorganisms ? A. Walking downhill instead of running. B. Looking both ways before crossing a street. C. Wearing lightweight clothes in the summer. D. Washing your hands before eating. 11. What important function do Microorganisms have in an ecosystem? A. They produce food from sunlight. B. They reduce the number of large animals. C. They decompose dead organisms. D. They help to clean the air. 12. How does adding yeast change bread dough? A. Bubbles of gas form in the dough B. Yeast changes the breads' color.

6 C. More dough is produced as yeast multiply. D. Yeast makes it more less lumpy. 13. How do bacteria help our bodies' function? A. They make our muscles and lungs stronger B. They help to digest food in the intestines. C. They circulate in our blood and help carry oxygen. D. They make our skin flexible and clean. 14. Which of the following correctly pairs a microorganism with the disease it creates? A. protozoa-the flu C. bacteria-strep throat B. virus-athlete's foot D. fungi-a cold 15. Which statement is true of ALL bacteria? A. All bacteria are single-celled organisms. C. All bacteria have a cell with a nucleus. B. All bacteria are producers.

7 D. All bacteria live in water. Every morning Sara eats an orange. Her mother keeps a bowl of fruit on the kitchen table for the family. Sara has noticed that this summer, the oranges have a few spots with white powdery appearance and taste bitter. She wonders what is happening. 16. Using your knowledge of fungi, which of the following might prevent the mold from growing? A. Buy a different type of orange. C. Put the oranges in a warm place. B. Keep the oranges in the refrigerator. D. Put the oranges in a damp place. 17. What can many protozoa do that other Microorganisms cannot do? A. Speed the decay of dead organisms.

8 C. Produce waste products harmful to people. B. Depend on other organisms for food. D. Move by themselves. Matching Study the following drawings and then match the organism to its characteristic. PLEASE NOTE: There may be more than one answer per question. Answers may be used once, more than once, or not at all. Organism Characteristic _____ 1. Bacteria a. structures for movement b. simplest form _____ 2. fungi c. anchored in one spot d. observable nucleus _____ 3. algae e. some forms can be seen with our eyes only f. green in color _____ 4. protozoan g. observable nucleus h. producer Patient: Doctor, I think I need glasses.

9 Teller: You certainly do. This is a bank. True/False Correct (3 points each). Read the following statements. If it is true, circle T and go to the next questions. If the answer is false, circle F and CHANGE THE STATEMENT SO IT IS TRUE. T F 1. Algae are producers. T F 2. An example of a decomposer is fungi. T F 3. A consumer MAKES its own food. T F 4. Anton Van Leeuwenhoek is considered the father of the microscope. T F 5. An amoeba moves using pseudopods. T F 6. Three shapes of bacteria are round, rod, and spiral. T F 7. Bacteria help make foods like chocolate and cheese. T F 8. Fungi cause most crop disease. Matching, Part Deux _____ 1.

10 Algae A. Neither plant nor animals, but have characteristics of both and absorb food from whatever they are growing on. _____ 2. Bacteria B. Single-celled animal-like organism that lives in water. _____ 3. Conclusion C. Organism made up of only one cell. _____ 4. Control D. Living thing (like a plant) that makes its own food. _____ 5. Culture E. Living thing that can only be seen with the aid of magnification. _____ 6. Decomposer F. Idea that can be tested through an experiment. _____ 7. Fungi G. Summary of an experiment. _____ 8. Hypothesis H. Breaks down dead plant and animal matter. _____ 9. microorganism I. Part of an experiment that can be changed.

Bird Beaks Purpose In this activity, you will get a chance to find out how the shape of a bird’s beak helps decide what it can eat. Pretend you are a bird. 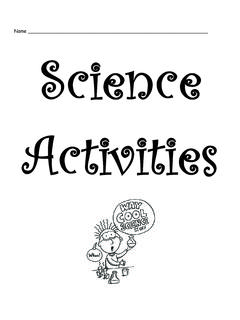 Required Vocabulary Analyze – Review the data from an experiment to find out what they mean. Assumption – Something that is believed to be true without proof. Compare – Look at to find similarities and differences.

- 3 - Constellations and the World’s Cultures Many cultures have identified star patterns, but rarely do these patterns correspond to those of other cultures. 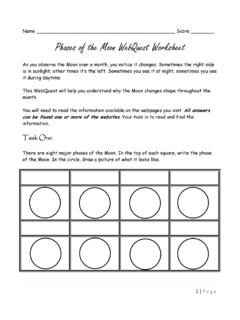 Phases of the Moon WebQuest Worksheet

1 | Page Name _____ Score _____ Phases of the Moon WebQuest Worksheet As you observe the Moon over a month, you notice it changes. 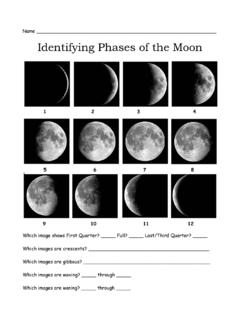 Name Identifying Phases of the Moon 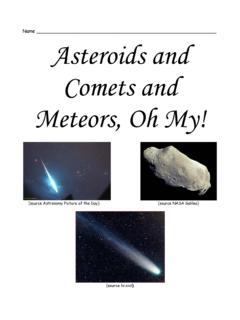 Name Asteroids and Comets and Meteors, Oh My! 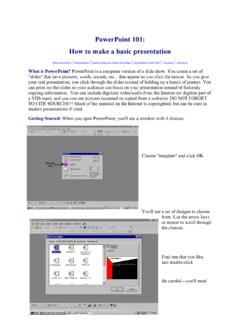 PowerPoint 101: How to make a basic presentation 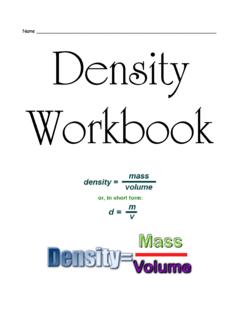 3 11. Drop a toy car in a graduated cylinder with 15mL of water. You look at the level after the car is in the cylinder and see that it is now 32mL.