2 28 Conclusion .. 29 Glossary .. 30 Works Cited .. 31 Migration and Globalization 2 Introduction Transnational flows of goods and capital have driven Globalization during recent years. These flows have been made possible by the gradual lowering of barriers to trade and investment across national borders, thus allowing for the expansion of the global economy. However, states have often firmly resisted applying similar deregulatory policies to the international movement of people. As noted by the World Bank in its report, Globalization , Growth, and Poverty, while countries have sought to promote integrated markets through liberalization of trade and investment, they have largely opposed liberalizing Migration policies.

3 Many countries maintain extensive legal barriers to prevent foreigners seeking work or residency from entering their national borders. In fact, immigration policies across the world are becoming stricter as governments attempt to minimize the economic, cultural, and security impacts of large movements of people between nations. Despite the reluctance of governments to liberalize immigration policy, however, the number of people living outside their countries of origin has risen from 120 million in 1990 to an estimated 215 million in 2012 (The World Bank, 2012), which is approximately percent of the world population. A 2009 study conducted by Gallup Polls across 135 countries reveals that 16 percent of the world s adult population would like to move permanently to another country if they had the chance.

4 However, these numbers seem to vary by region. According to polls taken from 2007 - 2009, 38 percent of sub-Saharan Africans want to migrate, while only 10 percent of Asians want to permanently leave their home country. The is the most desirable destination country, according to those polls (Espisova, Ray, 2009). A variety of reasons lie behind Migration . People may migrate in order to improve their economic situation, or to escape civil strife, persecution, and environmental disasters. Traditionally, the reasons encouraging an individual to migrate were categorized as "push" or "pull" factors. Globalization has introduced a third set of motivations called "network" factors, which include free flow of information, improved global communication and faster and lower cost transportation.

5 While network factors are not a direct cause of Migration , they do facilitate it. As well as encouraging Migration , Globalization also produces countervailing forces. For example, as businesses grow and become more internationalized they often outsource their production to developing countries where labor costs are lower. This movement of jobs from developed nations to the developing world mitigates certain economic factors leading to Migration . In other words, in a global economy jobs can move to potential migrants instead of migrants moving to potential jobs. The impacts of Migration are complex, bringing both benefits and disadvantages. Immigration provides a supply of low cost labor for host countries, while remittances from emigrant workers can be an important source of foreign income for sending nations.

6 On the other hand, immigration can stoke resentment and fear towards newcomers in receiving states, as immigrants are discriminated against, accused of lowering wages and associated with crime, among other complaints. For the economies of sending nations, emigration leads to a loss of young, able-bodied, well-educated and otherwise economically valuable citizens. This Issue in Depth is designed to help you understand the causes of Migration , the allocation of benefits, and the ways in which individual countries and the international community deal with this important subject. The Issue in Depth addresses primarily voluntary economic Migration , that is, migrants who relocate to a foreign country as temporary workers or legal Today, the number of people living outside their country of birth is larger than at any other time in history.

8 Ver one million people a year were drawn to the new world by the turn of the 20th century. A World Bank report, International Migration and the Global Economic Order, estimates that 10 percent of the world's population was migrating in this time period, whereas Migration today is around three percent. Growing prosperity, falling transport costs relative to wages, and lower risk all helped to facilitate this era of mass Migration . (A situation not unlike that of today) It was also at this earlier time that states developed a formal and regulated system of passports and visas to control the flow of people across national borders. The effects of the first era of Migration can be seen in the population compositions of many countries in the Western Hemisphere.

9 In the latter part of the 19th century, for example, nearly 15 percent of the population was foreign born, with the overwhelming majority of these immigrants arriving from Europe. Irish and Italian immigrants came in particularly large numbers, as did Russian and East European Jews, Czechs, Slovaks, Poles, and Germans. Most current citizens of European decent are a product of this period of immigration (O Rourke, 2001). At the same time that European emigration was surging during the 19th Century, Chinese and Japanese immigrants were arriving in large numbers to the West Coast of the and Hawaii (Richin, 1972). However, streams of Asian immigration to the were quickly halted by a series of restrictive policies targeting Chinese, Japanese and finally all Asian immigrants at the turn of the 20th Century (Daniels 1999).

10 Elsewhere in the Western Hemisphere, rapidly developing countries such as Argentina, Brazil, and Chile experienced large influxes of Spanish and Portuguese immigrants facilitated by the past colonial connection between their countries, but also received immigrants from Germany, Britain, Italy, Poland, China, and Japan (O Rourke, 2001). This wave of immigration to the New World resulted in moments of backlash against immigrants. In the , immigrants were blamed for crime, disease, and the persistence of poverty in the urban centers of the Northeast and Midwest. Furthermore, immigrants formed a large and restless population that seemed ripe for social conflict.

Culture and Globalization http://www.globalization101.org 3 better lives for the people in it." -- David Rothkopf, "In Praise of Cultural Imperialism," Foreign Policy ...

IMF and World Bank http://www.globalization101.org 5 The International Monetary Fund Governance, Organization and Purposes Governance The IMF is controlled by its 187 member-countries, each of whom appoints a representative to the IMF's Board of

Addressing Rural Youth Migration at its Root Causes: A ... 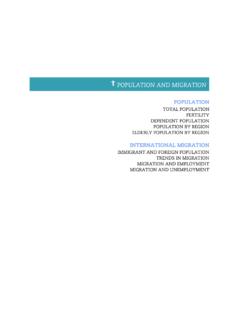 TOTAL POPULATION The size and growth of a country’s population are both causes and effects of economic and social developments. The pace of population growth has slowed in all OECD

4 THE CONTEXT Migration is a growing global phenomenon and most countries are simultaneously countries of origin, transit and destination for migrants. Conflicts, violence and natural disasters are among the root causes of migration 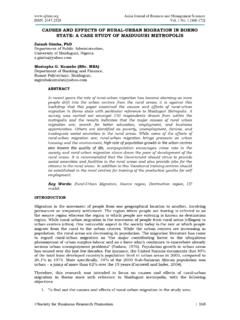 CAUSES AND EFFECTS OF RURAL-URBAN MIGRATION IN …

The phenomenon of migration - ifrc.org

medical services to migrants awaiting resettlement, integration assistance to returnees and basic health care for poor rural migrants. The first example of recognition and awareness of migration activities in the 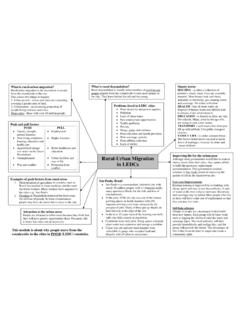 This module is about why people move from the countryside to the cities in POOR (LEDC) countries. Attraction to the urban areas People are attracted to urban areas because they think that

MIGRATION OF BISPHENOL A FROM POLY-CARBONATE …