Minutes for the Waterworks Board meeting held …

2 ROLL CALL, Chairman Gervasini noted that a quorum was present. ANNOUNCEMENT. OF QUORUM. 1. REQUESTS, COMMENTS, None PETITIONS BY MEMBER OF. THE PUBLIC. Board MEMBERS ITEMS Director Kaaz requested the Minutes include more Board OUTSIDE OF EXECUTIVE comments. SESSION. APPROVE Minutes OF Upon motion from Director Norris, seconded by Director Wood, OCTOBER 26, 2015 the motion was unanimously adopted .. RESOLVED (No. 14585) that the Board approved the October 26, 2015 Minutes . CONSIDERATION OF CONSENT Upon motion from Director Kaaz, seconded by Director Wood, AGENDA FOR: unanimously adopted . RESOLVED (No.)

4 B. The Regular Claims $250, , Special Claims B. PAYMENT OF CLAIMS $211, and Special/Special Claims as follows: KS- AWWA $ , YP $ , Ks Gas Service $ , and Westar Energy $33, , the checks be drawn on the Revenue Fund for their respective amounts. 2. PRESENTATION OF BLUE Lisa Torres our group consultant from Blue Cross Blue Shield CROSS/BLUE SHIELD HEALTH of Kansas presented the 2016 insurance renewal to the INSURANCE Board . The Water works department is grandfathered into a pool of small groups and our increase for next year is , which is based off the pools increase of and our demographic increase of 4%.

5 All employees were asked to complete new application to see if the underwriters would adjust the rate increase. Ms. Torres informed the Board this could be the last year for us to be in the small groups' pool and the new rates are based on location of the business, age and tobacco usage. Director Kaaz asked if BCBS has a vitality program. Ms. Torres stated that BCBS doesn't have one for small groups. CONSIDERATION OF PROJECT Linaweaver finished the project with no changes orders. The COMPLETION AND FINAL total contract price was $295, , they were previously PAYMENT FOR CHEYENNE STREET paid $238, and have submitted a final payment WATERLINE REPLACEMENT invoice of $57, Director Kaaz asked what happened to the valve at Choctaw and Esplanade Street.

6 Mr. Baragary answered the bottom broke out. Upon motion from Director Kaaz, seconded by Director Norris, the motion was unanimously adopted . RESOLVED (No. 14587) that the Board approved the final payment to Linaweaver in the amount of $57, CONSIDERATION OF PROJECT Westland Construction finished the Springdale Road Water COMPLETION AND FINAL main extension project and submitted the final invoice of PAYMENT FOR SPRINGDALE $4, ROAD MAIN EXTENSION (KDOT) Chairman Gervasini noted this amount was within the GM's authorization for approval. The consensus of the Board was to accept the project. CONSIDERATION OF HIPPO The Mobile Hydraulic Equipment Company 2042E power REPLACEMENT pack is a self-contained.

7 The unit is a diesel-engine driven power pack which provides air, electric, hydraulic and welding power for heavy duty power tools. The purchase price is $40, This would replace the existing hydraulic pump unit that is attached to the truck. Director Kaaz asked what will happen to the existing hippo unit and could it be list on the website Purple Wave for sale. Staff agreed they would do so after receipt of the new pack. 3. Upon motion from Director Wood, seconded by Director Norris, the motion was unanimously adopted . RESOLVED (No. 14588) that the Board approved the purchase of Hippo 2042E power pack in the amount of $40, PRESENTATION OF INTERNET BILL The Board reviewed two proposals for internet billing with PAY PROPOSALS several different options of payment.

8 Staff stated that both proposal were given to legal for review. Director Norris asked to have the references contacted. Director Kaaz asked for a summary sheet of both companies. Further review will be done after legal reviews the contracts. PRESENTATION OF BUDGET The proposed budget for fiscal year 2016 was presented to the Board . Summary Revenue Sales budgeted for a 5%. increase in water sales, assuming weather returns to normal , along with a one percent across the Board increase for water rates. Operating expenditures budgeted an increase of 2% unless a different adjustment is needed by line item.

9 An overall increase of resulted, which includes a 1% COLA increase for all employees and a 3%. merit increase available at the employees anniversary evaluation. Capital Improvement Projects (CIP) budgeted approximately $4,261,000, to include replacement of miles of pipeline and conversion of both plants from the use of gaseous chlorine to liquid chlorine as a disinfected, security measures, and major rehab projects. The Board asked several questions about the proposed budget. Director Kaaz asked if staff could be reduced when we convert to liquid CL2. Staff responded that not just by this conversion, the sand filters would need to be changed to membrane or other operational actions would need to be considered as well.

10 This project is primarily for safety of the public and the elimination of the risk management plan. Director Gervasini asked how long would it take for the switch and what happens to the existing equipment. Director Kaaz asked for a wage and benefit summary for all employees. The Board agreed to review the budget further and have more questions at the next meeting . STAFF REPORTS Administration On October 29th met with BCBS to discuss 2016 health insurance 4. renewal. Web based billing proposals to legal for review. Distribution and Engineering Water Distribution Summary 1. Columbia-Spruce to Michigan, Spruce-Columbia to Broadway Nothing new. 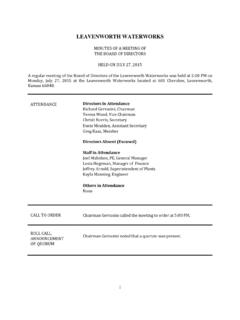 Minutes for the Waterworks Board meeting held …

2 requests, comments, petitions by member of the public none board members items outside of executive session none approve minutes of june 22, 2015 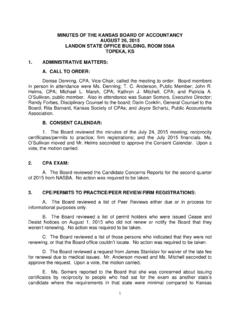 MINUTES OF THE KANSAS BOARD OF …

1 minutes of the kansas board of accountancy august 26, 2015 landon state office building, room 556a topeka, ks 1. administrative matters: a. call to order:

Kansas, Board, Minutes, Minutes of the kansas board of

Guidelines for Trust Audits The objective of these guidelines is to assist the board of irectors, trust management and auditors in d establishing the appropriate scope and extent of audit procedures that would provide conformance with K.A.R. 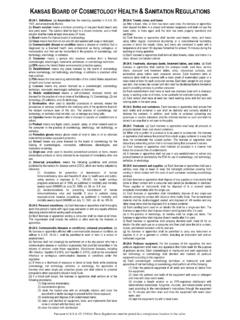 KANSAS BOARD OF COSMETOLOGY HEALTH & SANITATION REGULATIONS Pursuant to K.S.A. 65-1906(b) These Regulations must be posted in …

Kansas, Board, Kansas board

Minimum Number of Minutes or Hours in …

Certification of Voluntary and Informed Consent … 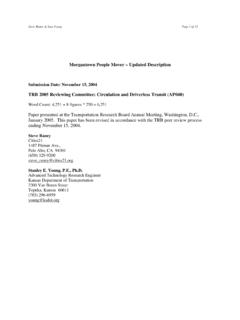 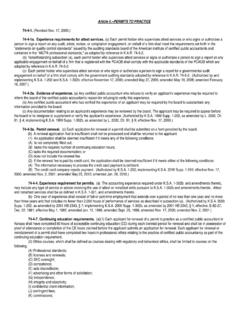 Minutes of the kansas board of, Trust Audit Guidelines, Kansas, Board, KANSAS BOARD, Minimum Number of Minutes or Hours in, Certification of, Morgantown