MINUTES of the Board of Trustees of the - SURS

MINUTES. Meeting of the Legal & Legislative Committee of the Board of Trustees of the. State Universities Retirement System . Friday, December 9, 2016, 10:00 a.m.

Board, Trustee, Of the board of trustees of the

3 trustee Cross, present; trustee Giertz, present; trustee Johnson, present; trustee Rock, present; and trustee Vasquez, present. APPROVAL OF MINUTES . trustee Tom Cross presented the MINUTES from the Legal and Legislative Committee meeting of September 15, 2016, and trustee Steven Rock made the following motion: That the MINUTES from the September 15, 2016 Legal and Legislative Committee meeting be approved, as presented. trustee Antonio Vasquez seconded and the motion carried with all Trustees present voting in favor. CHAIRPERSON'S REPORT. trustee Cross remarked that he did not have a formal Chairperson's Report.

5 As Exhibit 2; copies of the 2017 Senate and House calendars as Exhibit 3 and Exhibit 4 and a listing of Important Dates for the 2017 Spring Session as Exhibit 5 are incorporated as a part of these MINUTES . COGFA SPECIAL PENSION BRIEFING. Ms. Houch highlighted that the Illinois public pension systems are percent funded based on actuarial value of assets and percent based on the market value of assets. She further noted the ranking of SURS and TRS as the top two funded systems. Ms. Houch highlighted additional items within the report and Trustees engaged in additional discussion on this topic.

6 trustee Craig McCrohon physically joined the meeting at 10:26 A copy of the Commission of Government Forecasting and Accountability's publication titled Special Pension Briefing is incorporated as a part of these MINUTES as Exhibit 6. RULEMAKING. Approval of the January 2017 Regulatory Agenda Ms. Bianca Green presented the draft January 2017 Regulatory Agenda for approval. She noted that SURS is required by law to file a regulatory agenda in January and July each year. The regulatory agenda notifies the public of possible administrative rule changes SURS might seek to make.

7 The regulatory agenda is approved by the Board in June and December each year and once approved it must be filed with the Illinois Secretary of State's Office. It can be amended as needed. Ms. Green highlighted two new items that were added to the proposed January regulatory agenda: Section and Section trustee Vasquez moved: That the January 2017 Regulatory Agenda be approved and filed as presented. trustee Rock seconded and the motion carried with all Trustees present voting in favor. Approval of Rulemaking Changes Ms. Green reminded the committee that the following rules were presented to them for consideration during the September 2016 meeting.

8 She summarized the proposed rulemaking changes found in sections , and and recommended approval of the same. trustee Rock moved: That the proposed rulemakings provided by General Counsel be filed with the Joint Committee on Administrative Rules substantially in the form presented. trustee Vasquez seconded and the motion carried with all Trustees present voting in favor. A copy of the State Universities Retirement System January 2017 Regulatory Agenda . redline as Exhibit 7 and the staff memorandum titled Proposed Rulemakings for Benefits Administration as Exhibit 8 are incorporated as part of these MINUTES .

9 COMPLIANCE UPDATE. Ms. Green directed the committee to the updated stop light report which is a compliance reporting and tracking tool initiated by former interim Executive Director Mr. William Mabe. Ms. Green noted that Ms. Allison Kushner, compliance officer, updates this report monthly and she indicated that SURS is currently in compliance with its reporting requirements. A copy of the report titled Compliance Stop Light Report is incorporated as a part of these MINUTES as Exhibit 9. PUBLIC COMMENT. There were no public comments presented to the Legal and Legislative Committee. MINUTES Meeting of the Investment Committee of the Board of Trustees of the State Universities Retirement System 10:30 a.m., Thursday, October 17, 2013 MINUTES Meeting of the Corporate Governance Committee of the Board of Trustees of the State Universities Retirement System 4:30 p.m., Thursday, September 10, 2015 MINUTES Meeting of the Audit & Risk Committee of the Board of Trustees of the State Universities Retirement System 4:00 p.m., Thursday, June 11, 2015 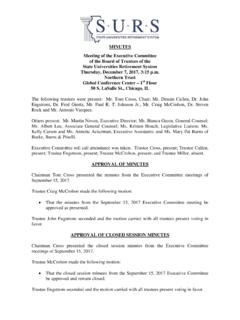 MINUTES Meeting of the Executive Committee of …

MINUTES . Meeting of the Executive Committee . of the Board of Trustees of the . State Universities Retirement System . Thursday, December 7, 2017, 3:15 p.m. Records of the General Conference Twentieth … - iii - PREFACE The Sixty-eighth World Health Assembly was held at the Palais des Nations, Geneva, from 18 to 26 May 2015, in accordance with the decision of the Executive Board at its 135th session.1 1 Decision EB135(8). MANUAL - Food and Agriculture Organization of …

STAFF REGULATIONS AND STAFF RULES - WHO