3 All guidelines should be read in conjunction with the Disclaimer Neonatal Abstinence SCORING SYSTEM. The NAS Score sheet lists 21 symptoms that are most frequently observed in opiate-exposed infants. Each symptom and its associated degree of severity are assigned a Score and the total Abstinence Score is determined by totalling the Score assigned to each symptom over the scoring period. Key points The first Abstinence Score should be recorded approximately two hours after birth or admission to the nursery (baseline Score ). This Score reflects all infant behaviour up to the first scoring interval time point. Following the baseline Score all infants should be scored at 4-hourly intervals, except when high scores indicate more frequent scoring. The Score sheet allows for 2-hourly scoring over the 24-hour period.

4 A new sheet should be started at the beginning of each day. Scoring is dynamic. All signs and symptoms observed during the scoring interval are included in the point-total for that period. If the infant's Score at any scoring interval is 8, scoring is increased to 2-hourly and continued for 24 hours from the last total Score of 8 or higher. If the 2-hourly Score is 7 for 24 hours then 4-hourly scoring intervals may be resumed. If pharmacotherapy is not needed the infant is scored for the first 4 days of life at 4-hourly intervals. If pharmacotherapy is required the infant is scored at 2- or 4-hourly intervals, depending on whether the Abstinence Score is less than or greater than 8 throughout the duration of therapeutic period. If after cessation of pharmacotherapy the Score is less than 8 for the following 3 days, then scoring may be discontinued.

5 If after cessation of pharmacotherapy the Score is consistently 8 or more, then scoring should be continued for the following 4 days (minimum) to ensure that the infant is not likely to develop late onset of withdrawal symptoms at home following discharge. Guide to assessment and scoring2, 3. The Neonatal Abstinence syndrome scoring system was designed for term babies on four-hourly feeds and may therefore need modification for preterm infants. In a term infant scoring should be performed 30 minutes to one hour after a feed, before the baby falls asleep. If necessary the infant should be awakened to elicit reflexes and behaviour, but if the infant is woken to be scored then diminished sleep after scoring should not be recorded. A crying infant should be soothed and quietened before assessing muscle tone, Moro reflex and respiratory rate.

6 Score 2 if high-pitched at its peak, 3 if high-pitched throughout. Infant is High-pitched cry scored if crying is prolonged, even if it is not This is a scale of increasing severity and a term infant should receive only one Score from the three levels of severity. A premature infant on 3 hourly feeds Sleep can sleep for 2 hours at most. Scoring should thus be 1 if the baby sleeps less than 2 hours, 2 if less than 1 hour and 3 if the baby does not sleep between Moro reflex The Moro or startle reflex is a normal reflex of young infants and occurs when a sudden loud noise causes the child to stretch out the arms and flex the legs. Score if the infant exhibits pronounced jitteriness (rhythmic tremors that are symmetrical and involuntary) of the hands during or at the end of a Moro reflex.

7 Score 3 if jitteriness and clonus (repetitive involuntary jerks) of the hands and/or arms are present during or after the initiation of the reflex. Western Australian Centre for Evidence Based Nursing & Midwifery, January 2007 (RHSET 01660A) Page 2 of 4. All guidelines should be read in conjunction with the Disclaimer Neonatal Abstinence SCORING SYSTEM. Tremors This is a scale of increasing severity and an infant should only receive one Score from the four levels of severity. Undisturbed refers to the baby being asleep or at rest in the Increased muscle tone Score if excessive or above-normal muscle tone or tension is observed - muscles become "stiff" or rigid and the infant shows marked resistance to passive movements, if the infant does not experience any head lag when being pulled to the sitting position; or if there is tight flexion of the infant's arms and legs (unable to slightly extend these when an attempt is made to extend and release the supine infant's arms and legs).

8 4. Excoriation Excoriations (skin abrasions resulting from constant rubbing against a surface that is covered with fabric such as bed linen). Score only when excoriations first appear, increase or appear in a new Myoclonic jerks Score if involuntary muscular contractions which are irregular and exceedingly abrupt (usually involving a single group of muscles) are Generalised convulsions In the newborn infant generalised seizures or convulsions are often referred to as tonic seizures. They are most commonly seen as generalised activity involving tonic extensions of all limbs, but are sometimes limited to one or both limbs on one side. Unusual limb movements may accompany a seizure. In the upper limbs these often resemble "swimming" or "rowing . In the lower limbs, they resemble "pedalling" or "bicycling.

9 " Other subtle signs may include eye staring, rapid involuntary movements of the eyes, chewing, back arching, and fist Score if sweating is spontaneous and is not due to excessive clothing or high Sweating room temperature4. Temperature should be taken per axilla. Mild pyrexia ( C) is an early Hyperthermia indication of heat produced by increased muscle tone and tremors. Yawning Score if more than 3 yawns observed within the scoring , 4. Mottling Score if mottling (marbled appearance of pink and pale or white areas) is present on the infant's chest, trunk, arms, or Nasal stuffiness Score if the infant sounds congested; mucous may be Sneezing Score if more than 3 sneezes observed within the scoring , 4. Nasal flaring Score only if repeated dilation of the nostrils is observed without other evidence of lung or airways Respiratory rate Respirations are counted for one full minute.

10 Score only if >60 per minute without other evidence of lung or airways Score 2 if respiration involves drawing in of the intercostal muscles (retractions). Excessive sucking Score if hyperactive/disorganised sucking, increased rooting reflex, or attempts to suck fists or thumbs (more than that of an average hungry infant). are , 4. Poor feeding Score if the infant demonstrates excessive sucking prior to feeding, yet sucks infrequently during a feeding taking a small amount of breast milk or formula, and / or demonstrates an uncoordinated sucking reflex (difficulty sucking and swallowing).3 Premature infants may require tube feeding and should not be scored for poor feeding if tube feeding is expected at their Regurgitation Score if at least one episode of regurgitation is observed even if vomit is contained in the Loose/watery stools Score if loose (curds/seedy appearance) or watery stools (water ring on nappy around stool) are observed. 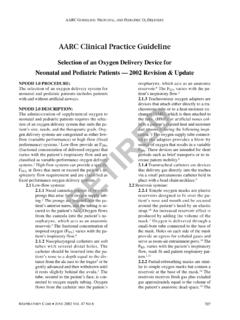