1 Introduction The popularity of multilevel modeling and structural equation modeling (SEM) is a striking feature of quantitative research in the medical, behavioral and so-

2 Different approaches to extending structural equation models for such Multilevel settings are examined. The most common approach is to formulate separate within-cluster and between-cluster models. An advantage of this set-up is that it allows software for conventional struc- tural equation models to be tricked' into estimating the model. However, the standard implementation of this approach does not permit cross-level paths from latent or observed variables at a higher level to latent or ob- served variables at a lower level, and does not allow for indicators varying at higher levels. A Multilevel regression (or path) model formulation is therefore suggested in which some of the response variables and some of the explanatory variables at the different levels are latent and measured by multiple indicators.

4 To appear in: S. Y. Lee (Ed.). Handbook on structural structural equation Models. Amsterdam: Elsevier. 1. 1 introduction The popularity of Multilevel modeling and structural equation modeling (SEM). is a striking feature of quantitative research in the medical, behavioral and so- cial sciences. Although developed separately and for different purposes, SEM. and Multilevel modeling have important communalities since both approaches include latent variables or random effects to induce, and therefore explain, cor- relations among responses. Multilevel regression models are used when the data structure is hierarchical with elementary units at level 1 nested in clusters at level 2, which in turn may be nested in (super)clusters at level 3, and so on.

5 The latent variables, or ran- dom effects, are interpreted as unobserved heterogeneity at the different levels which induce dependence among all lower-level units belonging to a higher-level unit. Random intercepts represent heterogeneity between clusters in the over- all response and random coefficients represent heterogeneity in the relationship between the response and explanatory variables. structural equation models are used when the variables of interest cannot be measured perfectly. Instead, there are either sets of items reflecting a hypotheti- cal construct ( depression) or fallible measurements of a variable ( calory intake) using different instruments.

6 The latent variables, or factors, are inter- preted as constructs, traits or true' variables, underlying the measured items and inducing dependence among them. The measurement model is sometimes of interest in its own right, but relations among the factors or between factors and observed variables (the structural part of the model) are often the focus of investigation. Importantly, Multilevel structural equation modeling , a synthesis of Multilevel and structural equation modeling , is required for valid statistical inference when the units of observation form a hierarchy of nested clusters and some variables of interest are measured by a set of items or fallible instruments.

9 A threshold model links the observed response for the ith indicator to the corresponding latent response, . yij = s if is < yij i,s+1 , s = 0, .. , S 1, i0 = , iS = . The threshold parameters is (apart from i0 and iS ) can all be estimated if the mean and variance of y j are fixed. Alternatively, two thresholds can be fixed (typically i1 = 0 and i2 = 1) for each response variable to identify the means and variances of y j . Grouped or interval censored continuous responses can be modeled in the same way by constraining the threshold parameters to the limits of the censoring intervals. By allowing unit-specific right-censoring, this approach can be used for discrete time durations.

Multilevel modelling of ordered and unordered … 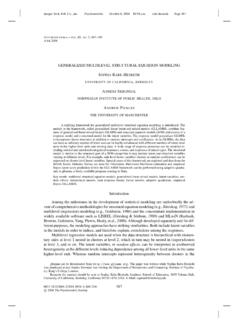 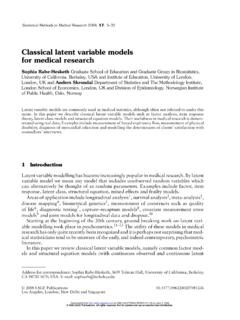 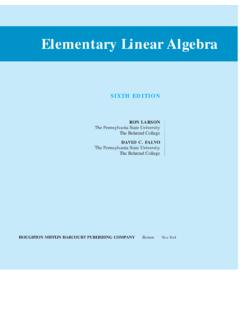 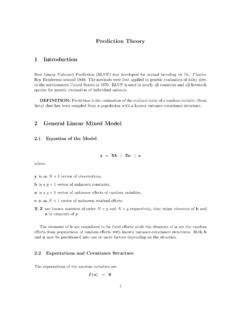 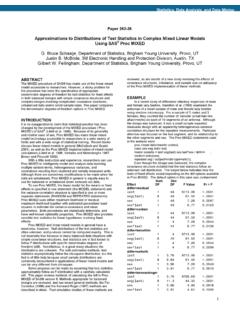 SUGI 26: Approximations to Distributions of Test ... 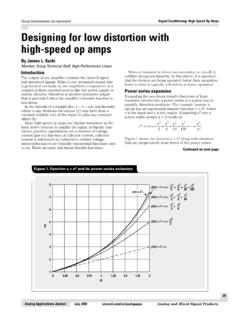 2. Fitting of General Linear Models in GENMOD and Other Procedures There are many procedures besides PROC GENMOD in the SAS System for the fitting of