Naltrexone Side Effects and Efficacy in GI Disorders

4 3 (25.0%) were mildly improved 1 (8.3%) was unchanged Eight patients with inflammatory bowel disease (4 Crohn’s and 4 ulcerative colitis) were

2 Patients (206). from a single gastroenterologist's clinical practice who had been prescribed Naltrexone were mailed a survey to evaluate the side Effects and Efficacy of Naltrexone . Patients had either irritable bowel syndrome without evidence for small intestinal bacterial overgrowth, irritable bowel syndrome with evidence of small intestinal bacterial overgrowth, chronic idiopathic constipation, or inflammatory bowel disease. Patients with diarrhea were given mg daily, constipation mg twice daily, and inflammatory bowel disease mg daily. In the patients who returned the survey, 47/121 ( ) had no side Effects . Of the 74/121 ( ) patients who had side Effects , 58 had one or more neurological complaints, and 32 had one or more gastrointestinal side Effects .

4 Two of 8. patients with inflammatory bowel disease were markedly improved, 1 was moderately improved, 1 was mildly improved, and 4 were unchanged. Low dose Naltrexone frequently has side Effects but in most is tolerable. It appears to be helpful for a number of patients with gastrointestinal Disorders . Introduction Naltrexone is Food and Drug Administration (FDA)-approved for relapse prevention of alcohol dependence, and it plays a role in relapse prevention of narcotic The dose of oral Naltrexone for these purposes is 50 mg daily. Use of low dose Naltrexone (LDN) ( to mg daily) has been advocated on the Internet for a variety of medical Only a few articles on LDN or ultra-LDN have been published in peer reviewed A recent review elucidated the potential mode of action including immune-modulation and anti- inflammatory Manipulation of opioid receptors has potential application in gastrointestinal Disorders .

6 Methylnaltrexone is effective for opioid-induced constipation by reversing peripheral opioid At this point in time, methylnaltrexone is not available in oral formulation and thus the role of oral LDN needs to be further defined. The purpose of this study was to determine the frequency of adverse Effects of LDN in patients who have been treated for a variety of gastrointestinal (GI). Disorders . The secondary purpose was to determine global Efficacy in a retrospective survey. Material and Methods LDN was compounded in and capsules. The source of Naltrexone was Spectrum Chemical Manufacturing Corporation. Compounding began by first calculating the ingredient filling constants.

7 Ingredients other than Naltrexone included microcrystalline cellulose as a filler and some food color powder to assure proper blending of powders. Formulas for batches of 100 and 300 capsules were calculated using the filling constants; and powders were mixed using an electronic mortar and pestle. The final powder mixture was then placed into empty size #3 gelatin capsules which were locked into capsule machines. Once the capsules were appropriately packed, the capsule tops were locked onto the capsule bottoms. Patients from a single gastroenterologist's clinical practice who had been prescribed Naltrexone in a two-year period were mailed a letter asking if they would participate in a survey to evaluate the side Effects and Efficacy of Naltrexone .

8 If they did not return the survey they were called once to remind them to fill out the survey. The majority of the patients had received prescriptions in the previous six months. Patients (206) with the following GI conditions were given prescriptions for LDN: IBS. without evidence for small intestinal bacterial overgrowth (SIBO) ( , patients with a normal lactulose breath test), IBS with evidence of SIBO (using Naltrexone as a second phase of treatment in efforts to improve motility and reduce inflammation), chronic idiopathic constipation, and patients with inflammatory bowel disease. Patients with diarrhea were given mg daily, constipation mg twice daily, and inflammatory bowel disease mg daily.

10 They were asked if their overall GI symptoms were markedly improved, moderately improved, slightly improved, unchanged, slightly worse, moderately worse, or markedly worse. If they had SIBO, they were asked if they needed to take another antibiotic since being placed on Naltrexone . Results Surveys were returned by 121/206 ( ) of the patients. The mean age ( 1 standard deviation) was Of these 92 women and 29 men, 85 had IBS with SIBO, 14 had idiopathic IBS, 12 had slow transit chronic constipation, 8 had inflammatory bowel disease (Crohn's disease in 4 and ulcerative colitis in 4), and 2 had small bowel pseudoobstruction. 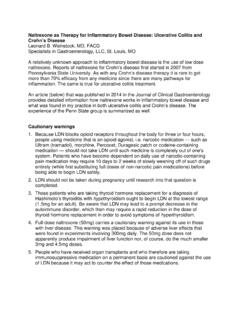 Naltrexone as Therapy for Inflammatory Bowel … 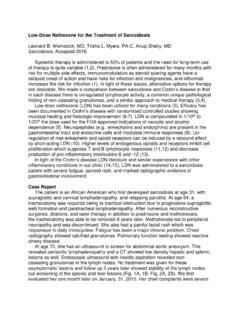 Low-Dose Naltrexone for the Treatment of Sarcoidosis 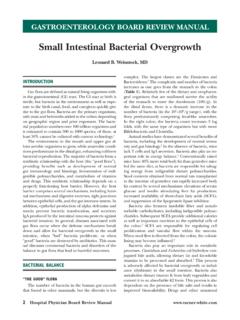 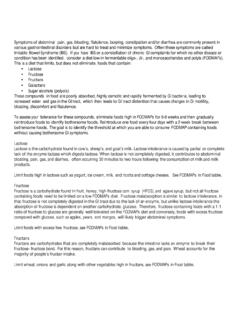 You will work with your Nutrition Counselor to …

Follow a low FODMAP diet for a ... You will work with your Nutrition Counselor to determine the order of challenge and which foods ... low FODMAP fruits, kiwi, ... Body Positions for Colonoscopy: Value of the Trendelenburg ...

Body Positions for Colonoscopy: Value of the Trendelenburg position To the Editor: Although the review of techniques for the very difficult colon by Dr. Rex is excellent

Naltrexone as Therapy for Inflammatory Bowel …

Page 3 of 10 Discontinuation of therapy with methadone should be carried out gradually in patients who may have developed physical dependence to the drug in order to avoid precipitating withdrawal symptoms.