The Michael J. Fox Foundation for Parkinson’s Research 1 Thinking about Brain Health Parkinson’s disease (PD) traditionally is called a “movement” disorder because of its classic

2 Thinking and memory ( Cognitive ) Changes can be part of the Disease , too. Not everyone with PD experiences Cognitive issues and, as with all parkinson 's symptoms, when and how they occur is unique to each 1. Navigating Cognitive Changes in parkinson 's Disease person. But many people with parkinson 's and their research into why these Changes happen and how to families say Changes in thinking and memory are treat and ultimately prevent them. By opening the among the most concerning potential symptoms of conversation, you can take steps to keep your brain the Disease .

3 These symptoms are, unfortunately, also healthy and recognize Changes if they happen. some of the least talked about. Doctors may focus on We created this guide in collaboration with people movement problems, especially in the early years and families who live with parkinson 's and related after a diagnosis. And patients and families may be disorders and the expert clinicians who care for unsure about what they're experiencing. It's them. It is intended to help you understand your common for people to attribute Cognitive Changes to experiences, start a dialogue about brain health and aging or to not talk about them at all, because they connect to ongoing research.

4 Whether you want to don't want to think about what may (or may not). know the bare minimum, everything there is to lie ahead. know, or like many people you're somewhere But avoiding discussion can increase fear, in between, we hope you take the information and misperception and misinformation and lessen practical tips that speak to you, wherever you are in quality of life. It also can slow much-needed your journey with PD or Cognitive Changes . It's common for people to attribute Cognitive Changes to aging or to not talk about them at all. 2. The Michael J. Fox Foundation for parkinson 's Research What Is Cognition?

5 Cognition is the work our brain does to collect, process, remember and respond to information. It's anything we do that requires thought or memory: getting ready for work, chatting with friends, reminiscing about childhood or setting goals for the future. There are different aspects of cognition: ! Attention Executive function Attention is focusing on one thing while tuning Executive function includes multitasking, problem- out everything else. You need to pay attention to watch solving, organizing, planning and decision-making. a movie, drive a car or be part of a group conversation.

6 These parts of cognition control and coordinate other brain functions and behavior. Doctors call these executive functions because they're similar to the responsibilities of an executive who runs multiple departments of a company. Memory Memory is the storage of information to recall or use later. Different systems store different types of memories. Long-term memories are kept for days, weeks, years or decades, and include facts (who the Language president is), life experiences (where you went to Language is the system we use to communicate school or when you got married) and skills (how to through speaking and writing.)

7 It involves naming ride a bike or brush your teeth). Short-term memory objects (calling a tree a tree, for example), holds small bits of data for short periods (such as a understanding words' meanings, finding the words phone number that you forget after you write it down). you need to speak smoothly and without pauses, Working memory is for information that you are and using sounds and phrases to accurately actively using (storing numbers in your head while you express yourself. work with them to solve a math problem, for example). 3. Navigating Cognitive Changes in parkinson 's Disease Because parkinson 's also can affect cognition, it can be hard to know what's normal aging and what's part of the Disease .

8 Bret Parker, a lawyer and co-chair of The Michael J. Fox Foundation (MJFF) Patient Visuospatial skills Council, says, Sometimes I can't tell if my brain just isn't as sharp as it used to be because I'm getting Visuospatial abilities help you create a mental older or because of parkinson 's.. picture of your surroundings and tell where you are in relation to other objects. These skills enable you Cognitive Changes from parkinson 's often are to give directions, judge the distance between your different or more than you'd expect with age. As you car and the one in front of you, and find your way get older, it may be normal to leave your keys in the home after a walk around the neighborhood.

9 Door, forget something at the grocery store or miss an occasional bill payment. But age alone doesn't usually As we get older, cognition naturally Changes because cause a person to forget what their keys are for or our brains change. Vocabulary and general how to use them, how to get to and around their usual knowledge tend to increase, but it can be harder to grocery store, or how to balance the checkbook and understand and learn new information as easily or as transfer money between bank accounts. quickly. Using a smartphone or playing a new card game, for example, may take more mental effort.

10 To get a sense of what is or isn't typical, you might ask Memory may not work as well as it did in previous friends in your age group (both with and without years. Many people have difficulty recalling new parkinson 's) if they have similar experiences and acquaintances' names, forget why they walked into a gauge how you're doing with your daily activities. room or misplace items, such as eyeglasses. (See page 8: Keeping Track of Cognitive Changes .). Cognitive Changes from parkinson 's often are different or more than you'd expect with age. 4. The Michael J. Fox Foundation for parkinson 's Research Boosting Brain Health Whether you're experiencing Cognitive Changes or you worry about the possibility, you can take steps to keep your brain as healthy as possible. 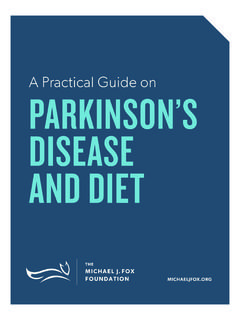 The Michael . Fox Foundation for Parkinsons Research A Practical Guide on Parkinson’s Disease and Diet 4 Parkinson’s and Low Blood Pressure

I think I might have Parkinson’s disease and I’m …

I think I might have Parkinson’s disease and I’m not sure what to do This screening questionnaire was developed by Dr. Joseph Jankovic, a member of the Scientific 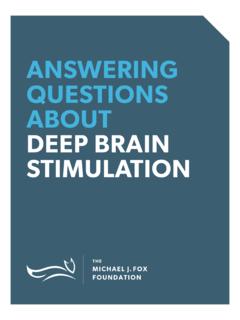 The Michael J. Fox Foundation for Parkinsons Research Answering uestions about Deep Brain Stimulation 2 MJFF: When in the disease course is

ffstflstfi st stfifi Women and Parkinson’s Disease Parkinson’s disease (PD) affects an estimated 10 million men and women worldwide. Women have been shown to have a lower risk of developing PD, and research suggests Diet and Parkinson’s Symptoms Constipation Constipation is, unfortunately, common for people with Parkinson’s disease. Not only is this non-movement symptom uncomfortable, it can interfere with the Medications To Be Avoided Or Used With Caution in ...