4 The Houston Ship Channel consists of a main channel with a project depth of 45 feet, width of 530 feet, and barge lanes on either side between the Gulf Intracoastal Waterway and Morgan’s Point.

2 Similar expansions are ongoing for the Texas City and Galveston channels. The deepening and widening of the Houston ship Channel incorporated barge lanes on either side of the deep Channel and permits the safe movement of larger volumes of mixed use traffic and expanded opportunities for our ports and all who use their facilities. To capitalize on these improvements, however, we must maintain a safe navigation environment. This means adjusting our operations and procedures to accommodate heavy traffic and large vessels in the Channel . With some simple considerations, and continued cooperation among vessel operators, we can ensure a deeper, wider, and safer waterway. 4 The Houston ship Channel consists of a main Channel with a project depth of 45 feet, width of 530 feet, and barge lanes on either side between the Gulf Intracoastal Waterway and Morgan s Point.

3 A cross section of the improved Channel shows: A main Channel dredged to a project depth of 45 feet and width of 530 feet; 35-foot wide transition slopes on either side of the main Channel , measuring 45 feet deep at their innermost point, and 12 feet deep at their outermost point; 200-foot wide barge lanes outside the transition slopes, measuring 12 feet deep; and, Width of the entire Channel along this reach as 1000 feet. Navigable space within the barge lanes includes the 35-foot transition slope, for a total navigable width of 235 feet on either side of the main Channel . The outer edges of the barge lanes are marked with gated beacons in good water, but inner edges are left unmarked. Tow operators are encouraged to use the lanes as a safe navigation space, leaving the main Channel free for faster-moving vessels and deep-draft ships.

4 Operators should be aware, however, of hydraulic effects caused by the new Channel configuration. Currents in the barge lanes may run slightly faster due to their shallower depth, and forces exerted by larger displacement ships will be amplified. See the sections on Deepdraft/Tow Interactions and Mooring Issues for additional details on the impact of hydraulic effects. Our Houston ship Channel 5 Every vessel type transiting the Houston ship Channel has its own unique navigational challenges and limitations. In order to maintain a safe environment, it is important to understand the differences between vessel types, and how their operation impacts others on the waterway. Can you see off that ship ? A ship s configuration and cargo affect the vessel operator s line of sight from the ship s bridge. The blind spot ahead of the bow can be a few hundred feet or thousands of feet in the case of deep draft container ships.

5 Cranes, containers and cargo canopies can create additional blind spots. Towboat and other vessel operators should exercise extreme caution when attempting to overtake a ship , taking care to avoid blind spots and to communicate intentions when necessary. How much does that ship hold, and why should I care? With the deepening and widening project complete, the Houston ship Channel can accommodate the massive Suezmax tanker. On average, the Suezmax is 70 feet longer and 20 feet wider than the Aframax the largest vessel permissible in the Channel prior to the deepening and widening project. It is also capable of carrying up to 40% more cargo. The larger size and cargo capacity of the Suezmax tanker means more weight and greater water displacement in the Channel . This leads to amplification of hydraulic forces exerted on other vessels in the vicinity.

6 DANGER ZONE Aframax Length: 830 Beam: 145 Dra : 38 Suezmax Length: 899 Beam: 164 Dra : 45 Empire State Building Height: 1250 Deepdraft / Tow Interaction 6 A moving ship pushes water away from its hull in all directions. As the ship moves forward, water will flow around and under the vessel to fill space in its wake. Areas of high pressure exist on both sides of the moving ship s bow as water is displaced. As it flows along the sides of the ship , water speed increases until it reaches an area of low pressure near the stern. This is where ship s suction occurs. ship s suction is a hydraulic effect that draws neighboring vessels toward the stern as the ship passes, or pulls the stern near the bank of the Channel when transiting close to shore. When two ships meet in the Channel , this effect can turn each of them off-course in a counter-clockwise direction (assuming opposing vessels are both on their respective right sides of the Channel ).

7 This poses potential danger to vessels following either ship . To avoid this hazard, vessels should maintain following distances large enough to permit meeting ships to correct their course. In similar fashion, a ship exerts suction on vessels it overtakes in the Channel . To mitigate the effect, tow operators are encouraged to position their vessels at an angle to the ship s path (with the stern pointing toward the ship and the bow pointing away from the ship ).. Hydraulic effects on moored vessels are also amplified by the presence of larger ships in the Houston ship Channel . Please see the section on Mooring Issues for tips on mitigating these effects. Water Flow Around a Moving ship Low Pressure High Pressure The effect of ship s suc on of passing vessels can jeopardize those following too closely Compensating for hydrodynamics A tow prepares to be overtaken by a ship in the Channel .

8 7 Vessel berths along the Houston ship Channel are numerous and varied and you can expect to encounter vessels berthing and unberthing at all times of the day and night. Assisting those vessels will be harbor tugs. Harbor tugs are powerful and maneuverable vessels that range in horsepower from 1700 to 6300 Hp Z-drive tugs. Tug designs may vary from single screw conventional tugs to advanced twin screw azimuth stern drive (Z-drives), these design differences account for varied performance in both power and maneuvering capability. When assisting ships, harbor tugs may or may not be made up to the vessel with a line, but regardless it is imperative you recognize the tug is assisting a vessel and provide a wide berth for the operation one minute the tug can be working against the vessel and the next be stretched out on their lines.

9 Additionally, tugs may be maneuvering around the vessel while they assist with the berthing/unberthing; they may suddenly move into sight as they move from the one side of the vessel to the other very rapidly. Tugs also produce vessel very powerful propeller wash that may affect tows passing in close proximity. Harbor tugs have much deeper drafts than towboats and will usually be restricted to the deeper areas of the Channel . While assisting ships, the actions of the tugs are at the direction of a State Pilot or the ship s Master. It is common practice that the Pilot will make a broadcast on Channel 13 before they shift to a working Channel to direct the operation of the tugs. You should maintain a VHF radio listening watch (see section later in this publication), so the pilot assisting the vessel can communicate with you regarding the movement(s) of the vessel and/or tugs.

10 Working Around Harbor Tugs 8 With deepening and widening of the Houston ship Channel complete, ships larger than ever before transit the Channel . These ships some with as much as 40% more cargo capacity than the largest ships permissible within previous Channel dimensions can exert much stronger forces on moored vessels. As a passing ship approaches, the water surge ahead of it will cause a water flow at the pier in the direction of the passing ship . As the ship passes, water flow at the berth will shift direction, drawing the moored vessel in the opposite direction. A third force comes into play as the stern of the vessel passes. This force follows the passing vessel and is diametrically opposed to the previous force. In a short period, the moored vessel will be pushed in different directions three times. 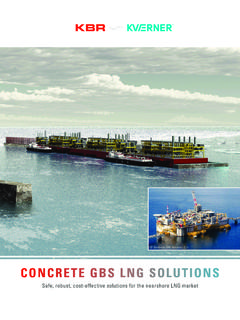 Safe, robust, cost-effective solutions for the …

Safe, robust, cost-effective solutions for the