2014 Ethics in Government Manual for Nevada Public Officers and Public Employees: NRS 281A 4 . In response to the 1971 resolution, the Legislative Commission

2 And WHEREAS, public officers and employees of the State of Nevada are presently without adequate guidelines for separating their roles as private citizens from their roles as public servants, and the laws regarding conflict of interest are an uncoordinated patchwork; now, therefore, be it Resolved by the Assembly of the State of Nevada , the Senate concurring, that the legislative Commission is directed to make a study of the important problem of conflicts of interest at all levels of government, including the legislature of the State of Nevada , and to report the results of such study and any recommendations for proposed legislation to the 57th session of the legislature. 3. 2014 Ethics in Government Manual for Nevada public Officers and public Employees: NRS 281A. In response to the 1971 resolution, the Legislative Commission appointed Assemblymen M. Kent Hafen and Nick Lauri, and Senators Lee E. Walker and C. Clifton Young to study the matter. On December 21, 1972, the study committee reported its findings, along with suggested Ethics legislation.

3 However, in the 1973 legislative session, no Ethics Laws resulted from the Committee's recommendations or from the concerns raised in the study. Before the next legislative session began, in 1974, Assemblyman Joe Dini of Yerington attended a three-day legislative seminar at the Eagleton Institute for Government Ethics in the northeastern United States. Shortly thereafter, with the assistance of then-Speaker Keith Ashworth, Majority Floor Leader Dini introduced nearly 20 Ethics measures in 1975. Not one of those measures passed. In 1977, Dini was named Speaker of the Assembly, and he tried again, introducing one consolidated Ethics bill, which passed. Nevada had its first Ethics Law! The next year, the Nevada Supreme Court declared the law unconstitutional. The 1979 Legislature created an Executive Ethics Commission and a Legislative Ethics Commission which operated separately (or failed to operate) until 1985. Those six years were filled with conflict, but, in 1985 with the cooperative efforts of the Legislature and then- governor Richard Bryan, funds were allocated and a unified Nevada Commission on Ethics emerged.

4 That body has grown, a supporting agency developed, and the law has been expanded since 1985. The Commission continues to function to today. WHY have a Commission on Ethics ? "It is hereby declared to be the public policy of this State that: (a) A public office is a public trust and shall be held for the sole benefit of the people. 4. 2014 Ethics in Government Manual for Nevada public Officers and public Employees: NRS 281A. (b) A public officer or employee must commit himself or herself to avoid conflicts between the private interests of the public officer or employee and those of the general public whom the public officer or employee serves." NRS (1). These public policy statements form the cornerstone of the Commission , its mission and its activities. As the complexity of state and local government increases, and government is more and more closely related to private life and enterprise, the potential for conflicts of interest enlarges. The Commission and the Legislature are charged with providing adequate guidelines to show the appropriate separation between the roles of persons who are both public servants and private citizens.

5 NRS (2)(a). We all must work to enhance the people's faith in the integrity and impartiality of Nevada 's public officers and employees. NRS (2)(b). The general policy objectives for the Ethics in Government Law ( Ethics Law) include: (1) treating those persons and entities that deal with government with impartiality, fairness and equality;. (2) assuring that decisions of public importance are not influenced by private considerations;. (3) maintaining public confidence in government, which implicates the matter of appearances; and (4) preventing the use of public office for private gain. State Legislators undertaking core legislative functions hold a special status with the Commission on Ethics , due to provisions in the Nevada Constitution and NRS which outlines legislative privileges and immunities. The Judicial Branch also has a special status, based on similar constitutional provisions that keep it and its officers and employees wholly separate from the jurisdiction of the Ethics Commission .

6 5. 2014 Ethics in Government Manual for Nevada public Officers and public Employees: NRS 281A. The Special Status of State Legislators After being subjected to the Ethics Law for a decade or so, State legislators became distressed that the Ethics Law appeared to require them, as elected public officers who serve part-time, to disclose conflicts and abstain from participating in legislative deliberations and votes even when they had limited or nominal conflicts of interest. The next session, the following policy statement was added: When interpreting the Ethics Laws and applying them to State Legislators, the Commission must give appropriate weight and proper deference to the public policy of this State under which State Legislators serve as citizen Legislators who have other occupations and business interests, who are expected to have particular philosophies and perspectives that are necessarily influenced by their life experiences, and who are expected to contribute those philosophies and perspectives to the debate over issues with which the Legislature is confronted.

7 NRS (2)(c). Commissioners of the Commission on Ethics Each of the eight members on the Commission on Ethics is appointed to a four-year term. The Legislative Commission appoints four Nevada residents. At least two must be former public officers or employees, and at least one must be a Nevada -licensed attorney. The Governor also appoints four Nevada residents - two former public officers or employees, and at least one attorney licensed to practice law in Nevada . Not more than four members of the Commission may be members of the same political party, and not more than four members may be residents of the same county. While serving on the Commission , no member may hold another public office, be actively involved in the work of any political party or political campaign, or communicate directly with a State Legislator or a member of a local legislative body on behalf of someone other than himself or herself - other than on behalf of the Commission . NRS 6. 2014 Ethics in Government Manual for Nevada public Officers and public Employees: NRS 281A. 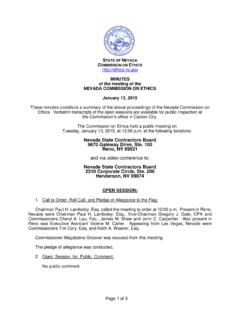 BEFORE THE NEVADA COMMISSION ON ETHICS

STATE OF NEVADA . BEFORE THE NEVADA COMMISSION ON ETHICS . ... confidential advisory opinion from the Nevada Commission on ... on the Nevada State Contractors Board ...

States, Commission, Board, Nevada, Before, Ethics, Contractor, Nevada state contractors board, Before the nevada commission on ethics

Background Investigations of Peace Officers and …

v ACKNOWLEDGEMENT The Background Investigation Manual: Guidelines for the Investigator provides a comprehensive guide for conducting background investigations of peace officer and public

Public Records Open to Disclosure: In general, all records except those specifically cited as exceptions are covered by the FOIA. The records covered include minutes of open meetings, officials’ voting

Public Officials and State Employees Guide to the …

Public Officials and State Employees Guide to the … 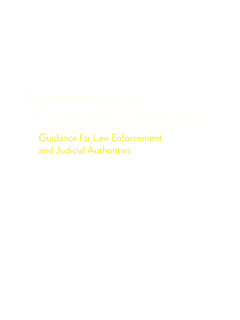