2 Permits/Licenses This State Honors Listed Below new york does not honor any other states Permit/License. IMPORTANT NOTE: Your new york State pistol license is only valid in the counties outside the 5. counties of new york City unless it is validated by new york City. You may not take your handguns into the city, this includes Self Protection licensees, with a few exceptions. How to Apply for a Permit new york has so many laws and regulations that applying for a permit to carry can be a long drawn out process in some counties or rapid in others . Your best course of action is to check with the Licensing Officer in your City or County as they have a set procedure they go by. Of the fifty-nine (59) licensing jurisdictions, fifty-five (55) issue pistol licenses through the courts with a judge serving as the licensing officer.

3 Background investigations however are conducted by the local law enforcement agencies. The remaining jurisdictions, new york City, Nassau and Suffolk Counties have licensing officers that are either Police Commissioners or a Sheriff. All upstate counties except Westchester have lifetime-licenses, also known as Good-Until-Revoked . Nassau, Suffolk and Westchester licenses expire every five years (5) and licenses issued in new york City have a two-year (2) expiration. 1. Note: New Law passed 1/15/13 states you must verify your permit every five years with authorities. Every 5 years you will need to verify the following information on your pistol permit to the new york State Police: name, DOB, gender, race, residential address, social security number, the firearms possessed, and if you want, your e-mail address.

4 The purpose of the recertification is to update information. This recertification process will not be in place for one year. Once it is in place, you will have up to four years to do your first recertification. If you still have not recertified after four years, you will receive a notice to recertify. Once you have completed the recertification, you must recertify every five years thereafter. If you do not recertify, your permit will no longer be valid and you will need to reapply. You can read the information Here or Here. Types Of Pistol Licenses As Per Section 2. Of The new york State Penal Law (a) Premise Dwelling Have and possess in his dwelling by a householder. (b) Premise Business Have and possess in his place of business by a merchant or storekeeper.

5 (c) Bank or Express Messenger Have and carry concealed while so employed by a messenger employed by a banking institution or express company. (d) Justice of The Supreme Court 1st or 2nd Judicial Dept. or Judge of NYC Civil or Criminal Court . Have and carry concealed by a justice of the supreme court in the first or second judicial departments, or by a judge of the new york City civil court or the new york City criminal court. (e) Employee Of Corrections Have and carry concealed while so employed by a regular employee of an institution of the state, or of any county, city, town or village, under control of a commissioner of correction of the city or any warden, superintendent or head keeper of any state prison, penitentiary, workhouse, county jail or other institution for the detention of persons convicted or accused of crime or held as witnesses in criminal cases, provided that application is made therefore by such commissioner, warden, superintendent or head keeper.

6 (f) Proper Cause Have and carry concealed, without regard to employment or place of possession, by any person when proper cause exists for the issuance thereof. (g) Antique Pistols Have, possess, collect and carry antique pistols which are defined in section subd. 2(i)(ii)(1)(2). From the new york State Police FAQs. Q - What section of the Penal Law authorizes the placing of restrictions on pistol permits by the issuing authority? The Penal Law does not specifically authorize the placing of restrictions on pistol permits. However, court decisions have consistently supported the ability of licensing officials to impose these restrictions. Such an imposition is an administrative function of the licensing officer. Licensees in violation of these restrictions would therefore not be subject to criminal prosecution but would face action being taken by the court of issuance in the form of suspension or possible revocation of the license.

7 Note: Only a Qualified Retired Law Enforcement Officer or Unrestricted License are full carry licenses. Pen. Law Licenses to carry, possess, repair and dispose of firearms. 1. Eligibility. No license shall be issued or renewed pursuant to this section except by the licensing 2. officer, and then only after investigation and finding that all statements in a proper application for a license are true. No license shall be issued or renewed except for an applicant (a) twenty-one years of age or older, provided, however, that where such applicant has been honorably discharged from the United States army, navy, marine corps, air force or coast guard, or the national guard of the state of new york , no such age restriction shall apply.

8 (b) Be of good moral character. (c) who has not been convicted anywhere of a felony or a serious offense;. (d) who is not a fugitive from justice;. (e) who is not an unlawful user of or addicted to any controlled substance as defined in section 21 802;. (f) who being an alien (i) is not illegally or unlawfully in the United States or (ii) has not been admitted to the United States under a nonimmigrant visa subject to the exception in 18 922(y)(2);. (g) who has not been discharged from the Armed Forces under dishonorable conditions;. (h) who, having been a citizen of the United States, has not renounced his or her citizenship;. (i) who has stated whether he or she has ever suffered any mental illness;. (G) Be at least twenty-one years of age or older, provided, however, that where such applicant has been honorably discharged from the United States Army, Navy, Marine Corps, Air Force or Coast Guard, or the National Guard of the State of new york , no such age restriction shall apply.

9 (H) Who has not had a license revoked or who is not under a suspension or ineligibility order issued pursuant to the provisions of section of the criminal procedure law or section 842(a) of the family court act. (I) Anyone who has not been convicted of a misdemeanor crime of domestic violence. (j) who has not been involuntarily committed to a facility under the jurisdiction of an office of the department of mental hygiene pursuant to article nine or fifteen of the mental hygiene law, article seven hundred thirty or section of the criminal procedure law, section four hundred two or five hundred eight of the correction law, section or of the family court act, or has not been civilly confined in a secure treatment facility pursuant to article ten of the mental hygiene law.

10 (k) who has not had a license revoked or who is not under a suspension or ineligibility order issued pursuant to the provisions of section of the criminal procedure law or section eight hundred forty-two-a of the family court act;. (l) in the county of Westchester, who has successfully completed a firearms safety course and test as evidenced by a certificate of completion issued in his or her name and endorsed and affirmed under the penalties of perjury by a duly authorized instructor, except that: (i) persons who are honorably discharged from the United States army, navy, marine corps or coast guard, or of the national guard of the state of new york , and produce evidence of official qualification in firearms during the term of service are not required to have completed those hours of a firearms safety course pertaining to the safe use, carrying, possession, maintenance and storage of a firearm. 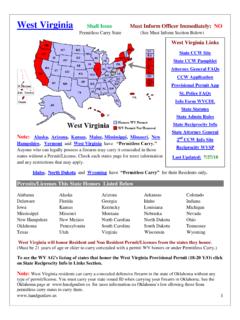 www.handgunlaw.us 2 Note: West Virginia is a Permitless Carry state and any resident or non-resident who is 21 or older who can legally possess a firearm can carry it concealed in West Virginia without any type of permit/license. 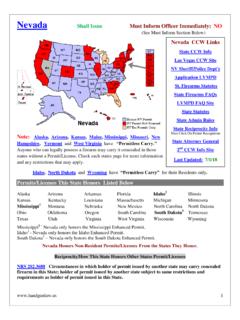 www.handgunlaw.us 2 1. Except as otherwise provided in subsection 2, a person who possesses a permit to carry a concealed firearm that was issued by a state included in the list prepared pursuant to NRS 202.3689 may carry a

Maryland May Issue Must Inform Officer …

www.handgunlaw.us 6 Yes, under Title 18, Section 926A, of the United States Code, a person who is not prohibited from possessing, transporting, shipping, or receiving a firearm shall be entitled to transport a firearm for any

www.handgunlaw.us 1 Texas Shall Issue Must Inform Officer Immediately: YES (See Must Inform Section Below) Note: Alaska, Arizona, Kansas, Maine, Mississippi, Missouri, New Hampshire, Vermont and West Virginia have “Permitless Carry.” Anyone who can legally possess a firearm may carry it concealed in those

Tennessee Shall Issue Must Inform Officer …

www.handgunlaw.us 2 current list of states honoring permits issued by the state of Tennessee and shall make the list available to anyone upon request. 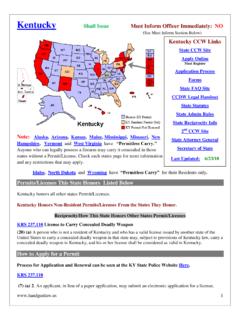 Kentucky Shall Issue Must Inform Officer …

www.handgunlaw.us 2 renewal of a license and an Emergency Protective Order License to carry a concealed deadly weapon to the Department of Kentucky State Police.

Connecticut May Issue Must Inform Officer …

www.handgunlaw.us 1 Connecticut May Issue Must Inform Officer Immediately: NO (See Must Inform Section Below) Note: Alaska, Arizona, Kansas, Maine, Mississippi, Missouri, New Hampshire, Vermont and West Virginia have “Permitless Carry.” Anyone who can legally possess a firearm may carry it concealed in those

Mississippi Shall Issue Must Inform Officer … 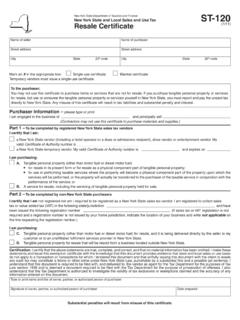 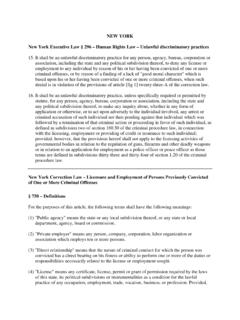 This packet contains a legal document, a New York Health Care Proxy and Living Will, that protects your right to refuse medical treatment you do not want, or to request

notify you that you are registered to vote. If we are unable to verify your identity before Questions? Green party Working Families party Independence party 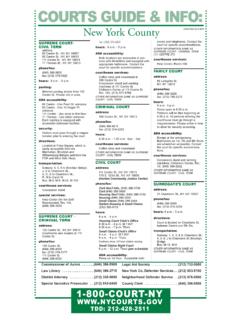