2 Use of proceeds of the financing will focus on further engineering work to improve project confidence while the Company completes the senior project financing package for the Prairie Creek Mine and establishes the construction and development management team. The Project Bridge Loan will bear interest at the rate of 8%, payable quarterly, and will mature on January 31, 2019. The loan is secured by a charge on the Prairie Creek property and contains customary affirmative and negative covenants and events of default. The Investor Agreement with RCF VI contains various rights granted to RCF VI, including among other things: a period of exclusivity to work with the Company to define the terms of RCF VI's future participation in the project financing of the Prairie Creek Mine, on terms and conditions to be agreed by the Company and RCF VI; participation rights in favor of RCF VI to maintain its pro rata shareholding interest in the Company for as long as it remains a significant shareholder; the right to nominate one member to the board of directors of the Company; and certain other project oversight rights.

3 RCF VI and Canadian Zinc remain in discussions regarding the further participation of RCF VI in future project financings, including any project development facility, which participation may be subject to receipt of shareholder approval if required by any regulatory authority and approval of the Toronto Stock Exchange, and certain other conditions. John Kearney, Canadian Zinc's Chairman and CEO, commented, This financing commitment from RCF is a strong vote of confidence in the Prairie Creek project by the Company's largest 1. shareholder RCF VI, a fund managed by RCF, a highly respected mining finance group. The Investor Agreement with RCF VI provides the way forward to put in place the senior project financing to maintain the momentum directed at completing construction of the Project and bringing the Prairie Creek Mine into production by mid-2020.

4 Ross Bhappu, Head of Private Equity Funds at RCF said, RCF VI's financial support has actively helped multiple global mining projects move into production over the past 5 years and RCF is excited to be working with Canadian Zinc as a financial and technical partner to support the construction of Prairie Creek, a future zinc, lead and silver source which we believe will be important to supply . Resource Capital Funds ( RCF ) is a group of commonly managed private equity funds, established in 1998 with a mining sector specific investment mandate spanning all hard-mineral commodities and geographic regions. Since inception, RCF has supported 166 mining companies, with projects located in 51 countries and across 29 commodities.

5 The sixth fund, Resource Capital Fund VI ( RCF VI ) with committed capital of $ billion, is now being invested. Further information about RCF can be found on its website ( ). RCF. aims to partner with companies to build strong, successful and sustainable businesses and in doing so strives to earn superior returns for all shareholders. RCF VI currently holds of Canadian Zinc's shares. Project Financing CZN has retained HCF International Advisers Limited ( HCF ), a leading corporate finance firm based in London, UK and focused on the global natural resources and infrastructure sectors, as its adviser in securing bank debt or other project debt financing for the construction of the Prairie Creek Mine and HCF is currently engaged in advanced discussions with several finance providers.

6 It is anticipated that up to 70% of the estimated capital required to complete the Project could be supported by debt financing. Sandstorm Gold Ltd. ( Sandstorm ), which provides financing to mining companies through stream and royalty agreements, currently holds a net smelter returns royalty ( NSR ) on the Prairie Creek Mine which it purchased in 2013 for US$10 million. In addition, as part of the Royalty Agreement, Sandstorm has a right of first refusal to purchase any metal stream based on production from the Prairie Creek property that Canadian Zinc may decide to sell to finance part of the capital cost to develop the Prairie Creek Mine.

7 In connection with the Project Bridge Loan and the Royalty Agreement, Sandstorm and RCF have agreed to enter into an Inter-Creditor Agreement reflecting certain agreed intercreditor principles. Feasibility Study Highlights On September 28, 2017 Canadian Zinc announced the preliminary results of its 2017 Feasibility Study ( 2017 FS ) which indicate notable improvements compared to the Preliminary Feasibility Study completed in 2016 ( 2016 PFS ) and confirm that the Prairie Creek Mine can support a significant increase in the mining rate and mill throughput that will enable production of higher quantities of zinc, lead and silver, and at lower operating cost as compared to the mine plan presented in the 2016 PFS.

8 The Capital cost was estimated at $279 million, including contingency. 2. The development and construction period is estimated at years and, subject to completion of financing, the start-up of mine production is projected for mid-2020. The 2017 FS Mine Plan covers a 15-year LOM from mill start-up with a focus on optimizing the LOM grade profile. During the first 10 years of production, the expanded mill throughput results in the following as compared to the 2016 PFS: Higher average annual metal production (zinc 95M lbs. and lead 105M lbs.). Average annual total contained lead in both zinc and lead concentrates is 105 million pounds per year, an increase of 23 million pounds, while the average annual production of silver is also increased 25% to million ounces per year.

10 To $279 million, including contingency, primarily because of the expansion in mine and mill throughput and accelerated mine development. The post-tax payback period was reduced by five months to years from mill start-up. A Technical Report Study prepared in accordance with National Instrument 43-101 Standards for Disclosure for Mineral Projects ( NI 43-101 ) reporting the results of the 2017 Feasibility was filed on SEDAR on October 31, 2017. 3. For further information contact: John F. Kearney Alan B. Taylor Steve Dawson Chairman & Chief Vice President Exploration Vice President Executive & Chief Operating Officer Corporate Development (416) 362-6686 (604) 688-2001 (416) 203-1418. 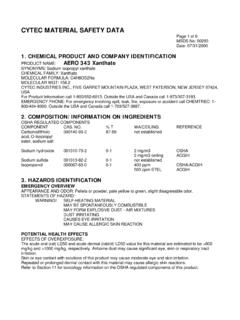 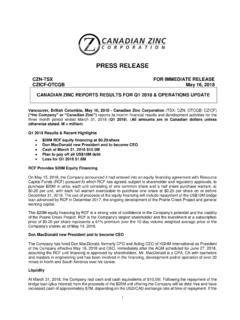 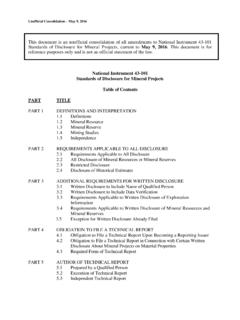 Unofficial Consolidation – May 9, 2016 This document is an unofficial consolidation of all amendments to National Instrument 43-101 Standards of Disclosure for Mineral Projects, current to May 9, 2016. 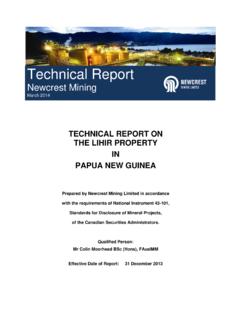 MAG : TSX / NYSE A Mineral Processing Metallurgical test work carried out between 2008 and 2015 on composites from 67 drillholes through the Valdecañas vein system.