THE COASTAL FORCES HERITAGE TRUST Chairman’s Letter This is my first letter as Chairman of the trust, having taken over from Sir Derrick Holden-brown in July.

2 Outgoing Chairman Sir Derrick office for details. The Refit Of Hdml 1387 (Medusa). Holden-Brown has been succeeded by A detailed analysis of those receiving Notice Board John Ascoli, a Trustee of many years copies of this Newsletter has shown Dvd Documentary standing. Sir Derrick has also stood that there are still a number of Models Of Coastal Forces Boats 8. Uk Military Cemeteries down as a Trustee. Secondly, this issue recipients who have so far been unable Cfht Website contains an extra four pages in order to to make a donation to support the Quick Quiz introduce the long awaited historical work of the Trust.

3 There has been an Making History documentary DVD film entitled A enthusiastic response to the Newsletter Portsmouth to Malta 1937 9-10. History of the Royal Navy's Coastal and many readers have said how much Forces . A cover picture and summary they enjoy reading it. So the Trustees Special Features Polish Free Forces of the contents of the film are on pages would just like to gently remind all 11-13. E-Boats At Felixstowe - May 1945. 15 & 16, together with details of how to who receive it to check that they are Lives In Brief order your copy. Supporters should note also financial supporters of the Trust.

4 In Memoriam that a special price is on offer for them The future of the Newsletter depends Stop Press 14. so long as they place their orders by 31 on that total support. December 2010. AND you may order as many copies as you like. As usual, this Issue reports on those CF boats from WW2 which can still be seen by the general public. Two, MTB. 81 and HDML 1387(Medusa), are now based at Gunwharf Quays in Portsmouth and it is hoped Medusa will be at Hornet for the Remembrance Service in November. It is worth remembering that Medusa, MTB 102 and Gay Archer each right MTB 1939 Thornycroft 74ft THE Coastal Forces HERITAGE TRUST.

5 Change of Chairman Many members of the Coastal Forces fraternity will be sorry that Sir Derrick left John Ascoli Holden-Brown has stood down as Chairman of the CFHT. He has been a tireless worker for Coastal Forces for many years, even before the Trust was founded. Anyone who has read Gunboat 658 will know he served with distinction as Navigator and 1st Lt in Dog Boats in the Med, first with the Canadian CO Tom Ladner, in MGB 661. Eighteen months later, after 661 below Sir was mined south of Venice, he was appointed CO of MTB 655, only to be Derrick mined once again in the Dalmation Islands.

6 Wounded and invalided home, Holden-Brown he finished the war in the Coastal Forces section at the Admiralty. In spite of an exceptionally busy and successful business career culminating in a knighthood for services to the food and drink industry, Sir Derrick gave a great deal of time to Naval affairs as Chairman of both the White Ensign Association and the Portsmouth Naval Heritage Trust. The CFHT has been extremely fortunate to benefit from his leadership and unstinting efforts to further the history and memory of Coastal Forces and to ensure its heritage will not be forgotten.

7 He is succeeded by John Ascoli, who has been a Trustee for ten years and is the Trust's current representative on the Council of the Royal Naval Museum. As the son of a distinguished wartime Dog Boat CO, with his passion for CF history, well known to former CFVA members, and having done his post-war National Service in Coastal Forces at Hornet, he is ideally placed to take on this demanding role. Euan Strathcona & Len Reynolds Chairman's Letter This is my first letter as Chairman of the Trust, having taken over same determination as my predecessor. Many will have met from Sir Derrick Holden-Brown in July.

8 As a founding member me as a Trustee over the past ten years and I hope to meet of the Trust Sir Derrick made a major contribution over sixteen others as we go about the Trust's business. You will read in years, both as a Trustee and for several years as the Chairman, this Newsletter both of our recent achievements and of the for which all those involved in the Trust are immensely grateful. objectives which lie before us. It is without doubt a time of It is a great privilege for me to take over the reins of a change but, above all, we desperately need your support to meet successful and ambitious organisation with the intention of new and quite exciting goals and I thank you in anticipation of moving forward to meet clearly defined objectives with the that continued backing, both moral and financial.

9 Director's Report I must start by thanking all those who attended the on pages 15 and 16. Please give particular attention to this, as Commemorative events at Falmouth and Dover. Both went a special offer is available for the purchase of the DVD for a well and are covered in detail in this Newsletter . None of our short period, and you can have as many copies as you wish. activities would amount to much without the vital support Now for the future. As you know, the main aim of the Trust of those who can make it to these occasions. These two last is the establishment of a permanent exhibition of Coastal Forces .

10 Plaque dedications, the eleventh and twelfth, mark the end of Our intention that this should be in the Royal Naval Museum this particular project. Also coming to completion is the DVD is at last moving forward at a faster pace. It has been a difficult documentary on the story of Coastal Forces which, although period for the RNM while it has been establishing itself within long overdue, is now available and you will find ordering details the new structure of The National Museum of the Royal Navy. KEEP THE SPIRIT ALIVE . Now that has been achieved and the Museum has re-bid for a Both the commemorative plaque programme and the development Grant for its Twentieth Century naval exhibition. 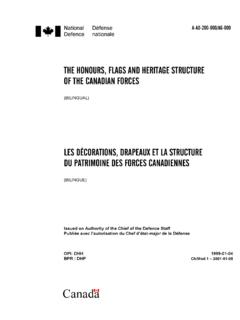 THE HONOURS, FLAGS AND HERITAGE STRUCTURE … 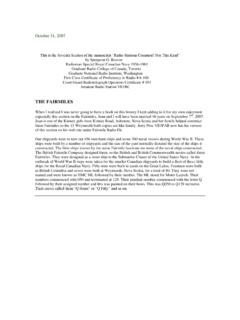 Canadian Armed Forces This is Weymouth built HMC ML120 off the approaches to Halifax, Nova Scotia, under full power. Actually these Canadian shipyards built eighty-eight of these little ships and eight were turned over to the 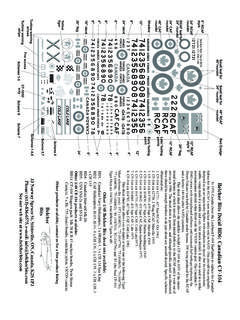 Page 2 of 8 CF-104 Starfighters in Service Initially, the Canadian No.1 Air Division in Europe was organized in wings; 1 Wing (Marville, France) with 439 and 441 Sqns, 2 Wing 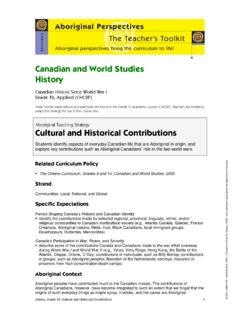 6 case management and the canadian Health care system In the Romanow report (2002), Building on Values e Future of Health Care in Canada, a recommendation is made that the Canada Health Act be expanded to include coverage for three priority