3 The Headquarters of the Agency are situated in Vienna. Its principal objective is to accelerate and enlarge the contribution of atomic energy to peace, health and prosperity throughout the world .The following States are Members of the International Atomic Energy Agency:IAEA TRAINING COURSE SERIES NO. 52 TRAINING GUIDELINES IN NON- destructive Testing Techniques: LEAK Testing AT LEVEL 2 INTERNATIONAL ATOMIC ENERGY AGENCYVIENNA, 2012 COPYRIGHT NOTICEAll IAEA scientifi c and technical publications are protected by the terms of the Universal Copyright Convention as adopted in 1952 (Berne) and as revised in 1972 (Paris). Th e copyright has since been extended by the World Intellectual Property Organization (Geneva) to include electronic and virtual intellectual property.

4 Permission to use whole or parts of texts contained in IAEA publications in printed or electronic form must be obtained and is usually subject to royalty agreements. Proposals for non-commercial reproductions and translations are welcomed and considered on a case-by-case basis. Enquiries should be addressed to the IAEA Publishing Section at: Marketing and Sales Unit, Publications Section International Atomic Energy Agency Vienna International Centre PO Box 100 1400 Vienna, Austria fax: +43 1 2600 29302 tel.: +43 1 2600 22417 email: further information on this publication, please contact:Industrial Applications and Chemistry SectionInternational Atomic Energy AgencyVienna International Centre1400 WienAustriaTRAINING GUIDELINES IN NON- destructive Testing TECHNIQUES: LEAK Testing AT LEVEL 2 IAEA, VIENNA, 2012 IAEA/TCS/52 ISSN 1018 5518 IAEA, 2012 Printed by the IAEA in AustriaMarch 2012 FOREWORD The International Atomic Energy Agency (IAEA) has been active in the promotion of non- destructive Testing (NDT) technology for many decades.

5 The prime reason for this interest has been the need for stringent standards for quality assurance for safe operation of nuclear and other industrial installations. The IAEA successfully executed a number of programmes, including technical cooperation projects (national and regional) and coordinated research projects (CRPs), in which NDT was an important part. Through these programmes, a large number of personnel have been trained in Member States, leading to the establishment of national certifying bodies responsible for the training and certification of NDT personnel. Consequently, a state of self-sufficiency in this area of technology has been achieved in many Member States.

6 All along there has been a realization of the need to have well established training guidelines, in order to orient the IAEA experts who were involved in training and certification programmes, and to achieve some level of international uniformity and harmonization of training materials and certification processes, and consequent competence of NDT personnel. The syllabi for training courses were published in the form of IAEA TECDOC publications. The first was IAEA-TECDOC-407 (1987), which contained the syllabi for liquid penetrant Testing , magnetic particle Testing , eddy current Testing , radiographic Testing and ultrasonic Testing methods.

7 To accommodate progress in NDT technology, revised versions of this TECDOC were published in 1991, 2002 and 2008. The current version ( IAEA-TECDOC-628 (2008)) includes additional and more advanced NDT methods. That TECDOC, as well as most of the international standards on the subject of training and certification of NDT personnel, including ISO 9712 (2005), defines three levels of competence. Among these, Level 1 is the lowest and Level 3 is the highest. The intermediate Level 2 is considered to be the most appropriate for personnel who, besides other duties, are expected to: independently undertake practical Testing in the relevant method of NDT; develop NDT procedures to address various problems; prepare written instructions; make accept/reject decisions in accordance with relevant standards and specifications; organize and report NDT results; and train and supervise Level 1 personnel.

8 The next logical step after finalizing the syllabi was to compile textbooks and training manuals in accordance with the syllabi. Manuals on liquid penetrant Testing , magnetic particle Testing , radiographic Testing , ultrasonic Testing and eddy current Testing have already been published in the IAEA s Training Course Series. These play a vital role for training and certification of NDT personnel throughout the world. Compilation of the present book is a continuation of that effort. The first draft was developed with the help of experts from the Canadian Institute for Non- destructive Evaluation (CINDE). The introduction to basic NDT methods, materials, manufacturing processes and defects, and quality assurance common to all the NDT methods, has been adapted from previous publications in the Training Course Series.

9 The IAEA wishes to express its appreciation to all those who contributed to the production of this publication. The IAEA officers responsible for this publication were Joon-Ha Jin, Khan and Rao of the Division of Physical and Chemical Sciences. EDITORIAL NOTE The use of particular designations of countries or territories does not imply any judgement by the publisher, the IAEA, as to the legal status of such countries or territories, of their authorities and institutions or of the delimitation of their boundaries. The mention of names of specific companies or products (whether or not indicated as registered) does not imply any intention to infringe proprietary rights, nor should it be construed as an endorsement or recommendation on the part of the IAEA. 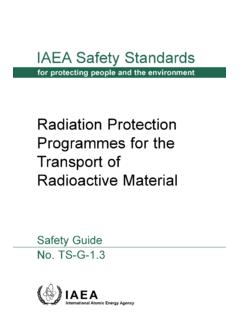 OBJECTIVE AND ESSENTIAL ELEMENTS OF A … 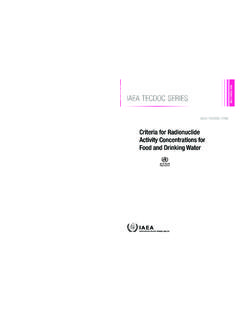 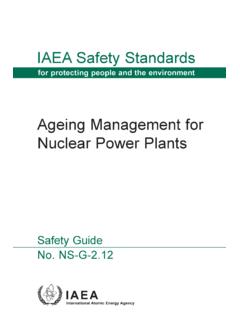 Non-Destructive Testing of Concrete: A Review of …

ASME CODE FOR ULTRASONIC TESTING THE …

Guidebook for the Fabrication of Non-Destructive …

FOREWORD The International Atomic Energy Agency (IAEA) is promoting the industrial applications of radiation technology, which include non-destructive testing (NDT) under its

BEST PRACTICE FOR THE PROCUREMENT AND …

7/17/2012 8 | Page EXEMPT MATERIALS The table below documents the materials that do not require Prop 65 Lead Testing.

RR659 - Evaluation of the effectiveness of non …

7 1. INTRODUCTION 1.1 Background A wide range of engineering plant is subject to periodic in-service inspection in order to ensure continued safe and economic operation.