NOTARY HANDBOOK - Secretary of State of …

3 I. Purpose of the Notary Handbook This handbook has been prepared by the office of the Secretary of State for current and prospective notaries public in the state …

3 36. e-Notarization Basics .36. Electronic Signatures .37. Use of a Journal .37. How to use electronic NOTARY signatures 38. XV. Colorado Secretary of State Contact Information .. 38. Revised: January 17, 2018. 2. I. Purpose of the NOTARY HANDBOOK This HANDBOOK has been prepared by the office of the Secretary of State for current and prospective notaries public in the State of Colorado. As a NOTARY public, you hold an important position; therefore, it is vital that you understand the NOTARY duties and responsibilities with which you have been charged.

4 The purpose of this HANDBOOK is to help familiarize you with Colorado NOTARY Law so that you can perform your duties correctly. The HANDBOOK is updated to include changes in the law that will be made effective July 1, 2018, due to the adoption of the Revised Uniform Law on Notarial Acts (RULONA). Notaries public are authorized to perform certain official duties that are critical to those who need them. By acting as an agent of the State by notarizing documents, you help to prevent fraud and forgery. Because the work of notaries public is so important, please make sure you take the time to review this guide carefully.

5 It is critical for you to understand the obligations of being a NOTARY public and for you to perform those duties in a manner that merits the trust, confidence, and respect appropriate to the office. Please note that this HANDBOOK is merely a guide to best practices, but RULONA is the law on which the HANDBOOK is based. Accordingly, all incongruities between the HANDBOOK and the statute will be decided in favor of the statute ( 24-21-501 et seq.). Notaries are responsible for keeping themselves apprised of changes in the law that may affect the manner in which they perform notarizations.

6 Throughout this HANDBOOK , RULONA will be referenced where the new law is the same or very similar to the current law, the Notaries Public Act ( 12-55-101, et seq.). Where there are distinctions between RULONA and the Notaries Public Act (Act), those distinctions will be noted. The Colorado NOTARY law and other resources for notaries are available on the NOTARY Home page of the Secretary of State 's website: II. What is a NOTARY ? NOTARY or NOTARY Public means an individual appointed and commissioned to perform a notarial act by the Secretary of State ( 24-21-502(8)).

7 A Notarial Officer means a NOTARY public or other individual authorized to perform a notarial act ( 24-21- 502(7)). Because the definition in the Colorado Revised Statutes is so brief, the following information has been included to further describe what a NOTARY is. Various definitions/synonyms for NOTARY public can be drawn from other states ' statutes. The following list is representative rather than all-inclusive. A NOTARY is a verifier, authenticator, person of integrity appointed to the office, person commissioned to seal documents, impartial agent for the 3.

8 State , public recorder of acts, public servant. The NOTARY acts as an unbiased/disinterested/official WITNESS, to the identity of the person who signs a document. In this context, while notarizing, a NOTARY is responsible not to a customer or a supervisor, but to the people of the State of Colorado through the Secretary of State , the elected representative of those people. III. What are a NOTARY 's Powers? NOTE: This is an area of distinction between The Act and RULONA. For notaries, powers are equivalent to duties. Under the Act, Colorado notaries have three powers, or duties, that every NOTARY should know and be able to perform.

9 The Act ( 12-55-110(1)) lists the NOTARY powers/duties and divides them under seven subsections ((a)-(f), including ( )). The three main powers that the NOTARY will be exercising are (1) the administration of oaths and affirmations, (2) acknowledgments, and (3) copy certifications. It is important to note that NOTARY laws vary from State to State , sometimes widely. Some states ' notaries have only two powers, and some have four or five. Under the Act, Colorado notaries have a little-known fourth power that is rarely and then usually improperly exercised.

10 Though it is rare that a NOTARY would be asked to perform the duty of notices of dishonor, a discussion on the power may be found below. Under RULONA, Colorado notaries have four common powers. RULONA ( 24- 21-505) lists the NOTARY powers/duties under five subsections. The four main powers that the NOTARY will be exercising are (1) acknowledgments, (2) the administration of oaths and affirmations, (3) copy certifications, and (4) witness or attest to signatures. Under RULONA, there is a fifth power referred to as making or noting a protest of a negotiable instrument, but it is only bestowed upon notaries who are employed by a financial institution, and who are acting in the course and scope of that employment. 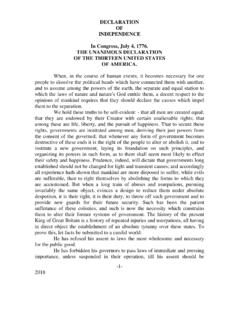 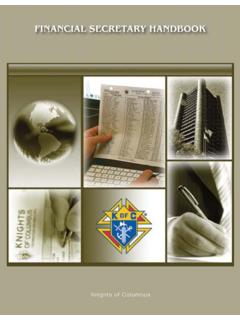 — FOREWORD — FINANCIAL SECRETARY HANDBOOK The financial secretary is an integral part of the structure of the Knights of Columbus. His important role is underlined by the fact that he is not 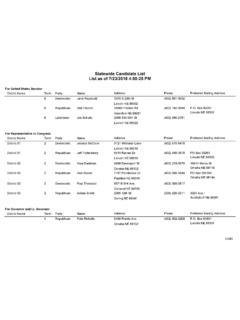 Instructions for Registering to Vote Using this Application 1. Complete the application only if you check ‘yes’ to questions 1 and 2. 2. Use this application to register to vote in Nebraska or to update your name,