Copyright 2020 by Thomas L. Constable Notes on 2 Corinthians 2020 Edition Dr. Thomas L. Constable HISTORICAL BACKGROUND First Corinthians did not dispel the problems in the church at Corinth completely. While it resolved some of them, opposition to the Apostle paul persisted, and paul 's critics continued to speak out against him in the church. One man in particular seems to have been the ringleader of the opposition (10:7-11). He had rallied the support of a significant minority.

2 Dr. Constable's Notes on 2 Corinthians 2019 Edition to meet Titus, who was taking the land route from Corinth back to Ephesus, Paul moved west into Macedonia (2:12-13).

1 Copyright 2020 by Thomas L. Constable Notes on 2 Corinthians 2020 Edition Dr. Thomas L. Constable HISTORICAL BACKGROUND First Corinthians did not dispel the problems in the church at Corinth completely. While it resolved some of them, opposition to the Apostle paul persisted, and paul 's critics continued to speak out against him in the church. One man in particular seems to have been the ringleader of the opposition (10:7-11). He had rallied the support of a significant minority.

2 The issue was paul 's apostolic authority. His critics were claiming equal authority with paul . This was in effect a claim to apostolic authority, on their part, and or a denial of the full apostolic authority of paul . News of continuing problems in Corinth reached paul , in Ephesus, during his prolonged stay there on his third missionary journey. He then made a brief visit to Corinth. However, his efforts to resolve the conflicts proved unsuccessful (2:1; 12:14; 13:1-2). paul apparently suffered insult and he lost face during that visit (7:12).

3 Consequently, that was a painful visit for paul . He then returned to Ephesus. paul 's next step, in dealing with the situation in Corinth, was to send a "severe letter" from Ephesus by the hand of titus and another unnamed brother (2:3-4; 7:8-12; 12:18). He apparently directed this letter, now lost, at the party opposed to him and particularly its leader. Some commentators believe that 2 Corinthians 10 13 contains part or all of this letter, but the evidence for this is not paul evidently intended to receive titus ' report, concerning the effects of this "severe letter," in Ephesus.

4 However, persecution there made it expedient for paul to leave that city earlier than he had anticipated (Acts 1 See Richard Batey, " paul 's Interaction with the Corinthians ," Journal of Biblical Literature 84 (1985):139-43. 2 Dr. Constable's Notes on 2 Corinthians 2020 Edition 20:1). He found an open door for the gospel to the north in Troas. Eager to meet titus , who was taking the land route from Corinth back to Ephesus, paul moved west into Macedonia (2:12-13). There titus met him and gave him an encouraging report (7:6-16).

5 Most of the church had responded to paul 's directives, and the church had disciplined the troublemakers (2:5-11). Unfortunately, some in the congregation still refused to acknowledge paul 's authority over them (10:1 13:10). Many scholars have tried to explain the different subject matter and tone of chapters 10 13, as compared with chapters 1 9. Some believe chapters 10 13 were a separate letter, specifically: paul 's "severe letter." Others argue that it was originally part of 2 Corinthians , and that paul wrote the whole book at one time.

7 However, his concern for the unrepentant minority, and his desire to pick up the money the Corinthians had begun to collect for their poorer brethren in Jerusalem, led him to write 2 Corinthians . Along with these primary motives, paul also felt compelled to refute the charge of fickleness leveled at him by his critics. He had changed his travel plans and had not come to see them, as he had originally said he wanted to do. The whole situation provided him an opportunity to clarify the nature of Christian ministry.

9 It is very difficult to reconstruct the details of paul 's activities, since the data available to us is incomplete. paul 'S CORINTHIAN CONTACTS paul 's first visit His "former letter" Their letter to him 1 Corinthians paul 's "painful visit" His "severe letter" 2 Corinthians paul 's future visit 1 See Donald A. Carson and Douglas J. Moo, An Introduction to the New Testament, pp. 430-36. See Kenneth G. Hanna, From Gospels to Glory, pp. 209-11, for further discussion of the unity of the epistle.

10 4 Dr. Constable's Notes on 2 Corinthians 2020 Edition Another view is that the "former letter" is 1 Corinthians , and "the offender" (2 Cor. 2:5; 7:12) is the incestuous man of 1 Corinthians 5 "According to this view, there was 'no painful visit,' for the word 'again' in 2:1 does not necessarily mean that paul made a visit between writing First and Second Corinthians . It simply means he did not want to return 'in sorrow.' The reference in 12:14 and 13:1, 2 to a 'third time' does not mean paul was coming for his third time; it simply means that he was 'ready to come for a third time. 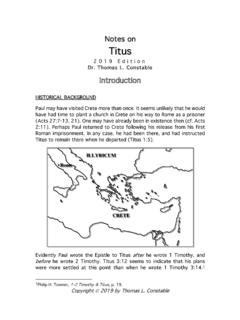 Epistle to Titus before either 1 Timothy or 2 Timothy.2 Titus was a Greek Gentile (Gal. 2:3). He had probably become a Christian under the influence of Paul, and subsequently became one of the apostle's protégés (Titus 1:4). Titus had been with Paul since the apostle's early ministry. He accompanied Paul and Barnabas on their mission of 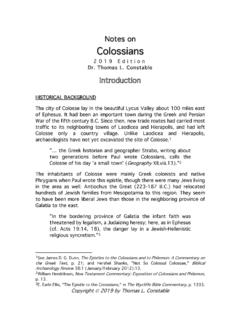 2019 Edition Dr. Constable's Notes on Colossians 5 epistle (4:7-14). This view of the letter's origin generally fits the facts better than the Caesarean and Ephesian theories of origin. 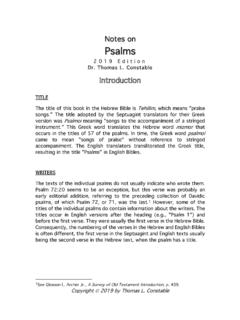 Of these psalms, the earliest would have been the one Moses wrote (Ps. 90), and it probably dates from about 1405 B.C. Those David composed would have originated between about 1020 and 975 B.C. Asaph was a contemporary of David, so we can date his in approximately the same period. Solomon's psalm(s) seem to have been produced 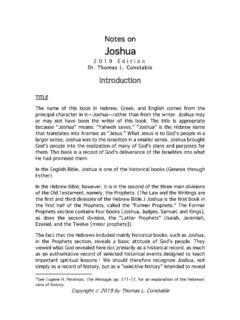 2 Dr. Constable's Notes on Joshua 2017 Edition DATE AND WRITER The Book of Joshua evidently came into existence several years after the events recorded in the book took place. A number of statements point to a time of composition beyond the 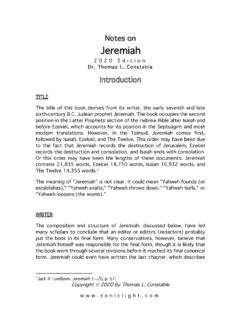 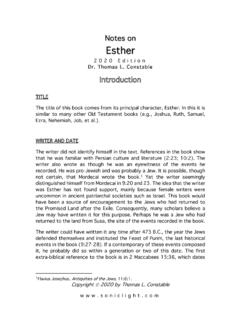 4 Dr. Constable's Notes on Esther 2017 Edition recorded event in Esther is the institution of the Feast of Purim that took place in 473 B.C. Therefore the events recorded in the book span a … 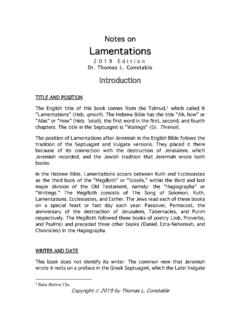 2019 Edition Dr. Constable's Notes on Lamentations 3 with the grief of the 'I am the man who has seen affliction' (3:1)."1 Almost all Lamentations scholars believe the date of composition fell 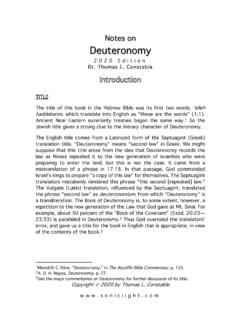 6 Dr. Constable's Notes on Deuteronomy 2019 Edition GENRE Like the other books of the Pentateuch, Deuteronomy is essentially a narrative document that was written to teach theology.