5 Where further information for the Russian federation is available, it is presented on the following page. Additional information, including the data used in this country note, can be found at: 1. Change in the Russian Federations' average well-being over the past 10 years Dimension Description Change Household net adjusted disposable income increased by 11% between Income and wealth 2011 and 2014, but remains considerably lower than the OECD average . level. The employment rate has risen by 6 percentage points since 2005, compared to points for the OECD on average. At in 2016, the . Jobs and earnings long-term unemployment rate has almost halved from 2005 ( ), while . job strain has improved by more than 8 percentage points over the past decade.. The average number of rooms per person has remained stable over the past 10 years.

6 Basic sanitation has improved: the share of households . Housing lacking an indoor flushing toilet has fallen from to Housing conditions has become more affordable since 2011, with the average share of . household disposable income spent on housing costs falling by . 1 percentage point. Work- life At just below , the share of employees working 50 hours or more per balance week in 2016 is very similar to the level reported in 2005.. The 10-year change in life expectancy at birth cannot be assessed, due Health status to a recent break in the data. However, between 2005 and 2013 life expectancy increased by 5 years. The percentage of adults reporting to . be in good or very good health has also increased, by 6 points . between 2012 and 2016. Education and Over the last 10 years, the percentage of adults attaining an upper skills secondary level of education increased by over 4 points.

7 Social support has increased, with the share of the population reporting Social connections that they have relatives or friends whom they can count on to help in case . of need rising from 86% to 90%. At 65%, voter turnout in the 2012 presidential elections was considerably Civic engagement lower than in 2008 (70%), with a stronger decline than for the OECD . average. Environmental The percentage of people satisfied with their local water quality is currently 24 points higher than 10 years ago. However, annual exposure . quality to air pollution has remained relatively stable over the past decade.. The homicide rate fell from 25 deaths per 100 000 in 2005 to in 2011. Personal (the latest available year). The proportion of people declaring that they . security feel safe when walking alone at night has increased by 25 percentage points.

8 Average levels of life satisfaction have increased from (on a 0 to 10. Subjective well- being scale) to over the past decade.. Note: For each indicator in every dimension: refers to an improvement; indicates little or no change; and signals deterioration. This is based on a comparison of the starting year (2005 in most cases) and the latest available year (usually 2015 or 2016). The order of the arrows shown in column three corresponds to that of the indicators mentioned in column two. 2. The Russian federation 's resources and risks for future well-being: Illustrative indicators Natural capital Human capital Equivalent Equivalent Indicator Change Indicator Change OECD tier OECD tier Greenhouse gas emissions from Young adult educational domestic production 2005-2015 attainment 2010-2015. 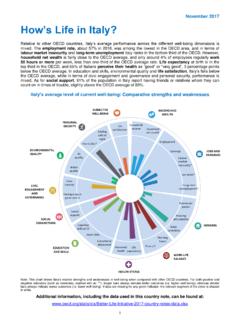 1 November 2017 How’s Life in Italy? Relative to other OECD countries, Italy’s average performance across the different well-being dimensions is