3 We suggest strict adherence to infection control procedures be undertaken to minimise infection risk when using button hole technique for cannulation. (Level III evidence). Patients should be instructed on the care of the arteriovenous fistula / arteriovenous graft between cannulation sessions in particular: (Level III evidence). Vein preservation: avoidance of cannulation in the effected limb How to check for patency: clinical monitoring of bruit and thrill Observing the site for signs of infection The importance of identifying and reporting problems with vascular access Adherence to good personal hygiene Observe for signs of steal syndrome: hand going pale/blue, cold, with/out pain IMPLEMENTATION AND AUDIT.

4 Conduct annual auditing of Staphylococcus aureus bacteraemia rates. Data for Methycillin Resistant Staphylococcus Aureus (MRSA), Vancomycin Resistant Enterococcus (VRE) and Extended Spectrum Beta-Lactamase (ESBL) should be included. Rupture of vascular access ( fistula and graft ), and complication rates of all vascular accesses within the unit should be recorded and reviewed regularly. Accredited staff training and education in infection control needs to be a mandatory requirement for all staff working with vascular access patients. Strict adherence to infection control policy must be promoted and evaluated regularly within the unit.

5 _____. Vascular Access July 2012 Page 1 of 23. Accredited ongoing staff training and education in cannulation technique should be undertaken by all staff accessing arteriovenous fistulae or grafts. BACKGROUND. An effective haemodialysis treatment is dependent on a well-functioning vascular access which has good blood flow, excellent patency, and allows easy and repetitive cannulation with two needles. The arteriovenous fistula (AVF) provides the best access for longevity and lowest association with morbidity and mortality, followed by arteriovenous grafts (AVG s)[1]. Complications due to vascular access represent a large number of inpatient hospitalisations, and are an important cause of morbidity and mortality for the dialysis population.

6 In a 1993 review of the United States Renal Data Service database, 15-16% of hospitalisations were vascular access related [2]. Thrombosis, stenosis, and infection are the three most prevalent complications of arteriovenous fistulas and grafts increasing reliance on central vascular catheters for dialysis access [3]. Patients dialyzing with AVG s or central venous catheters (CVC s) have a significantly higher relative risk for death, and in diabetics, AVG s and CVC s were associated with a higher overall relative risk of death of and respectively, when compared to AVF[4], Mortality is reduced by approximately 50% in patients who switch from a catheter to a permanent access ( fistula or graft ) as compared with those who remain catheter dependent[5].

7 Patients with central venous catheters in use for haemodialysis have a higher mortality risk, followed by those with an arteriovenous graft and then arteriovenous fistula , thus preservation of the dialysis patients arteriovenous fistula or graft is critical to improved survival [4]. Infection remains one of the greatest risk factors to morbidity and mortality for the dialysis population. The ANZDATA report summary [6] has reported 11% of all deaths in the dialysis dependent population in 2010 were due to infection. The Canadian Morbidity Study showed a rate for AVF infection and a for AVG infection in the first year of follow up [2].

8 Infection remains second only to cardiovascular death as a cause of mortality accounting for 15-20% of patient death [2]. In addition, infections are the leading cause of all hospital admissions (102 admissions / 1,000 patient-years) in haemodialysis patients [7]. Staphylococcus aureus carriage in the nose and on the skin has been shown to be more common in patients receiving chronic haemodialysis than in the general population, and has also been found to be a major pathogen in this population, especially as the causative agent of access site infections [8]. Although fistulas require far fewer interventions than do grafts, they still develop stenosis and thrombosis [5].

9 Cannulation techniques, through tissue displacement and repair, may induce the formation of aneurysms and scars that in turn may favour the development of stenotic lesions and impact on fistula and graft survival [9]. The two major causes of thrombosis are: (a) damage to vessel wall and endothelium due to continuous cannulation and (b) stenosis, a narrowing of the vessel wall predominantly caused by intimal hyperplasia [10] Thrombosis accounts for approximately 80% of graft failures. Thrombosed grafts usually have an underlying stenosis, and timely detection and correction of the stenosis will prevent graft thrombosis [5].

10 Needle infiltration of new fistulas is a relatively frequent complication, which occurs most commonly in older patients. A single major infiltration prolongs catheter dependence by a median of 3 months [5]. Good cannulation technique can reduce the incidence of needle infiltration. Repeated cannulation of AVF s and in particular AVG s places the patient at risk for infection via bacterial contamination. Bacteria can either be directly introduced into the circulation leading to either local infection of the access or bacteraemia [2]. Strict adherence to infection control policies is paramount to preventing access site infections. 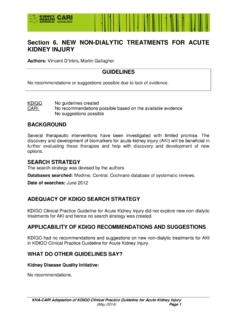 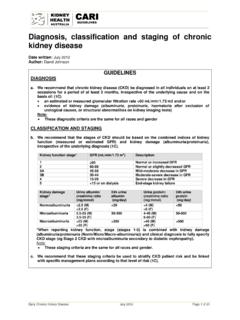 Diagnosis, classification and staging of chronic … 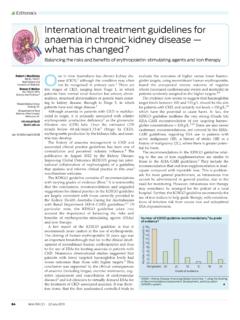 International treatment guidelines for anaemia in …

Editorials MJA 199 (2) · 22 July 2013 85 The KDIGO guideline also covers the use of red cell transfusion in patients with CKD,5 again emphasising the importance of balancing risks and benefits. 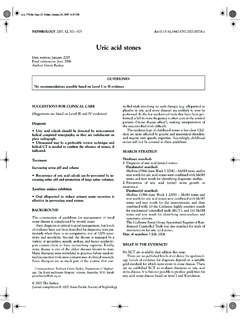 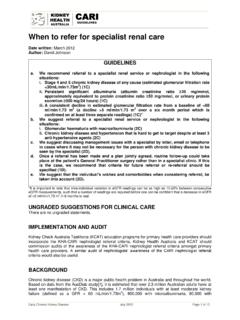 When to refer for specialist renal care - KHA-CARI …

Early Chronic Kidney Disease July 2012 Page 1 of 13 When to refer for specialist renal care Date written: March 2012 Author: David Johnson GUIDELINES a. We recommend referral to a specialist renal service or nephrologist in the following

Section 1. DEFINITION AND CLASSIFICATION OF …

Modification of lifestyle and nutrition interventions … 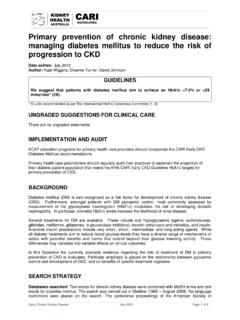 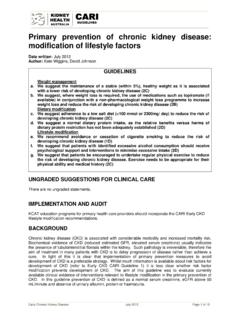 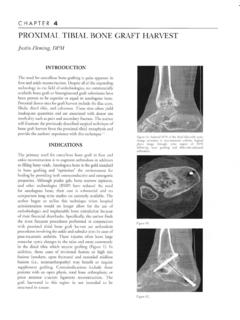 CHAPTER 4 PROXIMAL TIBIAL BONE GRAFT FIARVEST Justin Fleming, DPM INTRODUCTION The need for cancellous bone grafting is quite apparent in foot and ankle reconstruction.Despite all of the expanding technology in the field of orthobiologics, no commercially available bone graft or bioengineered graft substitutes have been proven … 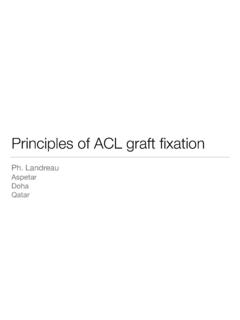 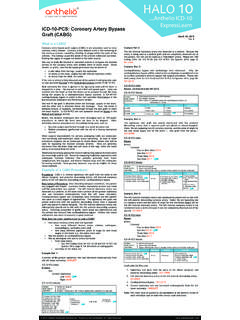 ICD-10-PCS: Coronary Artery Bypass Graft (CABG) Example Part 2: The left internal mammary artery was dissected as a pedicle. Because the artery is being used as a pedicle graft and not completely dissected out of 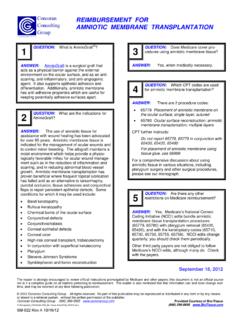 AmnioGraft is a surgical graft that acts as a physical barrier against the external environment on the ocular surface, and as an anti-scarring, anti … 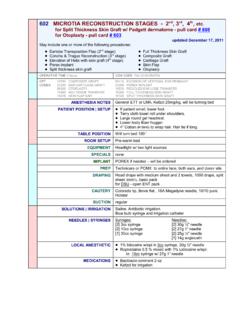 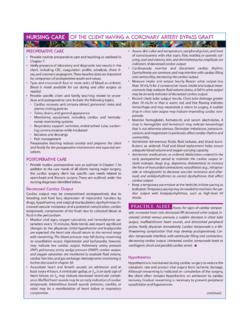 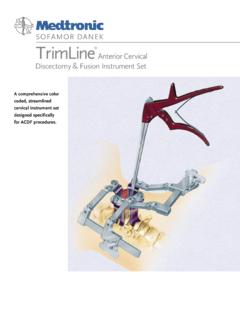 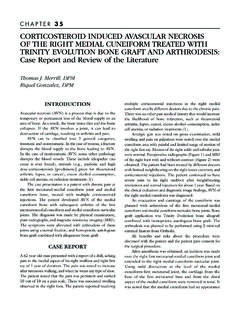 C H A P T E R 35 INTRODUCTION Avascular necrosis (AVN) is a process that is due to the temporary or permanent loss of the blood supply to an area of bone.