OBITUARY. - Cork Past and Present

3 Admitted a solicitor, r 837, and practised up to r879. Solicitor for the Cork and Bandon Railway; Co rk and Macroom, and Cork and Kinsale Rail - ways; and for Cork Board of Guardians; appointed Clerk of the Crown and Peace for the West Riding of County Cork. Mr. Babington died August, r894, at L eeds, Yorkshire. The late Mr. Thomas Babington. (tontemporar\? :n3iograpbies- OBITUAny 30 7. Downes. - TH OMAs DOWNES, lat e of Nort on, Skibbereen ~. son 'of the la te Thom as Down es, of Mitchelstown ; born at Mitchelst own, June 18th, 1843; ed ucat ed at Cas tl ekn ock, Dublin.)

8 St . Fin an 's Glen , co . K erry. The late Charles Downes. r 308 <.torR anb co. <.torR .;. - . Dring. - SIMON DRING, , late of Tower Hill, Glanmire, and Glengarra, Killeagh, co. Cork; son of the late Robert Harding Dring, of Glengarra, Killeagh ; born Ylarch20th, r854 ;. is the descendant of one of the oldest families in co. Cork, dating back to the 9th century, his two sons b eing now the sale r epresentatives; educated at Trinity College, Dublin . Justice of the Peace for co. Cork; takes a keen interest in agriculture, and is a member of the co. 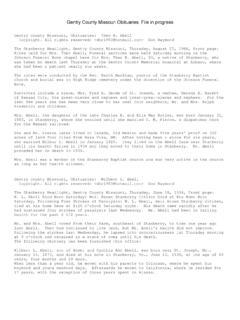 While in California, Mr. Abell was employed in a saw mill camp in the wonderful redwood district. He followed this occupation until his return to Missouri in 1911.

Come join us for our… Club Dinner & General Meeting 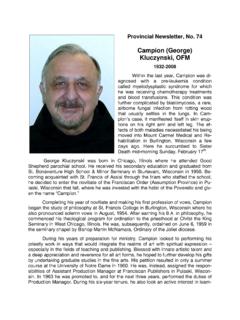 Provincial Newsletter, No. 74 Campion (George) Kluczynski, OFM 1932-2008 Within the last year, Campion was di-agnosed with a pre-leukemia condition 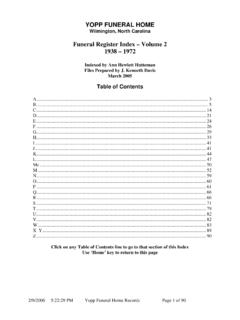