2 Its use field goals made, free throws made, free throws attempted, personal fouls and as the only OFFICIAL scoring form, especially for all collegiate games, will total points. Both two- and three-point field goal totals should be included in the standardize BASKETBALL scoring and assure a proper and complete record of all total number of field goals made. games played, whether home or away. TOTALS LINE BENEATH SCORING AREA: Vertically total the field goals, three- The form includes all statistical columns along with the running score for which the point field goals and free throws for each half and enter on the totals line to check OFFICIAL scorer is responsible, as stated in the OFFICIAL ncaa Men's and Women's figures above with running score below.

3 BASKETBALL Rules and Interpretations. Actual player statistics that are commonly recorded such as field-goal attempts, rebounds and assists should be handled TEAM FOULS: Mark off each personal, unsporting technical or contact technical by a separate individual or statistical crew and not by the OFFICIAL scorer. foul charged to each team to determine bonus free-throw situations. Indicate the time of the foul or the players' jersey number who committed the foul in the space GENERAL INFORMATION: The top boxes across both scoring pages give provided. After the sixth foul has been recorded in a half (in a college BASKETBALL general information about the game being scored, including the teams involved game), each succeeding common foul (except a player-control or team-control and their coaches, the date, site and attendance, and the names of the officials foul) in that half will receive a bonus free throw.

4 Starting with the 10th team foul, involved in the contest. each common foul (except a player-control or team-control foul) in that half shall SCORING BY PERIODS: In the boxes provided, record the number of points actually result in two free throws (except for a three-shot foul). scored in each period of play. Only the final score should be cumulative, as the running TIMEOUTS: Mark each timeout charged to a team, and use the space below to score gives cumulative totals at the end of each period. A suggested method for scoring indicate the time at which it was taken (from the game clock) to help substantiate is to use a different ink color for each half and each overtime period. the number recorded. Some scorers also record in this space the number of the NUMBER AND PLAYER COLUMNS: Before the start of the game, the last name player who called the timeout.

5 Use the extra blank spaces to record timeouts and number of each squad member dressed for and eligible to play in the game in overtime games. Use the space provided on the lower-right side of the right should be recorded in the appropriate spaces. It is recommended in the OFFICIAL ncaa hand pages to record each timeout called specifically for or used by broadcast rules book that the squad members' names be entered in the SCOREBOOK in numerical media. Keep in mind that the number of team timeouts allowed depends on order. Space is provided at the top of the roster for an OFFICIAL from each team whether the game involves commercial electronic media. For more description, (preferably a coach) to initial the approval of the roster before the game begins.

6 See the timeout chart at the end of the rules section. FOULS: Each time a personal foul or direct technical foul is charged to a player, TECHNICALS & NOTES: This is the OFFICIAL scorer's free space and may be make a slash through the next available number (1, 2, etc.) to keep a correct total used for the recording of any pertinent data relative to the game being played for of the number of fouls charged to each player. Some scorers differentiate second- which space is not otherwise provided. An example of this type of information is a half fouls from first-half fouls by making the slash in the opposite direction during foul charged to a coach, other bench personnel, a follower, a player ejected for the second half and extra periods.

7 You may want to indicate a technical foul with a fighting, or an injured player. T or an intentional foul with an I. Indicate technical fouls in the space labeled Technicals & Notes, noting whether they are direct or indirect. RUNNING SCORE: The running score is among the most important tasks of the OFFICIAL scorer, because it represents the actual game score as the game FIELD GOALS: After each successful field goal by a player, mark a 2 or 3 in progresses and is the OFFICIAL score of the game at any point in time. Mark out the the field-goal column beside the name. Mark a 3 only if the shot is successful correct numbered squares as each point is scored. The optional spaces below from beyond the three-point field goal line and is indicated as such by an OFFICIAL .

8 May be used to indicate the number of the player scoring and the approximate Second-half and overtime goals should be recorded in the spaces provided and time remaining in the half when the points were scored. not continued in the first-half column. FREE THROWS: Record each free throw attempted and made in the proper half ALTERNATE POSSESSION: This space is used to keep track of team or overtime space. Free-throw attempts should be recorded with a before the possession when a held ball situation occurs. Actual center jumps are used only free throw is attempted. If the free throw is successful, put an X inside the . to start the contest and to start each overtime period. The alternate-possession Indicate two-shot fouls by recording and three-shot fouls by.

9 Indicate rule is used at every other occasion, making it important for scorers to record bonus-situation fouls by before the shot is attempted, and by if the first each change of possession in the space provided. Note: Space is provided to shot is successful, and by if both shots are successful. If the second shot is indicate the time at which a change of possession occurs. unsuccessful, leave the marking as . The ncaa publishes a complete manual for the BASKETBALL statistician, the OFFICIAL SUMMARY COLUMNS: At the end of the game, the figures recorded BASKETBALL Statisticians' Manual, which is available for $5 from ncaa Publishing, for each player should be totaled and placed in the proper column in the OFFICIAL phone: 888/388-9748; OFFICIAL Scoring and Timeout Rules (Reprinted from the ncaa Men's and Women's BASKETBALL Rules and Interpretations).

10 Section 12. Duties of Scorers direct technical fouls, (men) intentional technical fouls and flagrant technical fouls. The scorers shall: Art. 12. Designate that the SCOREBOOK of the home team shall be the OFFICIAL SCOREBOOK , unless the referee rules otherwise. The OFFICIAL SCOREBOOK shall remain at Art. 1. Record the names and uniform numbers of squad members who may the scorers' table throughout the game, including all intermissions. participate and those of the starting five players. 31. At halftime, the OFFICIAL scorer, who is a member of the home-team faculty, removes the Art. 2. Record the field goals made and the free throws made and missed, and keep SCOREBOOK from the scorers' table: (a) of his or her own volition; or (b) at the request of the home- a running summary of the points scored. 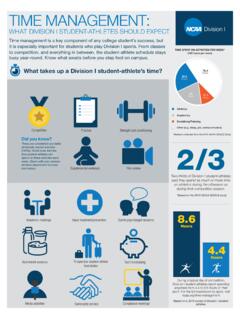 TIME MANAGEMENT: WHAT DIVISION I STUDENT-ATHLETES SHOULD EXPECT Time management is a key component of any college student’s success, but it is especially important for students who play Division I sports. 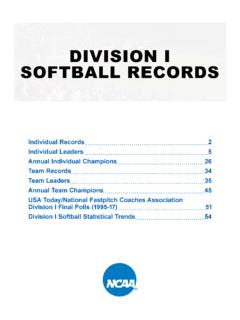 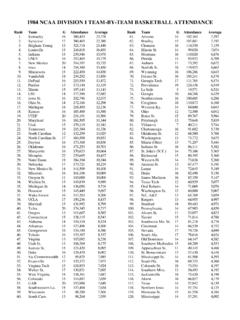 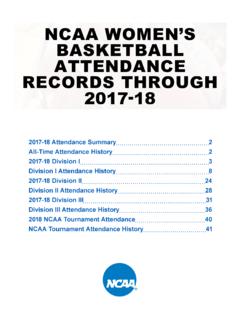 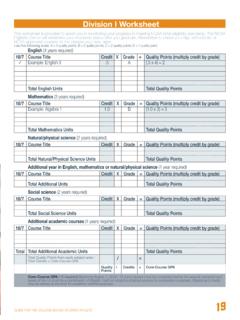 This worksheet is provided to assist you in monitoring your progress in meeting NCAA initial-eligibility standards. The NCAA Eligibility Center will determine your academic status after you graduate. for a full list of your high school’s approved core ...

If you want to play sports at an NCAA Division I or II school, start by registering for a Certification Account with the NCAA Eligibility Center at eligibilitycenter.org.

Below is a list of items we recommend you have before beginning your registration with the NCAA Eligibility Center: Valid Student Email You need a valid email address that you check 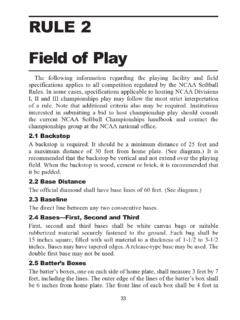 Rule 2 / FIelD OF PlAY 35 It is recommended that each dugout be located on the sideline boundary at a point of equal distance from home plate and first base, and home plate 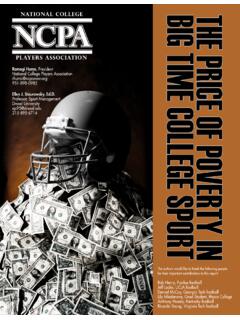 The Price of Poverty in Big Time College Sport 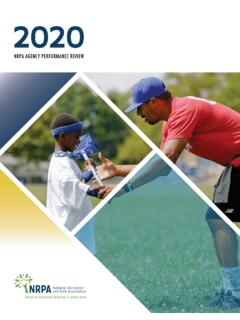 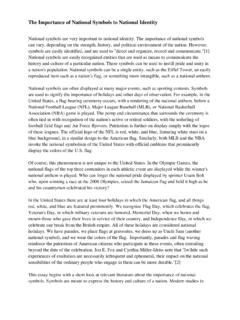 The Importance of National Symbols to National Identity

The Importance of National Symbols to National Identity These everyday, "banal" examples of national symbolism and identity can be seen in the flags 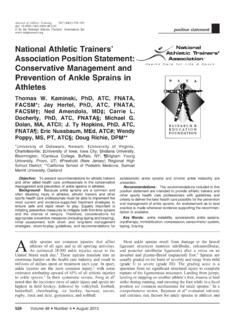 concluded that the only consistent risk factor identiﬁed across original research studies was a previous history of ankle sprain. Despite the frequency of ankle sprains in athletes, the 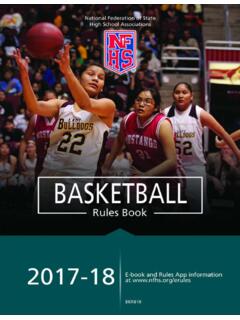