2 May apply simultaneously oiml publications and metrological controls applied by the national metro- and those of other institutions. logical services, or related organizations, of its Member International Recommendations and International Docu- States. ments are published in French (F) and English (E) and are subject to periodic revision. The two main categories of oiml publications are: This publication - oiml D 28, Edition 2004 (E) - was International Recommendations ( oiml R), which are developed by TC 9/SC 3 Weights. It replaces oiml R 33, model regulations that establish the metrological charac- Edition 1979 (E) which has been withdrawn. It was teristics required of certain measuring instruments and approved for final publication by the International Com- which specify methods and equipment for checking their mittee of Legal Metrology in 2004 .

3 Conformity; the oiml Member States shall implement these Recommendations to the greatest possible extent; oiml Publications may be downloaded from the oiml web site in the form of PDF files. Additional information on International Documents ( oiml D), which are inform- oiml Publications may be obtained from the Organization's ative in nature and intended to improve the work of the headquarters: metrological services. oiml Draft Recommendations and Documents are Bureau International de M trologie L gale developed by technical committees or subcommittees which 11, rue Turgot - 75009 Paris - France are formed by the Member States. Certain international and Telephone: 33 (0)1 48 78 12 82. regional institutions also participate on a consultation basis.

4 Fax: 33 (0)1 42 82 17 27. Cooperative agreements are established between oiml and E-mail: certain institutions, such as ISO and IEC, with the objective Internet: 3. oiml D 28: 2004 (E). Conventional value of the result of weighing in air 0 Introduction The mass of an object is obtained by weighing in air. Because the weighing instrument indicates a value that is proportional to the gravitational force on the object reduced by the buoyancy of air, the instrument's indication in general has to be corrected for the buoyancy effect. The value of this correction depends on the density of the object and the density of the air. Conventions have been developed which simplify the mass determination of weights in metrology. A conventional mass, mc, is defined such that, under specified conditions, this air buoyancy correction will be unnecessary.

5 The conditions have been chosen such that mass and conventional mass of a weight do not differ by more than specified maximum values ( , see Table 1 in oiml R 111-1 Weights of classes E1, E2, F1, F2, M1, M1 2, M2, M2 3. and M3. Part 1: Metrological and technical requirements ). 1 Scope This Document presents the definition of the quantity conventional mass (conventional value of the result of weighing in air) as it is used for the characterization of weights and its relation to the physical quantities mass and density and the evaluation of its uncertainty. The concept of conventional mass aims to simplify the determination of the mass of weights under conditions in ambient air. It implies that conventional mass does not differ from the physical quantity mass by more than certain acceptable values, when determined under specified limits of air density and the material densities of the weights.

6 2 Terminology Mass Physical quantity, which can be ascribed to any material object and which gives a measure of its quantity of matter. The unit of mass is the kilogram. Density Mass divided by the volume of a body, given by the formula: m = . V. Weight Material measure of mass, regulated in regard to its physical and metrological characteristics: shape, dimensions, material, surface quality, nominal value, density, magnetic properties and maximum permissible error. Note 1: The term weight is also used as the physical quantity of the gravitational force of a body [1]. From the context it is usually clear in which sense the term is used. If the sense is not clear, one may use the words weight force or weight piece , depending on its meaning.

10 6 Density of weights Equation (1) is derived from the following weighing equation: (2). This equation describes a weighing process, where a weight of mass m and density is in equilibrium with a reference weight of conventional mass mc and density c at an air density 0. This is an idealized condition, because real air density usually deviates from 0. If we assume that the two weights were compared at an air density a that is different from 0, the weights are no longer in equilibrium and the balance indication will differ from zero by an amount corresponding to mw. We have then: (3). Equation (3) shows that the weight with mass m, which has a conventional mass mc derived from the reference mass according to equation (2), is no longer in equilibrium with the reference mass, when the air density deviates from 0. 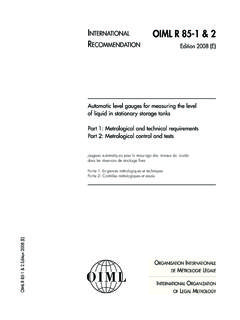 OIML R 51-2: 2006 (E) 3 Foreword The International Organization of Legal Metrology (OIML) is a worldwide, intergovernmental organization whose primary aim is to harmonize the regulations and metrological controls applied by the national 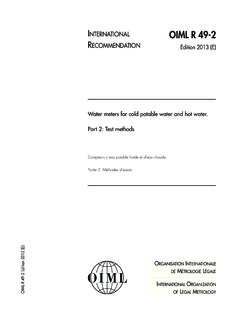 OIML R 49-2:2013 (E) Foreword The International Organization of Legal Metrology (OIML) is a worldwide, intergovernmental organization whose primary aim is to harmonize the regulations and metrological controls applied by the national 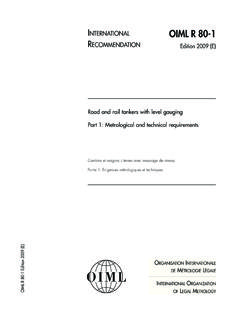 4 Foreword The International Organization of Legal Metrology (OIML) is a worldwide, intergovernmental organization whose primary aim is to harmonize the regulations and metrological controls applied by the national 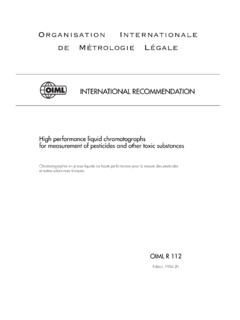 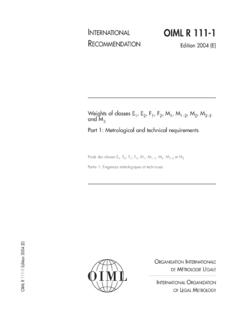 OIML R 111-1: 2004 (E) 3 T he International Organization of Legal Metrology (OIML) is a worldwide, intergovernmental organization whose primary aim is …