TMSJ 4/1 (Spring 1993) 67-94. OT COMMENTARIES FOR BIBLE expositors , 1987 -921. James E. Rosscup Professor of BIBLE Exposition Recent years have witnessed the publishing of an abundance of COMMENTARIES on OT books of the BIBLE . A survey of such volumes published from 1987 through 1992 can be quite beneficial to one's study of the BIBLE for either public presentation or personal use. An annotated bibliography noting the books' purposes and evaluating how well the authors have provided comments to help expositors is a good way to look quickly at a large number of sources. After a survey of the individual works, a classification and ranking of books on Genesis illustrates a good way to compare the volumes with each other by dividing them into categories according to their types of treatment and rating them according to the quality of their explanations.

1 TMSJ 4/1 (Spring 1993) 67-94. OT COMMENTARIES FOR BIBLE expositors , 1987 -921. James E. Rosscup Professor of BIBLE Exposition Recent years have witnessed the publishing of an abundance of COMMENTARIES on OT books of the BIBLE . A survey of such volumes published from 1987 through 1992 can be quite beneficial to one's study of the BIBLE for either public presentation or personal use. An annotated bibliography noting the books' purposes and evaluating how well the authors have provided comments to help expositors is a good way to look quickly at a large number of sources. After a survey of the individual works, a classification and ranking of books on Genesis illustrates a good way to compare the volumes with each other by dividing them into categories according to their types of treatment and rating them according to the quality of their explanations.

2 **. 1 Editor's note: The volumes and annotations in this article have been selected from a larger annotated bibliography compiled by Professor Rosscup. Recently revised, updated, and enlarged (1993 revision of a 1983 ed.), this larger work includes approximately 1,300 individual COMMENTARIES or sets of COMMENTARIES with annotations on all sixty-six books of the BIBLE , the volumes deemed to be the most helpful for expositors and teachers of the Word based on the compiler's thirty-five years of seminary involvement and teaching. The unabridged bibliography is available through Grace Book Shack at the same address as The Master's Seminary Journal. This article has selected works from the last five years, 1987 -92, and pertaining to the OT only. An article in the Fall 1993 issue of TMSJ will deal similarly with NT works. 67. In an era of mushrooming information, publishing of tools for biblical study has not lagged behind literature in other fields.

3 In a seemingly never-ending stream, books dealing with the BIBLE continue to appear. That has evoked what is perhaps the most frequently asked kind of question by those who thirst for a deeper understanding of the Word: "What is the best commentary on Genesis?" or "What is the best book for studying Old Testament backgrounds?" or "What is the best commentary set on the Old Testament?". Such a question deserves a knowledgeable answer because the accuracy and consequent effectiveness of someone's sermon or BIBLE - study lesson may hinge on the advice given. Yet it is not an easy question to answer. One reason it is not easy to answer is the rapidity with which new volumes are appearing. The following remarks cite recent works that, for some reason, deserve such special attention. This is not intended to be an exhaustive listing of recent works, but the number of study tools cited should furnish a beginning answer to readers' questions such as the ones cited above.

4 The descriptions are limited to some of the relatively recent volumes and sets, under the assumption that many will already know the merits of many of the older works. Anyone interested in a complete annotated bibliography should consult the information in note 1 above. COMMENTARIES ON THE WHOLE BIBLE . Several COMMENTARIES on the whole BIBLE have appeared and can be divided into two groups: those that follow a "synthesis". approach and those that are more analytical. Works That Synthesize The BIBLE Speaks Today. Downers Grove, IL: InterVarsity, 1986` . The volumes in this series furnish surveys to BIBLE books in a lucid manner that explains passages concisely, deals with some problems, and shows the practical import of principles. Writers often draw on considerable scholarly help, resulting in a competent evangelical product.

5 Joyce Baldwin does The Message of Genesis 12-50. (1986). Derek Kidner contributes Love to the Loveless (Hosea) and A. Time to Mourn and a Time to Dance (Ecclesiastes). Michael Wilcock is fairly helpful on Chronicles, John Stott very good on Galatians and Ephesians, R. C. Lucas vital on Colossians and Philemon. The series has other contributors and is helpful for lay readers and pastor- teachers desiring a readable and refreshing tracing of the progression of thought. 68. OT COMMENTARIES for BIBLE expositors 69. Raymond Brown, et al, eds. The New Jerome Biblical Commentary. Englewood Cliffs, NJ: Prentice Hall, 1990. 1,475 pp. This updates The Jerome Biblical Commentary that appeared twenty-two years ago by incorporating the results of recent scholarship. It represents some of the cream of Roman Catholic scholarship in commentary and special articles on topics such as the Pentateuch, wisdom literature, prophetic books, apocalyptic, Hebrew poetry, apocryphal sources, Dead Sea Scrolls, other Jewish literature, text and versions, modern OT criticism, biblical archaeology, and religious institutions of Israel.

6 About sixty percent of the material is new. Walter Elwell, ed. Evangelical Commentary on the BIBLE . Grand Rapids: Baker, 1989. 1,229 pp. The purpose of this one-volume work is to help those without technical training to understand Scripture, an aim held in common with several other COMMENTARIES not written with scholars in mind. Contributors represent a variety of viewpoints, unity of content not being the goal (p. viii). Some of the better portions are on Genesis and Ezekiel (Victor Hamilton), Leviticus and Ezra/Nehemiah (Louis Goldberg), Joshua and judges (Andrew Bowling), ruth (R. K. Harrison), 1 and 2 Samuel (Herbert Wolf), Proverbs (R. K. Harrison), James (Douglas Moo), and the Johannine Epistles (James B. DeYoung). James L. Mays, ed. Harper's BIBLE Commentary. San Francisco: Harper & Row, 1988. 1,326 pp. Here, eighty-two scholars from the Society of Biblical Literature provide introductory essays and COMMENTARIES .

7 The work's essays deal with such topics as reading and interpreting the BIBLE , OT context, context of Apocrypha and NT, how the BIBLE relates to literature of the ancient Near East and the Greco-Roman era, Jewish interpretation, and introductions to sections of the BIBLE such as Psalms and Wisdom, with a bibliography at the end of each. The work leans toward the JEDP. theory about some OT books, Canaanite religious ideas, the view that Genesis 1-2 has two creation accounts, and other liberal theories. John Phillips. BIBLE Explorer's Guide. Neptune, NJ: Loizeaux, 1987 . 274 pp. This general introductory work, evangelical in nature, has two sections, Hermeneutics and Helps. Under the first are twenty-two divisions dealing with Words, Figures of Speech, Culture, Context, Types, Parables, Prophecy, Devotional Rule, Application, Christ the Ultimate Key, and others.

8 The second has a quick survey of the BIBLE , summary of BIBLE history, symbols, helpful books, and the like. 70 The Master's Seminary Journal Phillips, a premillennialist, is well-known for his Exploring the New Testament, a series of clear practical expositions of key books like John and Romans. Lawrence O. Richards. The Teacher's Commentary. Wheaton: Victor, 1987 . 1,110 pp. This is an evangelical effort by a Dallas Seminary graduate to survey each book of the BIBLE and provide special material to help teachers of Sunday Schools, BIBLE study leaders, and pastors teach on different sections. The special features include illustrations and applications, definitions of biblical and doctrinal terms, background, maps and charts, and teaching suggestions. Coverage of sections is of a very general nature that picks out some key points and skips many others.

9 Richards devotes five and one-half pages to the treatment of Psalms 74-150. Proverbs 10-31 and Ecclesiastes receive about the same. The amount of material that is bypassed will perhaps agitate readers. The page format is in two-columns of very readable type. Works That Analyze Frank E. Gaebelein, gen. ed. The Expositor's BIBLE Commentary. 12. vols. Grand Rapids: Zondervan, 1979`92. This is the top general work of scholarly evangelicalism by seventy-two writers who are from several countries and hold to divine inspiration of Scripture and premillenialism (for the most part). The NIV is the basis for their comments. The Associate Editor is J. D. Douglas, and consulting editors are Walter C. Kaiser, Jr., Bruce K. Waltke, James Boice, and Merrill C. Tenney. The work reflects a sensitivity to recent literature, issues, and views on exposition.

DOES GOD DECEIVE? THE “DELUDING INFLUENCE” OF …

deceived, but the woman being quite deceived, fell into transgression.” Deception, at it s core, is a l ie in place of t he truth. The NT word s repe atedly 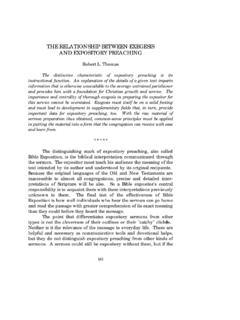 THE RELATIONSHIP BETWEEN EXEGESIS AND …

181 THE RELATIONSHIP BETWEEN EXEGESIS AND EXPOSITORY PREACHING Robert L. Thomas The distinctive characteristic of … 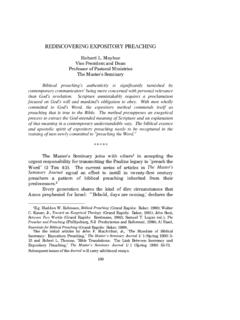 Rediscovering Expository Preaching 113 What is the necessary response? We assert that it is to redis-cover and reaffirm expository preaching for the coming generation of 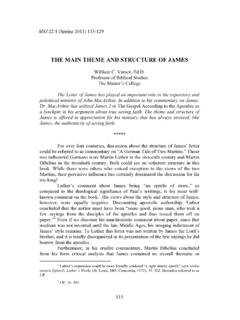 THE MAIN THEME AND STRUCTURE OF JAMES

as a sort of “table of contents” for the rest of the book.6 Others have argued more specifically that 1:19 ... The Main Theme and Structure of James SANCTIFICATION AND JUSTIFICATION: A UNITY OF DISTINCTIONS

Sanctification and Justification: A Unity of Distinctions 3 is made 4acceptable to God. In salvation, God declares a sinner to be righteous—a WHO IS WRONG? A REVIEW OF JOHN GERSTNER'S …

dispensationalism contains shortcomings that necessitate this special review article to point out some of these and to challenge dispensationalists to publicize a greater clarification of their position. Introduction to New Covenan t Theology 151 6Ibid, ii. 7Ibid., 109. 8As with all group s or m ovem ents , exc eption s alw ays occur.M any on the Internet affirm or identify themselves with NCT but have odd o … THE MONTANIST CRISIS: A KEY TO REFUTING THIRD-WAVE ... How to Use Biblical Commentaries - Fortress Press

How to Use Biblical Commentaries . The Bible: ... detailed commentaries to engage a text in more depth and detail. ... Judges and Ruth, New Cambridge Bible …

Biblical, Bible, Ruth, Commentaries, Judges, How to use biblical commentaries A Great Commission Ministry: Evangelism and …

c. Judges, Ruth 2. Commentaries that I plan ... A Great Commission Ministry: Evangelism and Discipleship ... he felt the desire to write commentaries on the Bible! 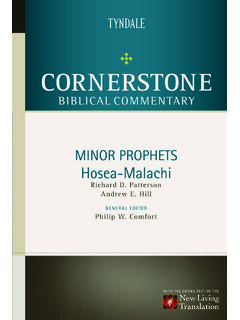 Bible—Commentaries. I. Hill, ... The Cornerstone Biblical Commentary is based on the second edition of the New ... Judg Judges Ruth Ruth 1 Sam 1 Samuel RECOMMENDED LIST OF EVANGELICAL COMMENTARIES ... Although there are numerous commentaries on each book of the Bible, ... A Commentary on Judges and Ruth… The Book of Judges - A Burning Fire

The Book Of Judges ... and to all the many students in my Bible classes ... commentaries get more out of the book than what God COMMENTARY ON BOOK OF RUTH - …

COMMENTARY ON BOOK OF RUTH ... Ruth 4:14 “Blessed is the ... To contrast the reproach brought upon Bethlehem in Judges 17--21 with the account Judges Judges is, in the Hebrew tradition, counted as the second of the four books of the Former Prophets (Joshua, Judges, Samuel, and Kings). The King James Version of the Holy Bible

Bible, James, King, Version, The king james version of the