2 Exceptions: i. Cities of the First Class -- , Philadelphia ii. Philadelphia School District iii. PennDOT Contracts iv. Distressed municipalities or school districts v. Non-payment caused by failure of the Commonwealth to enact a budget or where Federal or State funding, or where failure to pay is caused by the State or Federal government fails to pay the local government unit d. Conflicts with other laws: i. Doesn't abrogate the Prevailing Wage Act in any way ii. Act cannot be a bar to Federal Aid, or conflict with laws or regulations governing contract awarded pursuant to Federal law or regulation iii. A provision in the contract making it subject to the laws of another state or requiring that any litigation, arbitration or other dispute resolution process on the contract occurs in another state shall be unenforceable 2.

4 Withholding for Deficiency Items: a. Payments can be withheld when notice is given to Contractor or Subcontractor of deficiency items; only payments relating to the deficiency item can be withheld b. Owner must notify the Contractor of deficiency item within 15 days of the payment application, unless otherwise specified in the contract c. Contractor must notify the subcontractor within 15 days of its receipt of notice from the government agency 4. Retainage: a. Contracts providing for retainage must contain a provision requiring the design professional to inspect within 30 days of the request for final inspection by contractor and application for final payment b. Retainage to contractor cannot exceed 10% up to 50% completion, when one half must be returned to contractor, the 5% thereafter - Exception when the local government agency is the Department of General Services (6% to 50% complete; 3% thereafter).

5 Contractors must pay subs their earned share within 20 days of receipt c. Upon substantial completion, payment due within 45 days, less times the cost to complete punch list items d. Interest after substantial completion i. 6% on all contracts without retainage provisions ii. 10% on contracts with retainage provisions iii. Except where bonds have been issued to finance the project, the rate of interest on the bond or 10%, whichever is less, but in no event less than the legal rate of interest (6%). 2. 5. Penalties and Attorneys Fees: a. Award of attorneys fees and interest (1% per month) may be awarded where payment was withheld in bad faith, defined in the Act as arbitrary or vexatious . b. Cummins v. Atlas Railroad Construction Co.

6 , 814 742 ( 2002): i. although a large number of claims of deficiency items and backcharges, and where contractor prevailed on all claims, because contractor admitted that each individual claim was brought in good faith, argument that the collective, systematic withholding of payment was arbitrary justifying an award of penalty and attorneys fees failed ii. left open the issue of whether this issue is for the jury to decide 6. Bar Against Contractor or its Surety Once Payment Made at Subcontractor Level - Trumbull v. Boss Construction, Inc., 768 368 ( 2001) - material supplier barred from claim on bond after subcontractor paid 7. Other Claims Against Sureties - Sidley, Inc. v. United States Fidelity & Guaranty Company, 319 554 ( Pa. 2004).

7 - Unless provided for in the payment bond, sureties are protected against interest claims under the Public Works Contractors Bond Law of 1967, 8. 191, et seq. - The Prompt Pay Act does not permit claims for penalty and interest against the contractor's surety 3. Text of the Act Pennsylvania Prompt Pay Act, 62 3901, et seq. 62 3901. Application and (relating to definitions)1, including heating purpose of chapter or plumbing contracts but excluding Department of Transportation contracts (a) as otherwise under section 301(c)(1) (relating to specifically provided in this chapter, this procurement responsibility). chapter applies to contracts entered into by a government agency through competitive "Contractor." A person who enters into a sealed bidding or competitive sealed contract with a government agency.

8 Proposals. "Deficiency item." Work performed but (b) Purpose of purpose of which the design professional, the contractor this chapter is to establish a uniform and or the inspector will not certify as being mandatory system governing public completed according to the contract. contracts to the extent of the requirements set forth in this chapter and shall be "Design professional." Persons performing construed to effectuate such purpose. The professional services as defined in section provisions of this chapter shall in no way 901 (relating to definitions). affect the provisions of the act of August 15, 1961 ( 987, No. 442), known as the "Government agency." Includes any State- Pennsylvania Prevailing Wage Act, nor the aided institutions.

9 Regulations promulgated under that act, nor shall any requirements of this chapter affect "Inspector." The person authorized or any provisions of a contract to be awarded engaged by the government agency to pursuant to any Federal law or regulations inspect the work performed and materials containing specific provisions which are furnished pursuant to a contract to determine different from the public contract whether the work completed is in requirements of this chapter. compliance with the contract. "Local government unit." Any county, city, borough, incorporated town, township, 62 3902. Definitions school district, vocational school district, county institution, local authority or any The following words and phrases when used joint or cooperative body of local in this chapter shall have the meanings given government units or any instrumentality, to them in this section unless the context authority or corporation thereof which has clearly indicates otherwise: 1.

10 "Contract." A contract exceeding $50,000 References to these sections are to for construction as defined in section 103 the Commonwealth Procurement Code, 62. 101. et seq. 4. authority to enter into a contract. bids shall be rejected. "State-aided institution." Any institution (c) of the date for which receives State funds directly or the award may be made by the mutual indirectly for construction as defined in written consent of the government agency section 103 (relating to definitions). and the lowest responsible and responsive bidder. "Subcontractor." A person who has contracted to furnish labor or materials to or (d) List of government has performed labor for a contractor or agencies shall be required to provide a list of another subcontractor in connection with a the bidders and their bid amount on each contract. 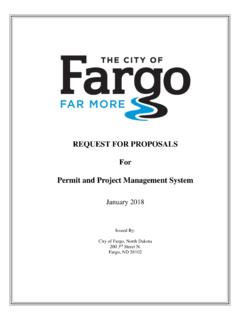 REQUEST FOR PROPOSALS For Permit and Project … 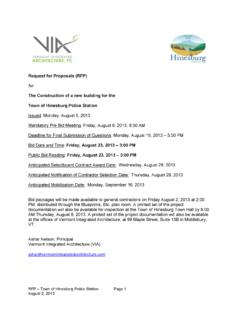 RFP – Town of Hinesburg Police Station Page 1 August 2, 2013 Request for Proposals (RFP) for The Construction of a new building for the 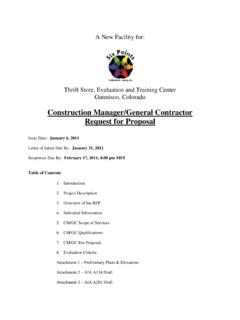 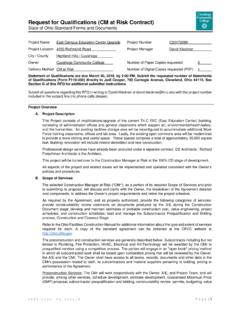 Request for Qualifications (CM at Risk Contract) State of Ohio Standard Forms and Documents 2 0 8 9 _ L e g a l A d _ 0 3 0 2 1 8 P a g e | 2 engineering, and some preconstruction planning throughout the preconstruction stages. 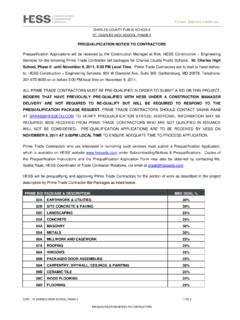 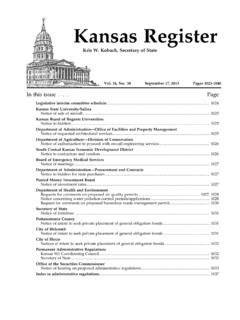 Chapter 32 State Board of Examiners of Master …