PHILOSOPHY OF MIND AND HUMAN NATURE

Chapter 26. PHILOSOPHY OF MIND. AND HUMAN NATURE . robert pasnau Biological or Theological A theory of HUMAN NATURE must consider from the start whether it sees HUMAN beings in fundamentally biological terms, as animals like other animals, or else in fundamentally supernatural terms, as creatures of God who are like God in some special way, and so importantly unlike other animals. Many of the perennial philosophical disputes have proved so intractable in part because their adherents divide along these lines. The friends of materialism, seeing HUMAN beings as just a particularly complex example of the sort of complex organic structure found every- where on Earth, suppose that we are ultimately constituted out of just the same material from which squirrels and rabbits are made.

philosophy of mind and human nature 351 Galileo in the seventeenth century, then going out of fashion, and now coming back into fashion with our modern talk of dark matter.

1 Chapter 26. PHILOSOPHY OF MIND. AND HUMAN NATURE . robert pasnau Biological or Theological A theory of HUMAN NATURE must consider from the start whether it sees HUMAN beings in fundamentally biological terms, as animals like other animals, or else in fundamentally supernatural terms, as creatures of God who are like God in some special way, and so importantly unlike other animals. Many of the perennial philosophical disputes have proved so intractable in part because their adherents divide along these lines. The friends of materialism, seeing HUMAN beings as just a particularly complex example of the sort of complex organic structure found every- where on Earth, suppose that we are ultimately constituted out of just the same material from which squirrels and rabbits are made.

2 The friends of dualism, instead, think that such a story can hardly do justice to what is special about HUMAN NATURE . Likewise, the friends of a libertarian, robustly nondeterministic conception of free will see something special in HUMAN spontaneity and moral responsibility. To their opponents, HUMAN beings operate on the same principles, albeit more complex, as do squid and plankton. These and other such disputes need not divide along religious lines. One may oppose naturalism without embracing a supernatural theistic perspective; one might, for instance, think it simply a matter of fact that HUMAN beings are funda- mentally unlike other biological organisms, but yet not suppose we are made that way by any higher power.

3 Conversely, the theist may think it part of the divine plan to have made HUMAN beings as nothing more than the most complex of biological organisms, constituted out of the same stuff and constrained by the same laws. So although the choice I have described between two perspectives biological and 348 7/8/2011 1:55:00 AM. PHILOSOPHY of mind and HUMAN NATURE 349. naturalistic versus theological and supernatural captures an important fault line that runs through the debate over HUMAN NATURE , it by no means determines all of one's subsequent philosophical choices. The PHILOSOPHY of Thomas Aquinas exemplifies the sorts of tensions that arise from these two perspectives.

4 For while the overall orientation of Aquinas's work is, of course, profoundly theistic, he nevertheless harbors a certain sympathy for a nat- uralistic, biological understanding of HUMAN NATURE . In some cases, as in his account of the HUMAN intellect, the supernaturalist slant clearly wins out. In other cases, as in his conception of HUMAN beings as a soul body union, it is equally clear that biological considerations are paramount. In still other cases, as for instance his views on free will, it is very difficult to say which line of thought holds sway, and the preference of interpreters for one reading or another seems largely governed by their own predilections.

5 The traditional way of making this point about Aquinas is to describe him as mediating between the theological teachings of the Church and the philosophical writings of Aristotle. Historically, this is an apt place to begin thinking about Aquinas's PHILOSOPHY , because there is no doubt that the central philosophical challenge Aquinas faced over the course of his career was to find a place for the newly recovered work of Aristotle within the overriding framework of Christian To find a place for Aristotle, however, means finding a place for a conception of HUMAN NATURE that is decidedly biological in its overall orientation.

6 This is clear from the fundamental Aristotelian text on HUMAN NATURE , the De anima, which as it happens was the subject of the first and most careful of Aquinas's many Aristotelian commentaries. For us, the notion of a soul (anima) has become firmly associated with a supernatural perspective on HUMAN NATURE . But for Aristotle the term soul . has not the slightest of nonnaturalistic implications. On the contrary, a soul is something that all living things possess, from HUMAN beings down to the simplest of life forms, and indeed the De anima is not so much a study of HUMAN NATURE as it is the foundational treatise in Aristotle's long sequence of biological works.

7 The project of reconciling Aristotle and Christianity, however, important as it is to understanding Aquinas's historical situation, does not fit the natural . supernatural distinction as neatly as one might expect. For even if the Aristotelian notion of soul is fundamentally biological, the De anima nevertheless seems to treat the capacity for thought the intellect as quite a special feature of HUMAN NATURE and, indeed, as immortal and eternal. 2 As we will see, these few brief, notoriously obscure remarks supply a bridgehead from Aristotle's naturalistic biology to Christian soteriology. There is movement in the other direction as well.

8 For even while there are tendencies in Christian thought toward treating the body in Platonic fashion, as a temporary prison of the soul, there is also the doctrine of the resurrection, according to which the separation of body and soul at death is a temporary state of affairs, to be remedied by the body's ultimate restoration, for all of eternity, at the time of the Final Judgment. As we will see, Aquinas understands the resurrection as pointing toward the fundamentally biological character of HUMAN NATURE , in the sense that HUMAN beings are, essentially, not just souls but 349 7/8/2011 1:55:00 AM. 350 epistemology and PHILOSOPHY of mind incarnate souls.

9 Although it is certainly the case that Aquinas regards the most important HUMAN attributes our intellectual and volitional powers as arising from the side of the soul rather than body, he is nevertheless adamant that a full understanding of HUMAN NATURE requires understanding our bodily NATURE as well. God did create purely spiritual beings, the angels, who are nothing more than dis- embodied minds, but that is not what we are. We are, essentially, mind body com- posites. So to understand HUMAN NATURE , one must study not just our mental capacities, intellect and will, but also the HUMAN body. Hence, the task is partly biological, but not wholly so.

10 The HUMAN Soul The most concise and authoritative statement of Aquinas's theory of HUMAN NATURE comes in questions 75 89 of the first part of the Summa theologiae, known as the Treatise on HUMAN That discussion begins with a very quick argument for the twin theses that HUMAN beings have a soul, and that this soul is not a body. These look like giant, contentious claims to come so quickly at the start, but Aquinas is quick here for a reason: one of the claims is simply a matter of terminological stip- ulation, and the other is such a large question that it can scarcely be adjudicated within the context of a discussion of HUMAN NATURE . WHAT IS SO GOOD ABOUT MORAL FREEDOM?

Good, About, Moral, Freedom, So good about moral freedom 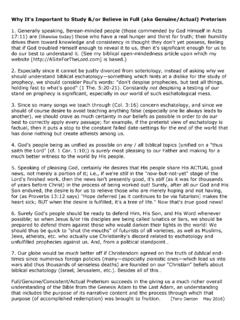 likewise today - A Site For The Lord

Why It's Important to Study &/or Believe in Full (aka Genuine/Actual) Preterism 1. Generally speaking, Berean-minded people (those commended by God Himself in Acts

6 sion to preserve the Linguistic acumen and terminology of the Church Of God In Christ may be attributed entirely to these two colorful personalities, nationally known for their 8 Chapter I THEOLOGY The word “theology” comes from the Greek word theos, meaning God. Thus, theology is the doctrine of God. To begin the study of the many Bible doctrines we must begin with 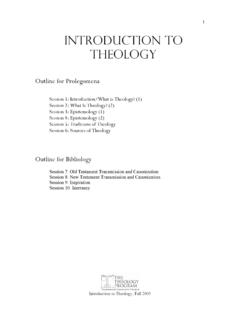 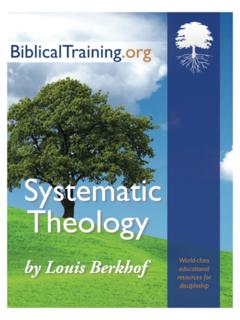 A. An External and an Internal Covenant. B. The Essence and the Administration of the Covenant. C. A Conditional and an Absolute Covenant. D. The Covenant as a Purely Legal Relationship and as a Communion of Life.