Pilotage on the Welland Canal CAPT. MIKE BURGESS. Vice-President, Great Lakes Region Canadian Marine Pilots ' Association XXII IMPA BIENNIAL CONGRESS. Panama April 2014. Pilotage on the Welland Canal - Remarks by Mike Burgess, Panama, April 2014. (SLIDE 1: TITLE). Introduction Being here today certainly brings back to my mind many good memories. It is indeed not far from here, as I was about to transit through the Panama Canal on what turned out to be my very last command as captain, that I received a call in February 1998 letting me know that the Great Lakes Pilotage Authority would become my next employer. I started my apprenticeship as a Great Lakes Pilot, in Canada, shortly thereafter and I was eventually licensed for District 2 of the Great Lakes Pilotage Region, which happens to include another Canal of importance for Marine traffic the Welland Canal .

Pilotage on the Welland Canal - Remarks by Mike Burgess, Panama, April 2014 - 2 - The southern end of the Canal, at Port Colborne on Lake Erie, is

1 Pilotage on the Welland Canal CAPT. MIKE BURGESS. Vice-President, Great Lakes Region Canadian Marine Pilots ' Association XXII IMPA BIENNIAL CONGRESS. Panama April 2014. Pilotage on the Welland Canal - Remarks by Mike Burgess, Panama, April 2014. (SLIDE 1: TITLE). Introduction Being here today certainly brings back to my mind many good memories. It is indeed not far from here, as I was about to transit through the Panama Canal on what turned out to be my very last command as captain, that I received a call in February 1998 letting me know that the Great Lakes Pilotage Authority would become my next employer. I started my apprenticeship as a Great Lakes Pilot, in Canada, shortly thereafter and I was eventually licensed for District 2 of the Great Lakes Pilotage Region, which happens to include another Canal of importance for Marine traffic the Welland Canal .

2 I have now been discharging my duties as a Welland Canal pilot for over 15 years and, during that time, I have completed over 1,000 assignments on the Canal . Piloting on the Canal is something of a family tradition for me, as my father also was a Canal pilot. As a kid, I used to go on ships with him and, while he perhaps wanted something better for me, in the end, I guess he only had himself to blame if I became a pilot! As I grew up watching him, I developed a deep respect and appreciation for our profession; so much so that it was always clear in my mind that I wanted to become a Great Lakes and a Welland Canal Pilot! The Welland Canal (SLIDE 2: THE Welland Canal ). The Welland Canal is located in Ontario. It is 43 kilometers long and is a crucial component of the St. Lawrence Seaway, connecting Lake Ontario and Lake Erie through the Niagara Peninsula.

3 It essentially enables ships to ascend and descend the Niagara Escarpment, and bypass the Niagara Falls. (SLIDE 3: THE ALTERNATIVE!). Construction on the Canal began in 1824 and it became operational a few years afterwards. It has been enlarged three times since then and, today, it is comprised of eight locks, including a set of three twin locks just like here in Panama. (SLIDE 4: TWIN LOCKS). -1- Pilotage on the Welland Canal - Remarks by Mike Burgess, Panama, April 2014. The southern end of the Canal , at Port Colborne on Lake Erie, is approximately 100 meters higher than its northern end, at Port Weller on Lake Ontario. (SLIDE 5: PROFILE). The Canal is deep. The maximum permissible length of a ship is meters while the maximum beam is 24 meters. For their part, the locks are by This means the operational clearance that Pilots have when going through the locks is sometimes approximately 15 centimeters on each side and all of 4m in front and behind.

4 In other words, we need to make ships fit right in, just like a glove on someone's hand. I'll get back to this in a few minutes. (SLIDE 6: A TIGHT FIT!). Approximately 40 million tonnes of cargo are carried through the Canal each year by some 3,000 vessels, of various types. These vessels are comprised of ocean-going vessels, from about 50 countries, along with Canadian and vessels, known as lakers , and built specifically for transporting cargo between ports within the Great Lakes-St. Lawrence system. (SLIDE 7: THE GREAT LAKES- ST. LAWRENCE SEAWAY SYSTEM). This system is actually the longest deep draft navigation system in the world, extending some 3,700 kilometers into the North American heartland. It plays an absolutely vital role in the continent's economy and the main cargoes that transit through it include iron ore for steel production, coal for power generation, limestone and cement for construction, and grain for both domestic consumption and export.

5 Since the Welland Canal is in Canada, you will not be surprised to learn that winter is an important factor in our operations! We do operate in ice conditions both on the Great Lakes, in general, and on the Canal itself. (SLIDE 8: ICE!). (SLIDE 9: MORE ICE!). But the Canal just like the rest of the Great Lakes-St. Lawrence system upstream of Montreal is shut down during winter from January to March when ice and weather conditions become a hazard to safe navigation. This also allows the St. Lawrence Seaway Corporation to do maintenance work, as may be needed. -2- Pilotage on the Welland Canal - Remarks by Mike Burgess, Panama, April 2014. (SLIDE 10: BUT SOMETIMES IT IS NICE!). Pilotage service on the Welland Canal is provided by a federal government crown corporation, the Great Lakes Pilotage Authority. To deliver the service, the Authority enters into a service agreement with the Corporation that I.

6 Am a member of the Corporation of Professional Great Lakes Pilots . My Corporation was established about 50 years ago, shortly after the St. Lawrence Seaway opened. The profile of our 23 Pilots is similar to my own. In each and every case, Pilots have achieved the rank of master prior to beginning their apprenticeship as Pilots and, typically, they have also been captains on lakers in the region for many years. The licensing process is rigorous: the apprenticeship lasts for many months, during which time the apprentice completes dozens of transits with a senior pilot. The examination process is administered by the Authority and, to be successful, candidates must demonstrate an excellent knowledge of local conditions during both written and oral exams held before a Board of examiners that is comprised mainly of licensed Pilots , in addition to an evaluation trip on board a vessel.

7 Once licensed, our members are qualified to complete assignments in three specific Pilotage areas: the Welland Canal , which represents about 70% of our assignments, the so-called west tour , for assignments that go from Port Colborne to Detroit and, finally, the river tour for assignments on the Detroit and St. Clair Rivers, a district that we share with our American colleagues. Now that I have provided you with an overview of the Canal , let me talk about the most important part Pilotage on the Canal ! Close Quarters Pilotage Really, Pilotage on the Canal is defined by one fundamental characteristic: in virtually everything that we do, we operate in a close quarters environment. As I just described, the locks that we operate in leave us just a few centimeters on each side! At the same time, the underkeel clearance at our disposal, once we are in, is normally less than one meter.

8 In the reaches and the lock wall approaches, the underkeel clearance can sometimes actually be even less than that as little as 30 centimeters! Obviously, this is an environment that doesn't leave any room for guesswork! (SLIDE 11: MEETINGS). -3- Pilotage on the Welland Canal - Remarks by Mike Burgess, Panama, April 2014. And things don't really get any better once you are out of a lock. The space you have at your disposal to operate when you meet another vessel is so restricted that in virtually every other district, the meeting would be deemed to have been a near-miss and you would have to file in an incident report. A near miss it may very well be but due to the skills of our Pilots the important word here is miss ; and no incident of any consequence has ever taken place on the Canal in respect of Pilotage . Of course, this is also an environment in which there is simply no space for tugs and mules.

9 So, it really is all about knowing the waters almost centimeter by centimeter and having very good shiphandling skills. It's also all about timing. (SLIDE 12: TIMING IS EVERYTHING!). Approaching a lock is especially delicate. We actually need to maneuver by literally sliding on the approach wall that is, we come in at a 15 degree angle and then we bring the whole vessel sliding alongside the wall. We then reach the elbow and, at that point one way or another we have got to get the stern off the wall. Normally on a fixed right hand propeller or a variable pitch left hand propeller, we use a stern movement to flush the stern off the wall, when upbound, which then takes speed off the ship and enables us to line up the entrance to the lock. (SLIDE 13: SLIDING 1). (SLIDE 14: SLIDING 2). (SLIDE 15: SLIDING 3). (SLIDE 16: SLIDING 4). Upbound transits may be especially intimidating.

10 This is so because the whole ship is boxed-in at the bottom of the lock, waiting to get lifted up in a matter of a few minutes 10 actually by the 80 million liters of water that pour in. (SLIDE 17: UPBOUND!). When entering the locks, we are more concerned about the superstructure during upbound transits than during downbound transits for obvious reasons since during downbound transits, most of the ship is above the lock, and the risk of damaging the superstructure is far less. -4- Pilotage on the Welland Canal - Remarks by Mike Burgess, Panama, April 2014. Coming in a lock during an upbound transit, with the concrete walls right in your face, the vessel's speed really should be less than one knot. Sideway inertia is also something you need to be careful about, so you must go in slowly in order to counter it. (SLIDE 18: DOWNBOUND!). In a downbound transit, you can go a little faster up to knot.

A Guide to Procurement at The Port Authority of … 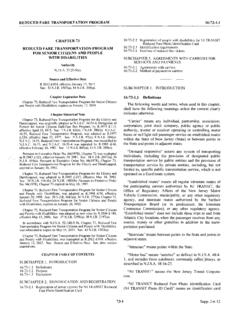 A safe and reliable transportation network remains vital to the economic success of New Jersey and the surrounding region. The theme for this year’s NJ TRANSIT annual report — 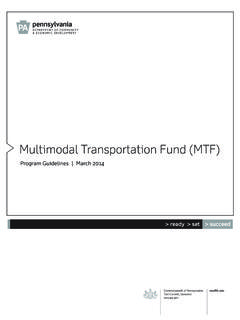