PITWM VERSE BY VERSE 1 matthew matthew 1:1-25 NEXT 2:1-9, 16-23 SYNOPSIS: 11:1 The Genealogy Of Jesus matthew was writing to the Jews, zeroing in on Jesus the Messiah, the King of the Jews. Now, because no Jew would accept a Messiah who did not meet the requirements of biology and birthplace, matthew is addressing that first. The genealogy of Jesus Christ shows that Jesus is the legal heir to the throne of David. matthew traces the roots of Jesus Christ in order to prove that He is the promised Messiah. 1:2 Son Of Abraham matthew starts with Abraham. God promised that Abraham was going to be the patriarch of a great nation. And in Abraham, all the families of the earth would be blessed. The Messiah would be the One to bless the nations of the earth. Son Of Isaac Abraham had two sons, Ishmael and Isaac.

PITWM VERSE BY VERSE 2 http://www.pitwm.net/pitwm-versebyverse.html MATTHEW redeemed back without a relative marrying her daughter-in-law Ruth.

1 PITWM VERSE BY VERSE 1 matthew matthew 1:1-25 NEXT 2:1-9, 16-23 SYNOPSIS: 11:1 The Genealogy Of Jesus matthew was writing to the Jews, zeroing in on Jesus the Messiah, the King of the Jews. Now, because no Jew would accept a Messiah who did not meet the requirements of biology and birthplace, matthew is addressing that first. The genealogy of Jesus Christ shows that Jesus is the legal heir to the throne of David. matthew traces the roots of Jesus Christ in order to prove that He is the promised Messiah. 1:2 Son Of Abraham matthew starts with Abraham. God promised that Abraham was going to be the patriarch of a great nation. And in Abraham, all the families of the earth would be blessed. The Messiah would be the One to bless the nations of the earth. Son Of Isaac Abraham had two sons, Ishmael and Isaac.

2 Son Of Jacob Isaac then had two sons, Jacob and Esau. Would God continue to narrow down the Messiah's lineage? Indeed! Balaam prophesied, Num. 24:17 "I see him, but not now; I behold him, but not near; A star shall come forth from Jacob, a scepter shall rise from " From ancient times, the Jews knew that this passage foretold of their coming Messiah, and that He would come through the line from Abraham, to Isaac, to Jacob. 1:3 Son Of Judah Jacob, being called Israel, had many sons, whose descendants became the twelve tribes of Israel. On his deathbed, Jacob continued to narrow down the Messianic line when he prophesied that the star to come forth from him, that same prophetic scepter, would come from one of his sons. Gen. 49:10 "The scepter shall not depart from Judah, nor the ruler s staff from between his feet, until Shiloh comes, and to Him shall be the obedience of the peoples.

4 Boaz becomes the knight in shining armor, the kinsman redeemer, by marrying Ruth and restoring the family land in Bethlehem. This becomes vitally important, since the prophet Micah would later prophesy, Mic. 5:2 "But as for you, Bethlehem Ephrathah, too little to be among the clans of Judah, from you One will go forth for Me, to be ruler in Israel. His goings forth are from long ago, from the days of eternity." Messiah the king, though existent from eternity past, would somehow come from Bethlehem. Son Of Jesse Ruth and Boaz were the grandparents of a man named Jesse. Once again, the lineage follows precisely. You see, Isaiah prophesied, :1-2 Then a shoot will spring from the stem of Jesse, and a branch from his roots will bear fruit. The Spirit of the Lord will rest on This descendant of Jesse, the Bethlehemite would be the Messiah, the king, not only of Israel, but of all the nations.

5 :10 Then in that day the nations will resort to the root of Jesse, Who will stand as a signal for the 1:6a Son Of David Jesse had eight sons, the youngest of whom was David. David grew up to be the King of Israel, and the prophecies continued to pour forth about the Messiah. The Word of the Lord to David :16 "Your house and your kingdom shall endure before Me forever; your throne shall be established forever." :11 The Lord has sworn to David a truth from which He will not turn back: Of the fruit of your body I will set upon your throne." The Messiah would be eternal, would rule on the throne of David, and would be a descendant of David. In Revelation, Jesus says, Rev. 22:16 "..I am the root and the descendant of David, the bright morning star." 1:6b-11 From Solomon To Jeconiah David had several sons.

6 Solomon was the one who became king, and matthew traces the genealogy through Solomon. However, there is a major problem here. You see, as the kingly line continued, ungodliness was rampant among most of Judah's kings, which reached a horribly low point when Jeconiah became king in 2 Kings 24. 2 Kings 24:9 He did evil in the sight of the Lord, according to all that his father had done. Enough was enough, and God cursed the king's blood line. Jer. 22:30 "Thus says the Lord, Write this man down childless, a man who will not prosper in his days; For no man of his descendants will prosper sitting on the throne of David or ruling again in Judah." Think about it: This curse should mean the end of all the promises. Now how can Messiah become king?

7 1:12-17 Joseph The kingly line of David descended to Joseph. Joseph's firstborn son would have the right to sit on David's throne, but God had cursed everyone with that bloodline. But wait: While Jesus had all legal rights to Joseph's lineage, He did not have the blood of that line, for He was born of a virgin, conceived in her womb by the Holy Spirit! Does this mean that Jesus is not truly the branch of Jesse, and the root of David? No! You see, the gospel of Luke also gives us Jesus' genealogy, but not through His legal line. Luke tells us His biological bloodline, which He had through His mother Mary. And Mary's line also descends through Abraham, Isaac, Jacob, and Judah, through Jesse to David. But from David, Mary's heritage did not extend through the kingly line of Solomon. Instead, she was a descendant of David's son Nathan.

8 Thus, according to Jewish Law, Jesus could legally inherit the throne, while completely avoiding the blood curse on Jeconiah's line! It is apparent that from eternity past, God had the whole thing worked out. He foretold of a specific Messiah, who could only be One: Jesus Christ. Jesus Christ accepted the title of messiah on three different occasions ( :17; :61; :26). The name Jesus shows him to be man. The name Christ shows him to be God s anointed, God s very own Son. PITWM VERSE BY VERSE 3 matthew Christ is Jesus official title. It identifies him officially as: Prophet ( :15-19) Priest ( :4) King ( :12-13) These officials were always anointed with oil, a symbol of the Holy Spirit who was to perfectly anoint the Christ, the Messiah ( :16; :10-11; :21-22; :32-33). Betrothed 1:18 Now the birth of Jesus Christ was on this wise: When as his mother Mary was espoused to Joseph, before they came together, Mary and Joseph were betrothed.

9 The betrothal is a promise of marriage, sort of like being engaged in modern society. However, the bond of the promise made was much stronger than a simple engagement. During the time of betrothal, although the couple is not joined physically, they are bound by a marriage covenant. To break the engagement would require a decree of divorce. There are three steps involved in a Jewish marriage: The engagement: the parents usually determined who a child was to marry often at a very early age. The betrothal: at a determined time the couple agreed with the engagement. If they followed through, the betrothal was immediately binding. A legal divorce was thereafter required. The betrothal lasted one year. When Joseph discovered Mary s pregnancy, they were already betrothed to one another. The marriage: the consummation of the couple took place.

10 It should be noted that in Joseph s case consummation did not occur until after Jesus birth. Before They Came Together And so Mary and Joseph are betrothed, but not united in physical contact. At this point in their relationship, she was found to be with child pregnant. But she had not committed the sin of adultery or had relations with any man. The adultery law said that a betrothed virgin who committed adultery was to be stoned to death ( :21-24). She was with child by the Holy Spirit before they were united in marriage. With Child By The Holy Spirit 1:18b ..she was found with child of the Holy Ghost. What does it mean "to be with child by the Holy Spirit?" The gospel of Luke explains that the angel Gabriel told Mary: Luke 1:31 "..you will conceive in your womb and bear a " When Mary inquired as to how this would happen, since she was a virgin, Luke 1:35 The angel answered and said to her, "The Holy Spirit will come upon you, and the power of the Most High will overshadow you; and for that reason the holy Child shall be called the Son of God. 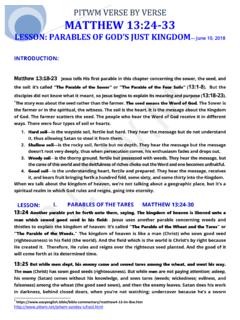 PITWM VERSE BY VERSE http://www.pitwm.net/pitwm-sunday-school.html 3. Any person who is judged to be righteous today may fall into sin later, years later. 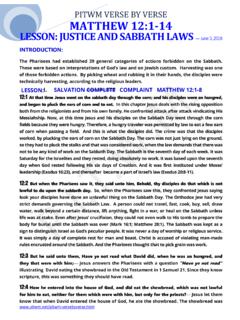 PITWM VERSE BY VERSE www.pitwm.net/pitwm-versebyverse.html to be eaten by the priest and his family, but David and his men were not priests and were 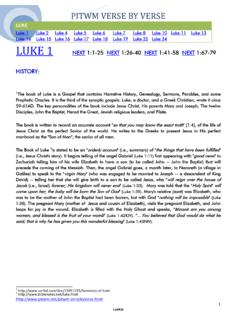 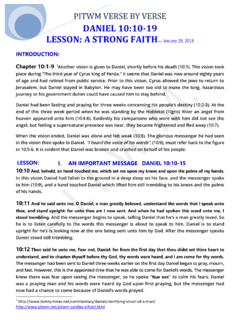 PITWM VERSE BY VERSE http://www.pitwm.net/pitwm-sunday-school.html prince of Persia, and when he’s done, the prince of Greece will come.There is still warfare going on 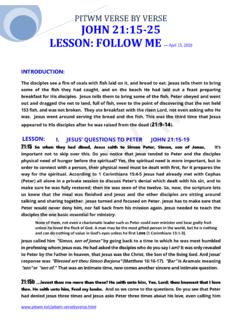 PITWM VERSE BY VERSE www.pitwm.net/pitwm-versebyverse.html by name Simon, son of Jonas? Jesus ask Peter, "Do you love Me more than these" (it’s either the other disciples or the fishing he went back to)? 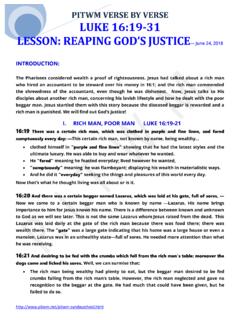 PITWM VERSE BY VERSE http://www.pitwm.net/pitwm-sundayschool.html IV. REVELATION SUFFICIENT LUKE 16:29-31 16:29 Abraham saith unto him, They have Moses and the prophets; let them hear them. 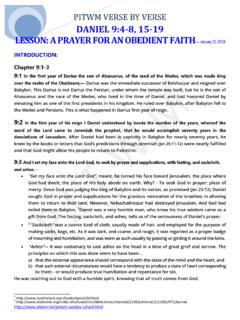 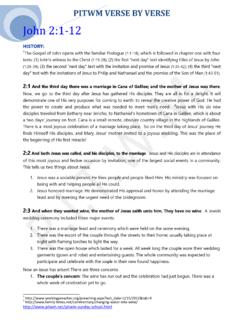 PITWM VERSE BY VERSE http://www.pitwm.net/pitwm-sunday-school.html change things and do so miraculously. 2:12 After this he went down to Capernaum… 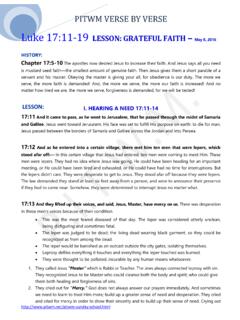 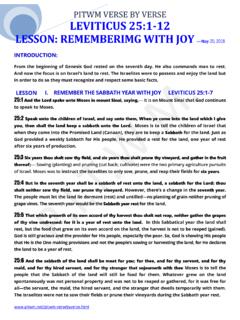 LESSON: REMEMBERIMG WITH JOY ... shall rest, but the food that grew on its own accord on the land, the harvest is not to be reaped. God

Bible Study Guide on the Gospel of Matthew

Gospel, The gospel of matthew, Matthew The Gospel of Matthew: Jesus as the New Moses

Jesus, Gospel, The gospel of matthew, Matthew, Jesus as 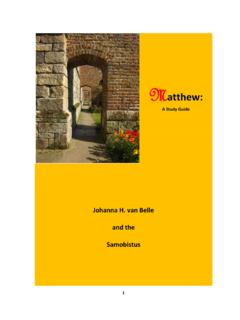 7 A Study of the Gospel of Matthew For more than three decades a group of people from the Seattle First Christian Reformed Church has come together at 7 a.m. on Saturday morning to pray, eat, and study the Bible.

Gospel, The gospel of matthew, Matthew

Differences Between the Gospel of John and the … 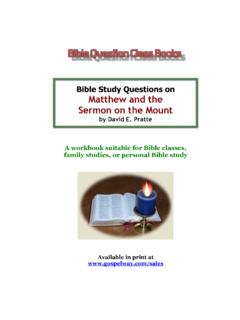 Bible Study Questions on Matthew and the Sermon …

Workbook on Matthew Page #4 Bible Study Questions on Matthew and the Sermon on the Mount Introduction: This workbook was designed for Bible class study, family study, or personal study. 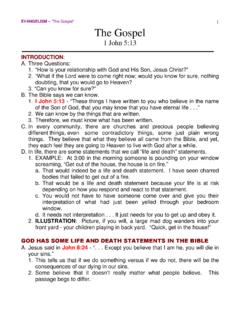 EVANGELISM – “The Gospel” 3 a. The Bible says in 1 Timothy 2:5 - “For there is one God and one Mediator between God and men, the Man Christ Jesus.”

Matthew . Eight Lessons (Chapter-by-Chapter) Bible Study Course “Study to shew thyself approved unto God, a workman that needeth not to be ashamed,