Plant Guide by this species is large-scale ecosystem modification CHINESE PRIVET due to its ability to successfully compete with and Ligustrum sinense Lour. displace native vegetation. Chinese privet PLANTS Plant Symbol = LISI mature rapidly and are prolific seed producers. They also reproduce vegetatively by means of root suckers. Contributed by: USDA NRCS National Plant Data Once established, Chinese privet is difficult to Center & Louisiana State University- Plant Science; eradicate because of its reproductive capacity. partial funding from the US Geological Survey and the US National Biological Information Impact/Vectors: Ligustrum sinense is native to China Infrastructure and was introduced into the United States in 1852 for use as an ornamental shrub.

The species is a major threat to natural landscapes. An example of Chinese privet’s ability to push a native species closer to extinction is noted in the

1 Plant Guide by this species is large-scale ecosystem modification CHINESE PRIVET due to its ability to successfully compete with and Ligustrum sinense Lour. displace native vegetation. Chinese privet PLANTS Plant Symbol = LISI mature rapidly and are prolific seed producers. They also reproduce vegetatively by means of root suckers. Contributed by: USDA NRCS National Plant Data Once established, Chinese privet is difficult to Center & Louisiana State University- Plant Science; eradicate because of its reproductive capacity. partial funding from the US Geological Survey and the US National Biological Information Impact/Vectors: Ligustrum sinense is native to China Infrastructure and was introduced into the United States in 1852 for use as an ornamental shrub.

2 It is used for hedge and mass plantings, and sometimes as single specimens for its foliage and its profusion of small white flowers (Dirr 1990; Wyman 1973). It continues to be widely sold in the nursery and gardening industry. The foliage of Chinese privet is also used, presumably, for cut-flower arrangements. This horticultural introduction has been cultivated for a relatively long time in the United States. Wyman (1973) reports that this species is still growing as a hedge on the old Berkman's Nursery grounds in Augusta, Georgia, where it was planted in the early 1860's. It was planted on the Chickamauga and Chattanooga National Military Park after it came under the control of the Secretary of War in 1890. Present day PLANTS are descendants of those early plantings (Faulkner et al.)

3 1989). According to Small (1933), the species was escaping from cultivation in southern Louisiana by the 1930's. A survey of appropriate herbaria reveals collection records from Georgia as early as 1900. Based on herbarium records the species has become naturalized and widespread in the southeast and eastern during the 1950's, 60's, and 70's. Taylor et al. (1996) notes the rapid, recent spread of Ligustrum sinense in Oklahoma. Peterson USDA, NRCS, NPDC. Uses Weed (very invasive in the southern US), ornamental Noxiousness Chinese privet was introduced into the United States from China for ornamental planting. Having escaped from cultivation, it is now naturalized throughout the southeastern United States. The greatest threat posed Plant Materials < >.

4 Plant Fact Sheet/ Guide Coordination Page < >. National Plant Data Center < >. The species is a major threat to natural landscapes. The species persists on abandoned home sites and An example of Chinese privet's ability to push a can readily invade abandoned lots and farmlands native species closer to extinction is noted in the where it forms impenetrable thickets. It becomes recovery plan for Schweintz's sunflower (Helianthus especially abundant along fencerows, stream, bayou, schweinitzii). This endangered species is known and forest margins, and it has the ability to invade from about 16 populations on the piedmont of the forests (Godfrey 1988). Carolinas. Residential and commercial development and the invasion of aggressive exotics, such as Chinese privet reproduces by sexual and vegetative Ligustrum sinense, represent the greatest threats for means.

5 Seeds, produced in great abundance, are this species ( Fish and Wildlife Service 1992). spread by birds (McRae 1980). Landscape plantings Similar observations about the competitive provide seed sources for establishment in disturbed characteristics of Chinese privet have been noted in habitats. Soil disturbances of all sorts such as forest various Nature Conservancy reports in the Southeast. clearing, abandoned agricultural lands, and fence Removal of Chinese privet from natural areas is construction provide opportunities for colonization problematic and essential for their restoration (News by Chinese privet. Natural disturbances for example from Volunteers of the Nature Conservancy, North tree falls, erosion, animal excavations, etc.)

6 Provide Carolina Chapter and the Louisiana Chapter, pers. similar colonization opportunities. The PLANTS also comm. 1997). have the ability to reproduce vegetatively from root suckers. Once established, Chinese privet is difficult In addition to the privet's impact on natural to control because of the huge seedbank and the need landscapes, it can be directly harmful to humans. All to remove underground parts as well. Because of introduced species of Ligustrum produce fruit toxic to these characteristics, the major impact of Chinese humans that cause such symptoms as nausea, privet is its ability to displace native species and headache, abdominal pain, vomiting, diarrhea, disrupt various terrestrial ecosystems. weakness, and low blood pressure and body temperature.

7 Where Chinese privet occurs in Status abundance, floral odors may cause respiratory Please consult the PLANTS Web site and your State irritation (Westbrooks & Preacher 1986). Chinese Department of Natural Resources for this Plant 's privet is sold in nurseries and is often included on current status, such as, state noxious status and recommended planting lists or other literature wetland indicator values. produced by cooperative extension services without mention of its invasive nature. Named cultivar Description selections have been developed (Bailey and Bailey General: Olive Family (Oleaceae). Chinese privet is 1976). a shrub or small tree that may grow to as much as 30. feet tall although its Chinese privet grows in a wide variety of habitats and typical height ranges from can tolerate a wide range of soil and light conditions, 5 to 12 feet.

8 If flowering, but it grows best in mesic soils and abundant sunlight its blossoms are very but can tolerate lower light conditions (Thomas 1980; aromatic. Its root system Bailey & Bailey 1976). Few woody PLANTS offer an is shallow but extensive. easier test of gardeners' skills. Suckers are readily produced and the PLANTS can spread vegetatively in this fashion. The PLANTS branch abundantly and the branches typically arch L. Urbatsch Petiole, axillary bud, gently downward. Its stem with spreading twigs are usually densely hairy (pubescent) when young, and the Plant hairs (trichomes) spread at right angles from the twig surface. Raised, tan-colored lenticels are also evident on the twig's surface. Chinese privet leaves are L.

9 Urbatsch evergreen to semi-deciduous and are oppositely Leaves with developing fruit. arranged (two leaves per node) along the stem on nodes that are usually less than one inch apart. The leaf stalk (or petiole, shown below) is about one- eighth inch long and covered with hairs. Leaf blades Chinese privet thrives in wet to dry habitats. It are elliptical in shape and are up to one inch wide and persists around old home sites and flourishes along about two inches long. Leaf margins lack teeth fencerows, and stream and forest margins where it (entire). The upper leaf blade surfaces are glabrous forms impenetrable, monocultural thickets. For (without hairs) at maturity. Hairs occur along the current distribution, please consult the Plant Profile midvein (see photo below) and sometimes on branch page for this species on the PLANTS Web site.

10 Veins of the lower surfaces. Control The flowers occur in It is recommended that you contact your local numerous, cone- agricultural extension specialist and/or county weed shaped, branching specialist for control measures pertinent to your area. clusters (panicles) two to four inches long Various control measures have been reported for that profusely cover Chinese privet. For small areas and for relatively the shrub when L. Urbatsch small PLANTS , hand removal is effective. Digging flowering. A short, Developing fruit & cuplike calyx of tools such as a mattock are useful for removing fused petals. slender stalk (pedicel) underground parts. Broken root fragments need to be supports each flower. The green calyx consists of removed because of their ability to re-sprout.

after seeding to kill everything green and growing. Other herbicide weed control options are also available. Consult with the local extension service or Land Grant 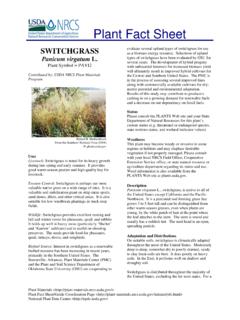 current distribution map, please consult the Plant Profile page for this species on the PLANTS Website. Establishment Switchgrass should be seeded in a pure stand when 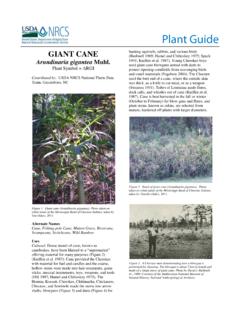 of giant cane, Arundinaria gigantea ssp. macrosperma: “It produces an abundant crop of seed with heads like those of broom corn. The seeds are farinaceous and are said to be not much inferior to wheat, for which the Indians and occasionally the first settlers substituted it.” Giant cane also has 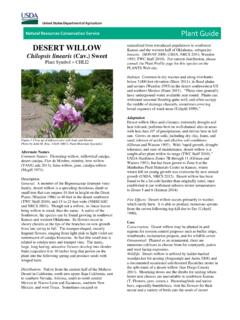 ‘Hope’ produces white flowers with a yellow throat. It was released in 1980, by the NMSUASC and the Los Lunas PMC for its low water requirement over commercially available trees and shrubs (USDA, NRCS 1982b). ‘Regal’ was released in 1988 by the NMPMC, 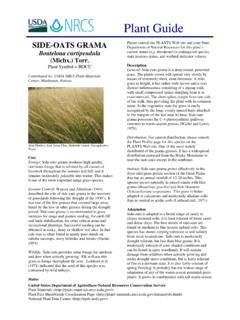 Side-oats grama produces high quality, nutritious forage that is relished by all classes of livestock throughout the summer and fall, and it remains moderately palatable into winter. 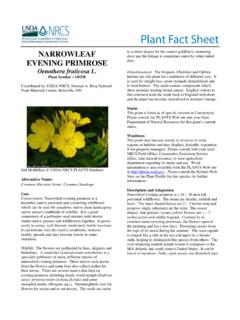 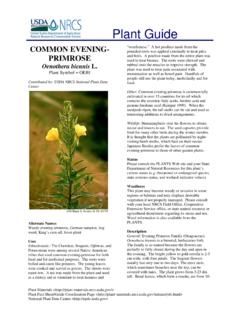 30 cm long. The stem has alternate, lanceolate-shaped leaves, 2.5-15 cm long, that are shallowly toothed and wavey at the edges. The leaves are 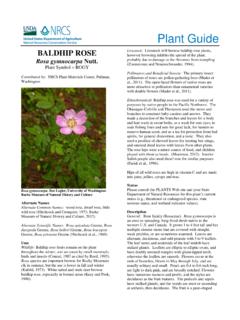 Rosa species ends of branches, bloom in May through July, and are are important browse for Rocky Mountain elk in summer, but the use is lower in fall and winter usually solitary and small. 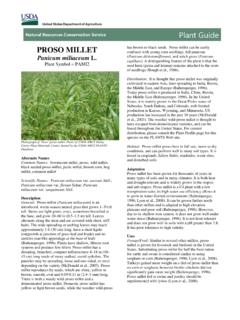 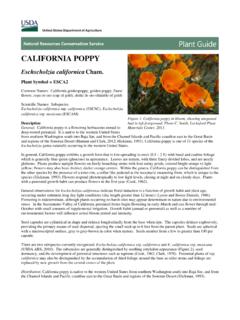 The California poppy has cultural significance for many indigenous people of the western United States including the Luiseno, Cahuilla, Costanoan and Pomo tribes. While some tribes consider the plant poisonous, such as the Mahuna, most